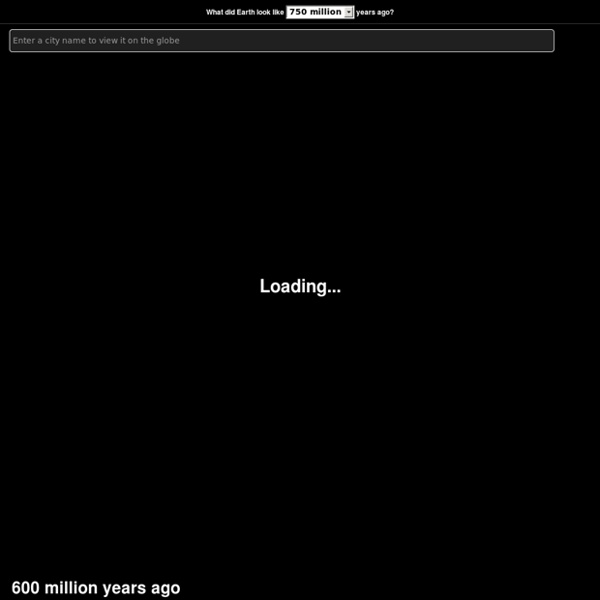 Background Ambience Generator ♥ I'm a scholar of 14th c. Italian music and a huge Eco/Name of the Rose fan -- when someone sent this to me, I expected it to be super cheesy -- new age notions of medieval sounds + Robin Hood: Prince of Thieves, etc. etc. Instead, I'm super captivated. This is amazing. Thank you! The heat is on over the climate crisis. Only radical measures will work Drowned cities; stagnant seas; intolerable heatwaves; entire nations uninhabitable… and more than 11 billion humans. A four-degree-warmer world is the stuff of nightmares and yet that’s where we’re heading in just decades. While governments mull various carbon targets aimed at keeping human-induced global heating within safe levels – including new ambitions to reach net-zero emissions by 2050 – it’s worth looking ahead pragmatically at what happens if we fail.

Welcome to Mystery Flesh Pit National Park, One Redditor’s Colossal Feat of Worldbuilding If you took the most Cronenbergian episodes of The Magic School Bus, blended them in a cosmic meat smoothie with the avanc from China Miéville’s The Scar, and then sprinkled in some good ol’ American tourist trap schlock, you still might not approach the eldritch delights of Mystery Flesh Pit National Park, located just south of Odessa, Texas, off Highway 20. As the name suggests, it’s a giant flesh tunnel opening through the Earth’s epidermis, dermis, hypodermis, and more, revealing colossal esophagi and leviathan spleen. As you descend, you may encounter “spasm fits” and “gastric ejecta” or feel your bodily moisture being “leeched.” Deviate from the marked trails and you risk digestion, lethal entanglement with “Macrobacteria” and “Abyssal Copepods,” or a splattering of “amniotic secretions.”

Yes, the Climate Crisis May Wipe out Six Billion People “Carbon emissions may continue to rise, the polar ice caps may continue to melt, crop yields may continue to decline, the world’s forests may continue to burn, coastal cities may continue to sink under rising seas and droughts may continue to wipe out fertile farmlands, but the messiahs of hope assure us that all will be right in the end. Only it won’t.” — Chris Hedges One thing the climate crisis underscores is that Homo sapiens are not primarily a rational species. When forced to make important decisions, particularly decisions affecting our economic security or socio-political status, primitive instinct and raw emotion tend to take the upper hand. This is not a good thing if the fate of society is at stake. Take “hope” for example. Collaborative World Building: Dawn of Worlds My new campaign is starting this weekend, and my group opted to make use of Dawn of Worlds to design the game world. Dawn of Worlds is a collaborative world building system for use with RPGs, novels, or anything else for which you’d need a world. It’s system neutral which makes it useful for anyone, and it’s a lot of fun in it’s own right. We used Dawn of Worlds for a number of reasons, and coming away from it, I can say I’ve learned a few things about the best use of the system. The basic concept of how Dawn of Worlds works is like this: Each turn, each player gets a number of points.

At 4°C of warming, would a billion people survive? What scientists say. by David Spratt In a way it’s an obscene question: if the planet warms by 4 degrees Celsius (°C), would only a billion people survive and many billions perish? Obscene in the sense of the obscenity of arguing about the exact body count from a genocide. In the end it’s about the immorality, the crime, the responsibility, not the precise numbers. These 4 Ancient Apocalypses Changed the Course of Civilization - The Crux Life, as they say, goes on. Until one day it doesn’t. For ancient societies, without the means to predict natural disasters, destruction could often come suddenly and completely by surprise. Below are four of the most devastating natural events in recorded human history, and the societies that they wiped off the map. The Storegga Slides

World's richest 10% produce half of global carbon emissions, says Oxfam The richest 10% of people produce half of Earth’s climate-harming fossil-fuel emissions, while the poorest half contribute a mere 10%, British charity Oxfam said in a report released Wednesday. Oxfam published the numbers as negotiators from 195 countries met in Paris to wrangle over a climate rescue pact. Disputes over how to share responsibility for curbing greenhouse-gas emissions and aiding climate-vulnerable countries are among the thorniest and longest-running issues in the 25-year-old UN climate process. “Rich, high emitters should be held accountable for their emissions, no matter where they live,” Oxfam climate policy head, Tim Gore, said in a statement. “But it’s easy to forget that rapidly developing economies are also home to the majority of the world’s very poorest people and while they have to do their fair share, it is rich countries that should still lead the way.” “We hope advanced nations will assume ambitious targets and pursue them sincerely.

What if Earth were a super-Earth? For nearly four years, NASA's Kepler spacecraft whisked through space, surveying our corner of the galaxy. It monitored more than 150,000 stars, looking for planets about the size of Earth that belonged to other solar systems. The mission didn't disappoint; Kepler found countless examples of a type of planet known as a super-Earth. These faraway planets might remind you of home — they're rocky, smaller than gas giants, located near their star and sport a relatively thin atmosphere. But they're way larger than the blue marble: These super-Earths are a honking two to 10 times bigger than our Earth. Because there are so many super-Earths out there, it begs the question: What would happen to our planet if it were two or even 10 times the size it is now?

Old Disease Names By Sylvain Cazalet Old Disease Names By Sylvain Cazalet This is a glossary of terms used to describe diseases in times gone by. I have generally, but not invariably, omitted terms that can be found in a modern medical dictionary. I have also included a few terms that appear in Bills of Mortality that are not strictly diseases. (1) A * B * C * D * E * F * G * H * I * J * K * L * M * N * O * P * Q * R * S * T * U * V * W * X * Y * Z A Abasia: Hysterical inability to walk or stand. Abdominal Angina: Term used to describe recurrent, severe and sudden abdominal pain in the elderly. Peak Everything: Eight Things We Are Running Out Of And Why Getty ImagesWhy is everything running out at the same time? We did a series on Planet Green where we looked at why those basic things that we take for granted, like water, food and fuel are getting expensive and scarce, all at once.Peak Corn: Blame Earl Butz. Richard Nixon and Gerald Ford's Secretary of Agriculture brought in the Farm Bill that dramatically increased the amount of corn produced in America. He encouraged farmers to "get big or get out," and to plant crops like corn "from fence row to fence row." Further billions in subsidies to farmers encouraged production, and soon America was awash in cheap grain, and with it cheap meat.

Flood Map: Water Level Elevation Map Please support this site by sharing it with your friends and followers Disclaimer: Please note that just this elevation flood map is not sufficient enough in full extent for the analysis since there are many other factors like surface runoff, flow diversion, land type etc. are also responsible for the flood coverage along with elevation. But we think this flood map should help in some extent in the following areas: