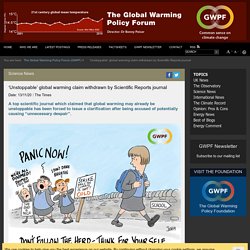 After being strongly criticised by leading British scientists, the journal issued a revised press release which admitted that the prediction was based on a particular computer model and said the results should be tested by “alternative models”. The study says that even if man-made greenhouse gas emissions were to reduce to zero this year, global temperatures would still be about 3C warmer and sea levels 2.5m higher by 2500 compared with 1850.

Richard Betts, professor of climate impacts at the University of Exeter, criticised the press release and questioned the study’s conclusions, saying there was a risk of the public being given a “frightening message” that was misleading. Full story (£) 210 Shares Share Tweet Pin. We still Have a Chance? Norwegian Climate Doomsday Authors Issue a “Clarification” Guest essay by Eric Worrall A few days ago WUWT reported on a Norwegian “past the point of no return” global warming paper whose outlook was so pessimistic even climate alarmists were upset. 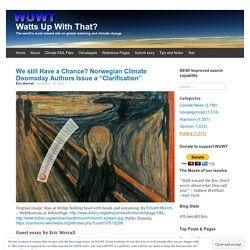 The authors now appear to have responded to academic pressure, and have publicly accepted that it is never too late to pay the penalty for our climate sins by taking expensive remedial action. NEWS RELEASE 12-NOV-2020Climate change: Ending greenhouse gas emissions may not stop global warmingSCIENTIFIC REPORTSPlease note that this press release was updated to provide clarity on the model used in this study.

The changes are highlighted in bold.Even if human-induced greenhouse gas emissions can be reduced to zero, global temperatures may continue to rise for centuries afterwards, according to a reduced complexity model of the global climate between 1850 and 2500 published in Scientific Reports. Like this: Like Loading... Related. Say Bye Bye Trees: Climate Scientists Finally Claim We Passed a “Tipping Point” Guest essay by Eric Worrall According to an outpouring of ecological grief from Inside Climate News, the Aussie bushfires are a sign all the trees in the world are about to die from heat stress and fire. 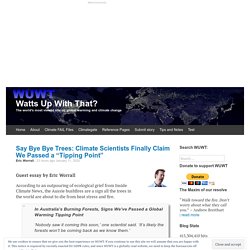 In Australia’s Burning Forests, Signs We’ve Passed a Global Warming Tipping Point‘Nobody saw it coming this soon,’ one scientist said. ‘It’s likely the forests won’t be coming back as we know them.’BY BOB BERWYN, INSIDECLIMATE NEWSJAN 8, 2020As extreme wildfires burn across large swaths of Australia, scientists say we’re witnessing how global warming can push forest ecosystems past a point of no return.Some of those forests won’t recover in today’s warmer climate, scientists say.

The truth of course is such claims are just as absurd as “end of snow” predictions. Tipping Points Confuse Social and Earth Science. In the drive to push public opinion over the top regarding global warming/climate change, the media is increasingly filled with references to climate “tipping points.” 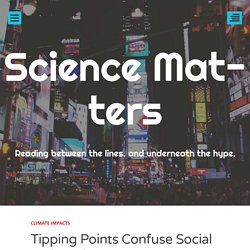 For example, some months ago an IPCC spokesperson claimed a climate disaster is now happening each and every week. And the media abounds with reports to press home the point. Nine climate tipping points now ‘active,’ warn scientists. No, I don’t see a “climate communication” blitz in the run up to the latest UN Climate Change Conference or anything like….that. 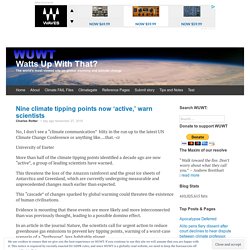 ~cr University of Exeter More than half of the climate tipping points identified a decade ago are now “active”, a group of leading scientists have warned. This threatens the loss of the Amazon rainforest and the great ice sheets of Antarctica and Greenland, which are currently undergoing measurable and unprecedented changes much earlier than expected. Guardian Climate emergency: world ‘may have crossed tipping points’ Guest essay by Eric Worrall According to The Guardian, tipping points leading to irreversible climate harm and an existential threat to our civilisation may have already been crossed, though there is still time to try to undo some of the damage. 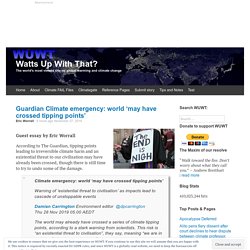 Climate emergency: world ‘may have crossed tipping points’Warning of ‘existential threat to civilisation’ as impacts lead to cascade of unstoppable eventsDamian Carrington Environment editor @dpcarringtonThu 28 Nov 2019 05.00 AEDTThe world may already have crossed a series of climate tipping points, according to a stark warning from scientists. This risk is “an existential threat to civilisation”, they say, meaning “we are in a state of planetary emergency”.

…The planet has already heated by 1C and the temperature is certain to rise further, due to past emissions and because greenhouse gas levels are still rising. The quoted Nature article is like the Guardian article, except not as well written – basically a flat demand we do what we are told. Climate ‘limits’ and timelines. Larry Kummer has a post today Did the IPCC predict a climate apocalypse? 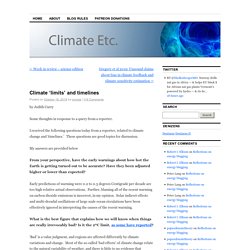 No. Excerpts from the IPCC Special Report on 1.5C, Summary for Policy makers. B1. Climate models project robust differences in regional climate characteristics between present-day and global warming of 1.5°C, and between 1.5°C and 2°C. 30 Year Anniversary of the UN 1989 “10 years to save the world” Climate Warning. Guest essay by Eric Worrall Global warming was not reversed by the year 2000 – yet we are still here. 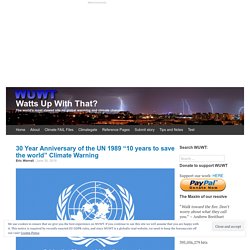 U.N. Predicts Disaster if Global Warming Not CheckedPETER JAMES SPIELMANN June 30, 1989UNITED NATIONS (AP) _ A senior U.N. environmental official says entire nations could be wiped off the face of the Earth by rising sea levels if the global warming trend is not reversed by the year 2000. Coastal flooding and crop failures would create an exodus of ″eco- refugees,′ ′ threatening political chaos, said Noel Brown, director of the New York office of the U.N. 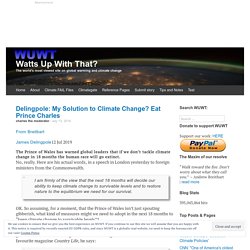 We have 18 months to save world, Prince Charles warns Commonwealth leaders. From The Telegraph Hannah Furness, Royal Correspondent 11 July 2019 • 9:00pm The Prince of Wales has warned global leaders they have 18 critical months to solve climate change and restore the balance of nature, ensuring the survival of the human race. 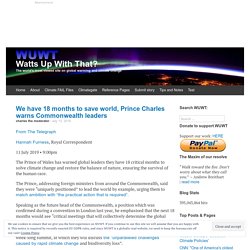 The Prince, addressing foreign ministers from around the Commonwealth, said they were “uniquely positioned” to lead the world by example, urging them to match ambition with “the practical action that is required”. Speaking as the future head of the Commonwealth, a position which was confirmed during a convention in London last year, he emphasised that the next 18 months would see “critical meetings that will collectively determine the global agenda for the coming decade”. 18 Months To Save The Planet, Says Potty Matt McGrath! By Paul Homewood Matt McGrath is getting even more paranoid! Do you remember the good old days when we had "12 years to save the planet"? Now it seems, there’s a growing consensus that the next 18 months will be critical in dealing with the global heating crisis, among other environmental challenges. Last year, the Intergovernmental Panel on Climate Change (IPCC) reported that to keep the rise in global temperatures below 1.5C this century, emissions of carbon dioxide would have to be cut by 45% by 2030.

Climate change: 12 years to save the planet? Make that 18 months. From The BBC Matt McGrath Environment correspondent@mattmcgrathbbc on Twitter 24 July 2019. Leading German Geologist Calls Notion Of “Climate Tipping Points” Scientific Hype By Opportunistic Scientists. The European Institute for Climate and Energy (EIKE) posted a video of prominent German geologist Dr. Stefan Kröpelin, who in a presentation late last year in Munich called the notion of CO2-induced climate tipping points scientifically outlandish. Climate change tipping point could be coming sooner than we think. IT WORSE THAN WE THOUGHT!

Top German climate modeler, Jochem Marotzke, Director of the Hamburg-based Max Planck Institute for Meteorology. Spiegel wrote in its sub headline: Or in other words, German skeptics Dr. Yes, the climate goalposts just got moved back once again. The ever receding climate goalpost: IPCC and Al Gore “12 years to save the planet” (again) Ah, it’s beginning to sound like a broken record. The same message over and over again. It’s as if these folks don’t pay attention to history. The United Nations has once again issued another dire climate change report (SR15, see it here) claiming we must act before it’s too late.

Summary here. Climate Tipping Points Edition — Manhattan Contrarian. On Monday the UN IPCC came out with its latest Special Report, this one supposedly addressed specifically to the allegedly dire consequences of allowing world temperatures to increase by more than an arbitrarily-selected threshold. MIT: Climate tipping point busted – globe needs to reach 152°F before runaway greenhouse effect kicks in. Current trend of “global warming” isn’t enough to get there, says MIT scientist. How Earth sheds heat into space. UN claims yet another moving climate goalpost we’ll never reach. Global warming doomsday fails to arrive, deadline moved to 2035. Climate alarmists claim in a newly published study that the world will reach a “point of no return” if there is no dramatic reduction in greenhouse gas emissions by 2035.

End Of The World Gets Pushed Back Another 20 Years.