Fires in the Amazon Rainforest 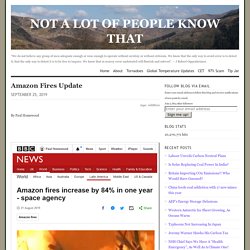 The National Institute for Space Research (Inpe) said its satellite data showed an 84% increase on the same period in 2018. It comes weeks after President Jair Bolsonaro sacked the head of the agency amid rows over its deforestation data. Amazon Fire History Since 2003. We are told that Amazon fires are at record levels right now. 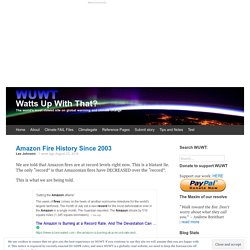 This is a blatant lie. The only “record” is that Amazonian fires have DECREASED over the “record”. This is what we are being told. This (is) what the data actually looks like, to August 22. Yes, its updated daily. Amazon Fires Update. News Brief by Kip Hansen The news channels, newspapers, news sites and the Twit-o-verse are full of “the Amazon is burning!” 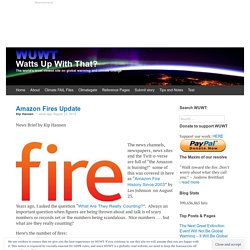 Some of this was covered in here as “Amazon Fire History Since 2003” by Les Johnson on August 23. Years ago, I asked the question “What Are They Really Counting?”. Always an important question when figures are being thrown about and talk is of scary numbers or records set or the numbers being scandalous. Nice numbers . . . but what are they really counting? Here’s the number of fires: This year, 2019, as of 21 August, is running a hair below 2016. But for current Amazon fires, we want to know: not just the number of fires (for which the NY Times has quite a different number than Global Fire Data, which is shown above). . . .but instead:

False Alarm: Amazon Burning Is Mostly Farms, Not Forests. Problematic deforestation continues, but the “lungs of the earth” are still breathing. 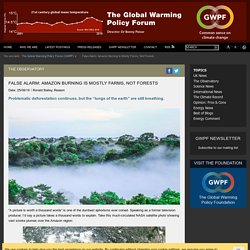 “A picture is worth a thousand words” is one of the dumbest aphorisms ever coined. Speaking as a former television producer, I’d say a picture takes a thousand words to explain. Take this much-circulated NASA satellite photo showing vast smoke plumes over the Amazon region: Amazon Fires are in…the Amazon. This is a post in reply to Nick Stokes criticism of using the entire Amazon for fire statistics, rather than just using the state of Amazonas. 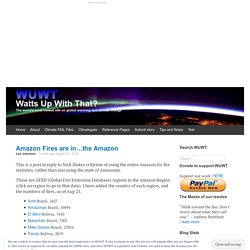 These are GFED (Global Fire Emissions Database) regions in the Amazon Region (click on region to go to that data). Bolivia’s Wildfires Ignored By The BBC. By Paul Homewood h/t Mr GrimNasty I doubt whether you’ll see this on the BBC: Up to 800,000 hectares of the unique Chiquitano forest were burned to the ground in Bolivia between August 18 and August 23. 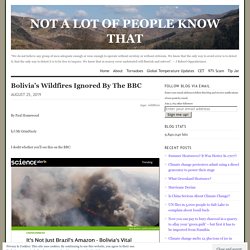 That’s more forest than is usually destroyed across the country in two years. Experts say that it will take at least two centuries to repair the ecological damage done by the fires, while at least 500 species are said to be at risk from the flames. Amazon Fires Scare Backfires. While climate change has been blamed for the fires, NASA attributed the blazes more to farm activity than drought. 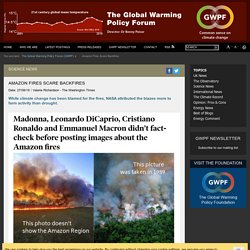 Every year, farmers in the Amazon set fires to clear agricultural land during the dry season starting in August, but this year may be a record-setter, not for the number of fires, but for the global outrage. The G-7 nations pledged Monday about $40 million to help fight fires in the Amazon rainforest in response to the outcry from celebrities, media outlets and leaders like French President Emmanuel Macron, who said the blazes represented an “international crisis.” Climate scientist Roy Spencer had another term for the fires: “normal agriculture.” I think the media focus on this is misplaced and exaggerated, as is virtually every weather-related story that appears these days,” said Mr. Spencer, a former NASA scientist who does consulting on global crop-market forecasting. Full story 329 Shares Share Tweet Pin. Selective and Misplaced Outrage at Brazil’s President Bolsonaro over Amazonian Fires. 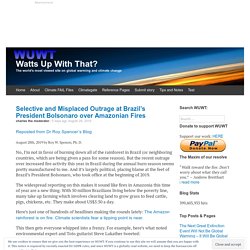 Spencer, Ph. D. No, I’m not in favor of burning down all of the rainforest in Brazil (or neighboring countries, which are being given a pass for some reason). The most dangerous thing about the Amazon fires is the apocalyptic rhetoric. Cristiano Ronaldo is a Portuguese expert on forests who also plays football, so when he shared a picture online of a recent forest fire in the Amazon, it went viral. 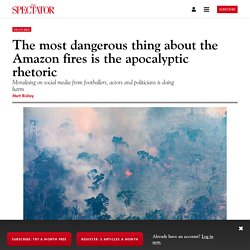 Perhaps he was in a rush that day to get out of the laboratory to football training, because it later transpired that the photograph was actually taken in 2013, not this year, and in southern Brazil, nowhere near the Amazon. But at least his picture was only six years old. Emmanuel Macron, another forest ecologist who moonlights as president of France, claimed that ‘the Amazon rainforest — the lungs which produce 20 per cent of our planet’s oxygen — is on fire!’

Alongside a picture that was 20 years old. A third bioscientist, who goes under the name of Madonna and sings, capped both their achievements by sharing a 30-year-old picture. Now imagine if some celebrity — Donald Trump, say, or Nigel Lawson — had shared a picture of a pristine tropical forest with the caption ‘Amazon rainforest’s doing fine!’