Adam Schiff’s False Accusations. (by Katie Pavlich, Townhall) — The man chosen by House Speaker Nancy Pelosi to lead the Democrats’ impeachment efforts against President Trump not only lacks credibility but is deeply dishonest and corrupt. 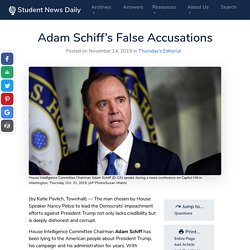 House Intelligence Committee Chairman Adam Schiff has been lying to the American people about President Trump, his campaign and his administration for years. With subpoena power handed over after Republicans lost the House in 2018, he’s become more emboldened to use deception and smears to meet his political goals. In March, Schiff went on national television to declare “ample evidence” of collusion or conspiracy between the Trump campaign and the Russia government was “in plain sight.”

This wasn’t true. 33 Trillion More Reasons Why The New York Times Gets it Wrong on Russia-gate. Further research shows The New York Times was even further off the mark in blaming Russian social media for Trump’s win, as Gareth Porter reports. 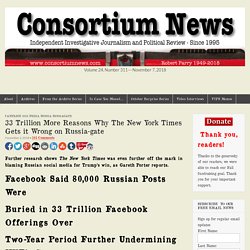 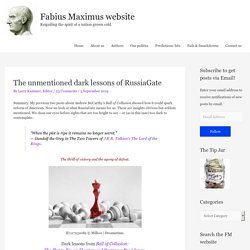 Now we look at what RussiaGate means for us. These are insights obvious but seldom mentioned. We close our eyes before sights that are too bright to see – or (as in this case) too dark to contemplate. “When the plot is ripe it remains no longer secret.” — Gandolf the Grey in The Two Towers of J.R.R. Some revelations from RussiaGate that can change America. Summary: Here are excerpts from Andrew McCarthy’s Ball of Collusion, showing how its revelations about RussiaGate can change how Americans see our government. 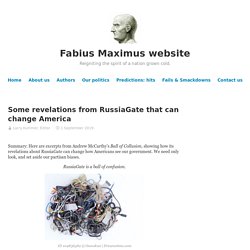 We need only look, and set aside our partisan biases. RussiaGate is a ball of confusion. Some insights from Ball of Collusion: The Plot to Rig an Election and Destroy a Presidency By Andrew McCarthy (issued 13 August 2019). He is a former Deputy US Marshall and Asst. Every new insight is an opportunity to change ourselves. . (1) RussiaGate is a parade of lies by government officials.

Lies by high officials and politicians are business as usual in America (see examples in the big list of lies). James Comey – Deputy Attorney General, Director of the FBI.John Brennan – Director of the CIA, Assistant to President Obama.James Clapper – USAF Lt. . (2) Washington is a cesspool. This is a commonplace in history. . (3) Our news media are conduits for propaganda.

Bowman: the news has become a stream of ironies. Summary: RussiaGate has shown the major news media to be another American institution in rapid decay. 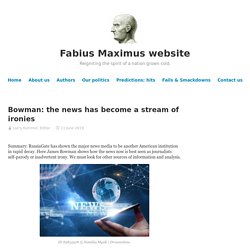 Here James Bowman shows how the news now is best seen as journalists self-parody or inadvertent irony. We must look for other sources of information and analysis. Excerpt from “Irony of Ironies“ By James Bowman at his website, 11 June 2019. Craig Murray explains the Muellergate Scandal. Summary: Former UK ambassador Craig Murray looks at oddities in Mueller’s investigation of RussiaGate. 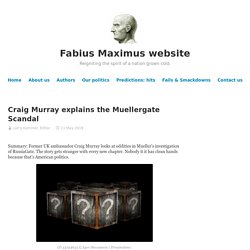 The story gets stranger with every new chapter. Nobody it it has clean hands because that’s American politics. “The Real Muellergate Scandal“ By Craig Murray at his website, 9 May 2019. Posted with his generous permission. Robert Mueller is either a fool, or deeply corrupt. I did not comment instantly on the Mueller Report as I was so shocked by it, I have been waiting to see if any other facts come to light in justification. On the DNC leak, Mueller started with the prejudice that it was “the Russians” and he deliberately and systematically excluded from evidence anything that contradicted that view.

Mueller, as a matter of determined policy, omitted key steps which any honest investigator would undertake. That is precisely the equivalent of the police receiving a phone call saying: Consortium News’ Record on Russia-gate—How CN Covered the ‘Scandal’: No. 4—“The Democratic Money Behind Russia-gate” 8 Cases That Show the FBI and CIA Were Out of Control Long Before Russiagate. Peter van Buren shows the path to RussiaGate. System Fail. It will take weeks for the elite pundit class to unravel all the possible implications and subtexts embedded in Robert Mueller’s final report on the charge that Donald Trump and his team colluded with Russia to fix the 2016 election. 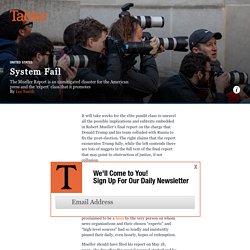 The RussiaGate story implodes. The Left burns with it. The FBI Came Close to Staging a Coup. Andrew McCabe, a senior bureau official, provided the alarming evidence in a “60 Minutes” interview, writes John Kiriakou. 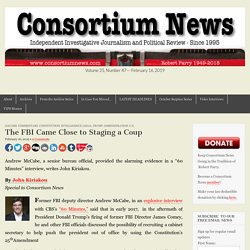 By John KiriakouSpecial to Consortium News Former FBI deputy director Andrew McCabe, in an explosive interview with CBS’s “60 Minutes,” said that in early 2017, in the aftermath of President Donald Trump’s firing of former FBI Director James Comey, he and other FBI officials discussed the possibility of recruiting a cabinet secretary to help push the president out of office by using the Constitution’s 25thAmendment McCabe further contended that Deputy Attorney General Rod Rosenstein offered to wear a wire when he was around Trump in order to gather evidence against him. (Rosenstein McCabe, left, on “60 Minutes.”