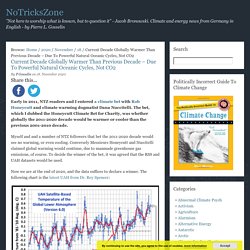 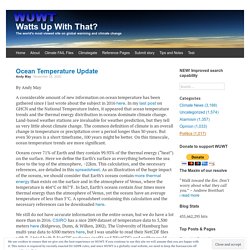 But even 30 years is a short timeframe, 100 years might be better. Oceans cover 71% of Earth and they contain 99.93% of the thermal energy (“heat”) on the surface. We still do not have accurate information on the entire ocean, but we do have a lot more than in 2016. Figure 1. The temperature drops to a minimum of 1°C at ~4,250 meters and then begins to increase. Arctic Ocean changes driven by sub-Arctic seas. New research explores how lower-latitude oceans drive complex changes in the Arctic Ocean, pushing the region into a new reality distinct from the 20th-century norm. 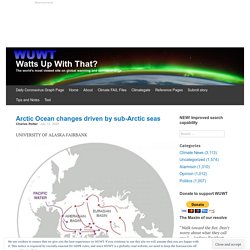 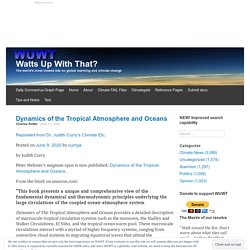 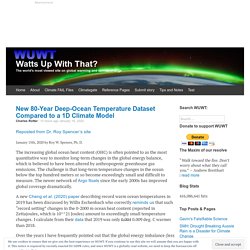 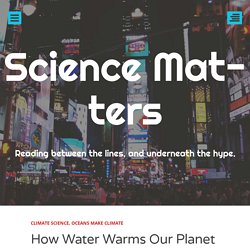 Estimates of the observed main water reservoirs (black numbers in 10^3 km3 ) and the flow of moisture through the system (red numbers, in 10^3 km3 yr À1 ). Adjusted from Trenberth et al. [2007a] for the period 2002-2008 as in Trenberth et al. [2011]. Evidence that Oceans not Man control CO2 emissions - New Climate Model. All the highest concentrations are downwind of warm water. 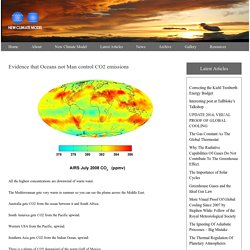 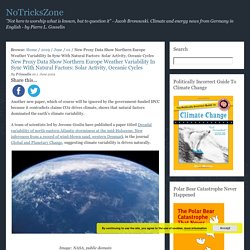 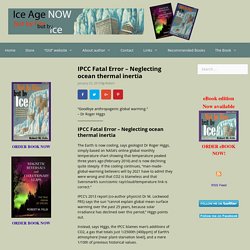 If the cooling continues, “man-made-global-warming believers will by 2021 have to admit they were wrong and that CO2 is blameless and that Svensmark’s sun/cosmic ray/cloud/temperature link is correct.” IPCC’s 2013 report (co-author physicist Dr M. Lockwood FRS) says the sun “cannot explain global mean surface warming over the past 25 years, because solar irradiance has declined over this period,” Higgs points out. Instead, says Higgs, the IPCC blames man’s additions of CO2, a gas that totals just 1/2500th [400ppm] of Earth’s atmosphere [near plant-starvation level], and a mere 1/10th of previous historical values. But that assumption is wrong. Climate change. New Paper Finds Oceans Are Source Of “Natural Variability”, Drive “Temperature Extreme Indices” By P Gosselin on 5. 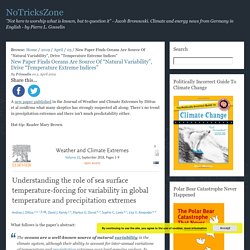 April 2019. New Study: The Tropical Atlantic Was 7.5°C Warmer Than Now While CO2 Was 220 ppm. By Kenneth Richard on 9. May 2019 Another new paper published in Paleoceanography and Paleoclimatology casts further doubt on the paradigm that says CO2 has historically been a temperature driver. The ‘Little Ice Age’ hundreds of years ago is STILL cooling the bottom of Pacific, researchers find. Science: The Deep Ocean Plays A ‘Leading Role’ In Global Warming. It’s Colder Now Than During The 1700s. Authors of a new paper published in the journal Science (Gebbie and Huybers, 2019) insist “the deep ocean ultimately plays a leading role in the planetary heat budget.”

The global deep ocean has much less heat today than it had during both the Medieval Warm Period and the Little Ice Age. Image Source: Gebbie and Huybers, 2019 A Bottom-Up Heat Flux? The deep ocean may warm hundreds (to thousands) of years before hemispheric surface temperatures and CO2 concentrations do (Stott et al., 2007). Image Source: Stott et al., 2007. Study reconstructing ocean warming finds ocean circulation changes may account for significant portion of sea level rise.

Study suggests that in the last 60 years up to half the observed warming and associated sea level rise in low- and mid- latitudes of the Atlantic Ocean is due to changes in ocean circulation. Over the past century, increased greenhouse gas emissions have given rise to an excess of energy in the Earth system. “Differences between ocean circulation and climate more generally” by Carl Wunsch 2010. Post July 25th, 2018 Talking about the difference between ocean circulation and climate more generally is per se a strong massage that there is a strong correlation.

Back in 1984 Carl Wunsch discussed the matter already lengthy in: ”The Global Climate”, ed. John T. Houghton, Cambridge p.189-203). He raises a number of topics, saying for example: “The role of the ocean in climate and climate change is unlikely to be demonstrated and understood until observations become meaningful in terms of physics being tested” (p.189); and “There is no substitute for adequate data”, (p.200). More recently Carl Wunsch published the paper “Towards Understanding the Paleocean” (Quaternary Science Review, 2010, p. 1960-1967). - The Washington Post. Reevaluating the Ocean Conveyer Belt. Earth’s polar regions communicate via oceanic ‘postcards,’ atmospheric ‘text messages’ Caption Freshly drilled segment of the WAIS Divide ice core is brought to the surface. Credit Tommy Cox Usage Restrictions None CORVALLIS, Ore. – Scientists have documented a two-part climatic connection between the North Atlantic Ocean and Antarctica, a fast atmospheric channel and a much slower oceanic one, that caused rapid changes in climate during the last ice age – and may again.

Recovering Whales, Ocean Acidification, and Climate Horror Stories. Detection and Attribution of Man-made Climate Change. Another New Paper Reveals No Discernible Human Influence On Global Ocean Temperatures, Climate. The Pause hangs on by its fingernails. Political science: a response to 375 concerned members of the National Academy of Sciences.