Using Milankovitch Cycles to create high-resolution astrochronologies. To quote (and H/T) Leif Svalgaard: This is an interesting application. 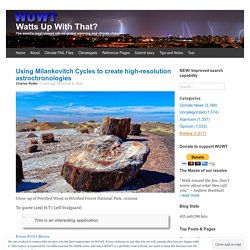 Younger Dryas Impact Hypothesis Takes Another Hit. Guest “whatever” by David Middleton Texas cave sediment upends meteorite explanation for global cooling7 hours agoBaylor UniversityTexas researchers from the University of Houston, Baylor University and Texas A&M University have discovered evidence for why the earth cooled dramatically 13,000 years ago, dropping temperatures by about 3 degrees Centigrade.The evidence is buried in a Central Texas cave, where horizons of sediment have preserved unique geochemical signatures from ancient volcanic eruptions—signatures previously mistaken for extraterrestrial impacts, researchers say.The resolution to this case of mistaken identity recently was reported in the journal Science Advances. 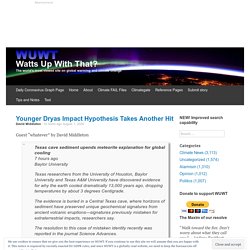 “This work shows that the geochemical signature associated with the cooling event is not unique but occurred four times between 9,000 and 15,000 years ago,” said Alan Brandon, Ph.D., professor of geosciences at University of Houston. Tying celestial mechanics to Earth’s ice ages. From Physics Today Gradual falls and sharp rises in temperature for millions of years have profoundly affected living conditions on the planet and, consequently, our own evolution. 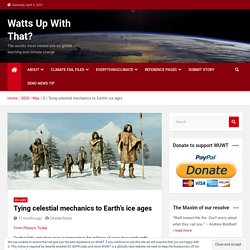 Mark Maslin is a professor of Earth system science in the department of geography at University College London. Climate Control or Climate Cycles? Published on July 8, 2019 Written by John Turner B.Sc. 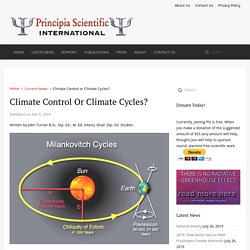 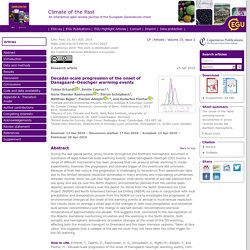 L., Cheng, H., Turney, C. S. M., Cooper, A., Svensson, A., Rasmussen, S. O., Fischer, H., and Muscheler, R.: Connecting the Greenland ice-core and U/Th timescales via cosmogenic radionuclides: testing the synchroneity of Dansgaard–Oeschger events, Clim. 2019 Update Scafetta vs. IPCC: Dueling Climate Theories. Sharpening a Cyclical Shovel. Guest Post by Willis Eschenbach There are a number of lovely folks in this world who know how to use a shovel, but who have never sharpened a shovel. 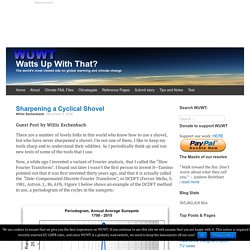 I’m not one of them. I like to keep my tools sharp and to understand their oddities. Statistical study of past temperature records suggest possible undetected natural climate forcing cycles. Godfrey Dack writes in with this: Everyone will be familiar with the difficulty of listening to a conversation held with a friend in a crowded room with many other conversations going on at the same time. 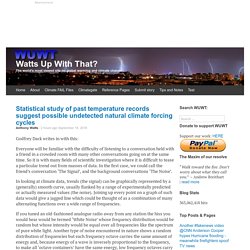 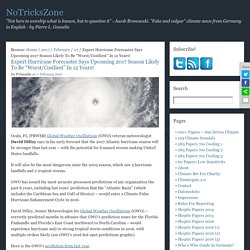 It will also be the most dangerous since the 2005 season, which saw 5 hurricane landfalls and 2 tropical storms. AMO: Atlantic Climate Pulse. I was inspired by David Dilley’s weather forecasting based upon Atlantic water pulsing into the Arctic Ocean (see post: Global Weather Oscillations). 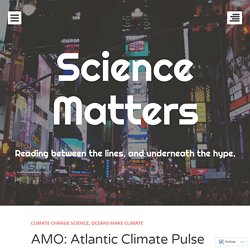 So I went looking for that signal in the AMO dataset, our best long-term measure of sea surface temperature variations in the North Atlantic. The Bray (Hallstatt) Cycle. By Andy May and Javier The evidence for a persistent irregular climate cycle with a period of 2400 ±200 years is strong. 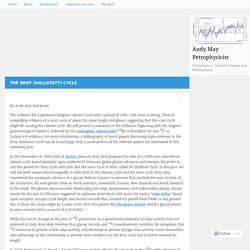 Solar variability and the Earth’s climate. By Andy May According to Javier and the IPCC total solar radiation output varies little, less than 0.1%. This is only 0.7 to 1.4 Watts/m2 and converted to incident radiation striking the Earth this reduces to about 0.05 to 0.4 W/m^2. 1,500-year cycle in the Arctic Oscillation identified in Holocene Arctic sea-ice drift : Nature Geoscience : Nature Research. Affiliations Department of Ocean, Earth, & Atmospheric Sciences, Old Dominion University, Norfolk, Virginia 23529, USA Dennis A. Darby & Chester E. Grosch Department of Geology, Kent State University, Kent, Ohio 44242, USA Joseph D. Ortiz Department of Earth Sciences, University of Southern California, Los Angeles, California 90089-0740, USA Steven P. Nature Unbound I: The Glacial Cycle. By Javier Insights into the debate on whether the Holocene will be long or short. Nature Unbound II: The Dansgaard- Oeschger Cycle. By Javier Dansgaard-Oeschger (D-O) events are the most dramatic and frequent abrupt climate change events in the geological record.

They are usually explained as the result of an Atlantic Ocean salinity oscillation paced by internal variability. Available evidence however supports that they are the result of an externally paced oceanic-sea ice interaction in the Norwegian Sea. Arctic Iris Effect Dansgaard Oeschger Events and Failed Climate Models. How Much Does the Arctic Iris Effect Explain Recent Warming, 1930s Warming and Dansgaard-Oeschger Events? The Arctic Iris Effect, Dansgaard-Oeschger Events, and Climate Model Shortcomings. Lesson from Climate Past – part 1. Guest essay by Jim Steele Director emeritus Sierra Nevada Field Campus, San Francisco State University and author of Landscapes & Cycles: An Environmentalist’s Journey to Climate Skepticism. The timing of interglacials. An alternate theory for the terrestrial ice-age trigger. The Intriguing Problem Of The Younger Dryas—What Does It Mean And What Caused It?