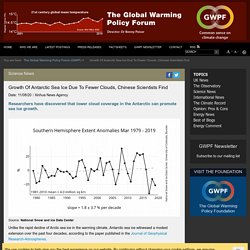 Unlike the rapid decline of Arctic sea ice in the warming climate, Antarctic sea ice witnessed a modest extension over the past four decades, according to the paper published in the Journal of Geophysical Research-Atmospheres. The researchers from China and the United States found that Antarctic sea ice had a strong rebound from 2011 to 2012. “We quantified the effects on sea ice growth via a thermodynamic model based on reanalysis and satellite data and concluded that lower cloud coverage cooled the sea surface and accelerated the sea ice storage,” said Wang Yunhe, a researcher from the Institute of Oceanology, Chinese Academy of Sciences.

“Clouds are like a down jacket for the Antarctic to preserve heat during winter,” said Bi Haibo, a researcher from the institute. 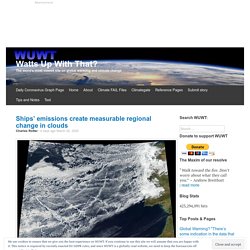 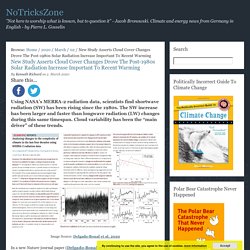 March 2020 Using NASA’s MERRA-2 radiation data, scientists find shortwave radiation (SW) has been rising since the 1980s. The SW increase has been larger and faster than longwave radiation (LW) changes during this same timespan. Cloud variability has been the “main driver” of these trends. Image Source: Delgado-Bonal et al, 2020 In a new Nature journal paper (Delgado-Bonal et al, 2020) published in Scientific Reports, scientists use radiation records from NASA to conclude shortwave (SW) changes are “mainly determined” by cloud modulation. Clouds are “showing a declining trend” from 1984-2014. Figures 1 (SW) and 2 (LW) suggest post-1980 radiative forcing trend lines reach ~3.5 W/m² (rising from approximately 103.5 to 107 W/m²) and slightly less than 1 W/m² (approximately 237.5 to 238.3 W/m²) for SW and LW, respectively.

Delgado-Bonal et al, 2020. Drying The Sky. Guest Post by Willis Eschenbach Eleven years ago I published a post here on Watts Up With That entitled “The Thermostat Hypothesis“. 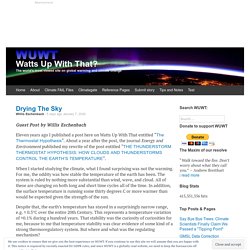 About a year after the post, the journal Energy and Environment published my rewrite of the post entitled “THE THUNDERSTORM THERMOSTAT HYPOTHESIS: HOW CLOUDS AND THUNDERSTORMS CONTROL THE EARTH’S TEMPERATURE“. When I started studying the climate, what I found surprising was not the warming. For me, the oddity was how stable the temperature of the earth has been. The system is ruled by nothing more substantial than wind, wave, and cloud. Despite that, the earth’s temperature has stayed in a surprisingly narrow range, e.g. ± 0.3°C over the entire 20th Century. The short version of my hypothesis is that a variety of emergent phenomena operate in an overlapping fashion to keep the earth’s temperature stable beyond expectations. Let me point out a few things about their most interesting study. Unfortunately, their study is model-based. Scientists: The Entirety Of The 1979-2017 Global Temperature Change Can Be Explained By Natural Forcing.

By Kenneth Richard on 28. 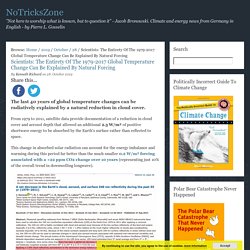 October 2019 The last 40 years of global temperature changes can be radiatively explained by a natural reduction in cloud cover. From 1979 to 2011, satellite data provide documentation of a reduction in cloud cover and aerosol depth that allowed an additional 2.3 W/m² of positive shortwave energy to be absorbed by the Earth’s surface rather than reflected to space. This change in absorbed solar radiation can account for the energy imbalance and warming during this period far better than the much smaller 0.2 W/m² forcing associated with a +22 ppm CO2 change over 10 years (representing just 10% of the overall trend in downwelling longwave). Image Source: Herman et al., 2013 Other satellite observations reveal a pronounced 6.8 W/m² positive solar forcing particularly concentrated during the 1984-2000 period due to a decrease in reflected shortwave energy (via clouds). 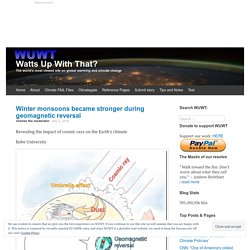 When galactic cosmic rays increased during the Earth’s last geomagnetic reversal transition 780,000 years ago, the umbrella effect of low-cloud cover led to high atmospheric pressure in Siberia, causing the East Asian winter monsoon to become stronger. This is evidence that galactic cosmic rays influence changes in the Earth’s climate. The findings were made by a research team led by Professor Masayuki Hyodo (Research Center for Inland Seas, Kobe University) and published on June 28 in the online edition of Scientific Reports. 2019 Evidence of Nature’s Sunscreen. Greenhouse with adjustable sun screens to control warming. 2019 Update Hard Evidence of Solar Impact upon Earth Cloudiness Later on is a reprinted discussion of global dimming and brightness resulting from fluctuating cloud cover. 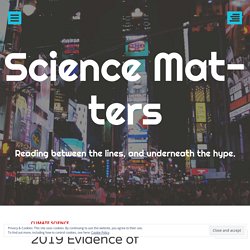 This is topical because of new empirical research findings coming out of Asia. H/T GWPF. More 2019 Evidence of Nature’s Sunscreen. Greenhouse with adjustable sun screens to control warming. 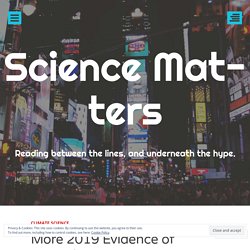 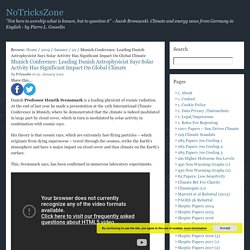 At the end of last year he made a presentation at the 12th International Climate Conference in Munich, where he demonstrated that the climate is indeed modulated in large part by cloud cover, which in turn is modulated by solar activity in combination with cosmic rays. His theory is that cosmic rays, which are extremely fast-flying particles – which originate from dying supernovae – travel through the cosmos, strike the Earth’s atmosphere and have a major impact on cloud cover and thus climate on the Earth’s surface. 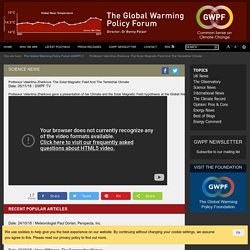 We don’t know clouds. Too many variables like clouds to model future climate with precision Guest essay by Rolf Westgard A new United Nations report suggests an imminent danger from global warming. It states that without drastic action we may have “to develop the ability to suck greenhouse gases out of the atmosphere and store them underground”. Minnesota already has millions of devices which do that. They are called trees and plants. It is actually not clear that our fossil fuel burning CO2 emissions are a serious global warming threat. Undeterred, federal and state legislatures are spending billions in response to guesses about our climate future. Old climate models do a bad job with clouds, so a new model says “warming must be worse” From the “it’s worse than we modeled department”, a case of “head in the clouds” thinking: This is the type of marine stratus clouds off the South American coast that was studied in the model simulations.

Credit: Image courtesy Cameron McNaughton From the University of Hawaii at Manoa via Eurekalert press release: Noctilucent clouds on the increase, climate change will likely be blamed. Of course, it might just be a negative feedback at work. From NASA: Appearance of Night-Shining Clouds Has Increased First spotted in 1885, silvery blue clouds sometimes hover in the night sky near the poles, appearing to give off their own glowing light. Known as noctilucent clouds, this phenomenon began to be sighted at lower and lower latitudes — between the 40th and 50th parallel — during the 20th century, causing scientists to wonder if the region these clouds inhabit had indeed changed — information that would tie in with understanding the weather and climate of all Earth.

Night-shining, or noctilucent clouds on July 3, 2011, in Lock Leven, Fife, Scotland. PODEX Experiment to reshape future of Atmospheric Science by getting a handle on aerosols and clouds. Polarimeter Definition Experiment (PODEX) in Southern California. The brightness, or “intensity,” and polarization of reflected light provide different information about the elements that make up a scene, apparent in this set of images collected by the Airborne Multiangle SpectroPolarimetric Imager (AirMSPI) during its maiden flight on Oct. 7, 2010, on the ER-2 over Palmdale, Calif.

AirMSPI is one of three prototype polarimeters being tested this month during PODEX. Credit: JPL/Caltech, AirMSPI Team› Read more. Solar Minimum Triggers Significant Rise In Cosmic Rays - The Global Warming Policy Forum (GWPF)The Global Warming Policy Forum. As 2018 comes to an end, Solar Minimum appears to be just getting started. Cosmic rays could continue to increase for years to come, so stay tuned.

So you thought Solar Minimum was boring? Think again. High-altitude balloon flights conducted by Spaceweather.com and Earth to Sky Calculus show that atmospheric radiation is intensifying from coast to coast over the USA–an ironic result of low solar activity. Nir Shaviv - The Cosmic Ray Climate Link. My crystal ball model says Noctilucent clouds, which we have almost no data on, must be man-made! Scientists wondered whether climate change was affecting super high clouds that people rarely see and there is virtually no data on.

So they used models which fail on clouds and water vapor only ten kilometers above the Earth and tried to predict what happened to both way up at 80 kilometers up and 150 years ago. They “found” (their phrase, not mine) the increase was man made. So once again, your car exhaust and dinner steak are to blame for changing these night-shining clouds. How could it be any other way? This is pure crystal ball science that starts with errors and ends with extrapolations. Data: Global Temperatures Rose As Cloud Cover Fell In the 1980s and 90s. Climatologist Dr. Roy Spencer has pointed out in his book, CERN’s CLOUD experiment results suggests industrial revolution reduced cloud cover, cosmic rays have an impact too. New peer reviewed paper: clouds have large negative cooling effect on Earth’s radiation budget.

The 2007-2008 Global Cooling Event: Evidence for Clouds as the Cause. Another unknown climate feedback – plankton blooms create brighter clouds. Salty sea spray affects the lifetimes of clouds, researchers find. Cloudy modeling problems: Today’s clouds might not be the same as pre-industrial ones. Spencer: Clouds Dominate CO2 as a Climate Driver Since 2000.