Go with your gut feeling. Master Shi Heng Yi – 5 hindrances to self-mastery. The Jewish philosopher Spinoza was one of the great Enlightenment thinkers. So why was he 'cancelled'? - ABC News. Be Outwardly Collectivist And Inwardly Individualist. Individualism could theoretically work as a political system, in a hypothetical world where nobody is ever helpless and the planet has infinite resources and the ecosystem is infinitely robust. 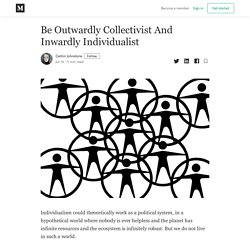 But we do not live in such a world. No, we live in a world where every single person is born helpless and somebody needs to take good care of them to help turn them into physically and psychologically healthy adults, where people get sick and become disabled, where most of us go through a prolonged period of steadily increasing weakness and convalescence before death. Why Everything Is Fucked. We all slid out of the womb an itty… That’s basically our whole entire situation in a nutshell. 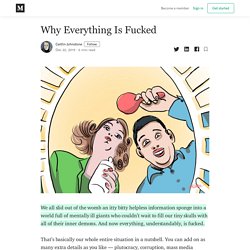 You can add on as many extra details as you like — plutocracy, corruption, mass media propaganda, billionaire wine cave fundraisers, whatever — but ultimately our plight is due to the fact that every single human showed up on this planet completely helpless and knowing nothing, forced to trust crazy giants to give them the grand introductory tour. Why were those giants crazy? Well you see, they got here the same way you did: small, slippery and completely clueless, surrounded by enormous gibbering lunatics who were all in a mad rush to teach them how to be insane. Influences on the 20th century. 10 rules to follow for discussions based on Pragma-Dialectical methods.

How to Begin Each Day: A Recipe for Unshakable Sanity and Inner Peace from Marcus Aurelius. “Take everything that’s bright and beautiful in you and introduce it to the shadow side of yourself,” the wise and wonderful Parker Palmer counseled the young in his superb Naropa Unviersity commencement address. 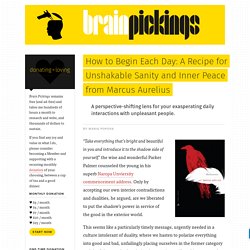 Cookies are Not Accepted - New York Times. Meditations - Wikipedia. Meditations (Medieval Greek: Τὰ εἰς ἑαυτόν Ta eis heauton, literally "[that which is] to himself") is a series of personal writings by Marcus Aurelius, Roman Emperor from 161 to 180 AD, recording his private notes to himself and ideas on Stoic philosophy. 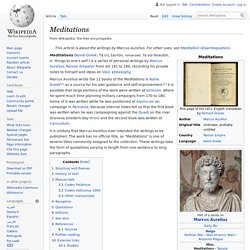 Marcus Aurelius wrote the 12 books of the Meditations in Koine Greek[1] as a source for his own guidance and self-improvement.[2] It is possible that large portions of the work were written at Sirmium, where he spent much time planning military campaigns from 170 to 180. Eudaimonia - Wikipedia. Discussion of the links between virtue of character (ethikē aretē) and happiness (eudaimonia) is one of the central concerns of ancient ethics, and a subject of much disagreement. 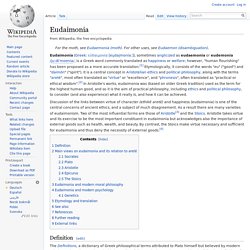 As a result there are many varieties of eudaimonism. Two of the most influential forms are those of Aristotle[3] and the Stoics. Aristotle takes virtue and its exercise to be the most important constituent in eudaimonia but acknowledges also the importance of external goods such as health, wealth, and beauty. By contrast, the Stoics make virtue necessary and sufficient for eudaimonia and thus deny the necessity of external goods.[4] Definition[edit] The good composed of all goods; an ability which suffices for living well; perfection in respect of virtue; resources sufficient for a living creature. 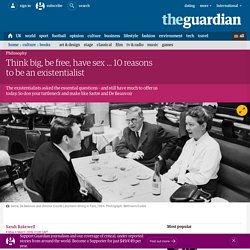 I became one at 16 after spending birthday money from my granny on Jean-Paul Sartre’s Nausea. About. The Internet Encyclopedia of Philosophy (IEP) (ISSN 2161-0002) was founded in 1995 as a non-profit organization to provide open access to detailed, scholarly information on key topics and philosophers in all areas of philosophy. Vedanta, Advaita. Advaita Vedānta is one version of Vedānta. 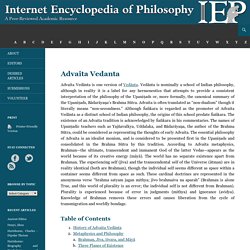 Vedānta is nominally a school of Indian philosophy, although in reality it is a label for any hermeneutics that attempts to provide a consistent interpretation of the philosophy of the Upaniṣads or, more formally, the canonical summary of the Upaniṣads, Bādarāyaņa’s Brahma Sūtra. Advaita is often translated as “non-dualism” though it literally means “non-secondness.”

11 Quotes From Alan Watts That Will Change Your Life. Alan Watts is considered as the foremost interpreter of Eastern disciplines for the contemporary West. 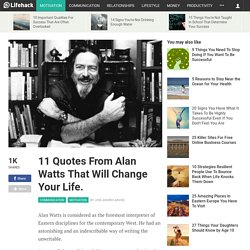 He had an astonishing and an indescribable way of writing the unwritable. Among all the qualities of this great orator and writer, he had an unique gift of expressing complex thoughts in the form of simple and illustrated thoughts. “The Tao of Philosophy 1 - Slices of Wisdom” by Alan Watts (Complete Lecture and Transcript)  Curator’s Note Part 1 of the Tao of Philosophy series is mostly comprised of shorter pieces taken from Alan Watts’ lectures. 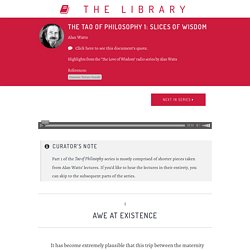 If you’d like to hear the lectures in their entirety, you can skip to the subsequent parts of the series. It has become extremely plausible that this trip between the maternity ward and the crematorium is what there is to life. And we still have going into our common sense the 19th-century myth which succeeded the Ceramic Myth in Western history—I call it the myth of the fully automatic model. PHILOSOPHY POSTERS by Max Temkin. Philosophy is the study of general and fundamental problems, such as those connected with existence, knowledge, values, reason, mind, and language. 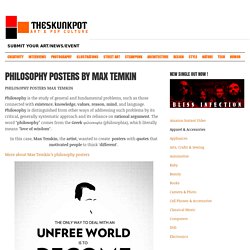 Philosophy is distinguished from other ways of addressing such problems by its critical, generally systematic approach and its reliance on rational argument. The word “philosophy” comes from the Greek φιλοσοφία (philosophia), which literally means “love of wisdom“. In this case, Max Temkin, the artist, wanted to create posters with quotes that motivated people to think ‘different‘.

More about Max Temkin’s philosophy posters Also check out AMAZING SLEEPING BABIES PHOTOGRAPHY and MAPPING STEREOTYPES. Hobson's choice. A Hobson's choice is a free choice in which only one thing is offered. Because a person may refuse to accept what is offered, the two options are taking it or taking nothing.

In other words, one may "take it or leave it". The phrase is said to have originated with Thomas Hobson (1544–1631), a livery stable owner in Cambridge, England, who offered customers the choice of either taking the horse in his stall nearest to the door or taking none at all. Origins[edit] Viktor E. Frankl Quotes (Author of Man's Search for Meaning) “The pessimist resembles a man who observes with fear and sadness that his wall calendar, from which he daily tears a sheet, grows thinner with each passing day.

On the other hand, the person who attacks the problems of life actively is like a man who removes each successive leaf from his calendar and files it neatly and carefully away with its predecessors, after first having jotted down a few diary notes on the back. He can reflect with pride and joy on all the richness set down in these notes, on all the life he has already lived to the fullest. What will it matter to him if he notices that he is growing old? Has he any reason to envy the young people whom he sees, or wax nostalgic over his own lost youth? What reasons has he to envy a young person? 48 Hours of Joseph Campbell Lectures Free Online: The Power of Myth & Storytelling. Photo by "Folkstory" features Joseph Campbell (left) with Jonathan Young, via Wikimedia Commons.

Time to rethink what makes humans special. Wait...Maybe the Hippies Weren't Right. Recently, a blog by Tam Hunt was published at Scientific American which provocatively declared that “The Hippies Were Right: It’s All About Vibrations, Man.” Hunt’s claim is that consciousness emerges from resonant effects found in nature at a wide range of scales.