Metallic Glass Gears Make for Graceful Robots. Throw a baseball, and you might say it's all in the wrist. 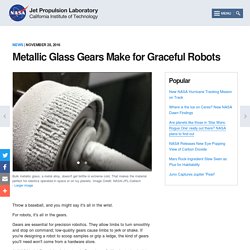 For robots, it's all in the gears. Gears are essential for precision robotics. They allow limbs to turn smoothly and stop on command; low-quality gears cause limbs to jerk or shake. If you're designing a robot to scoop samples or grip a ledge, the kind of gears you'll need won't come from a hardware store. At NASA's Jet Propulsion Laboratory in Pasadena, California, technologist Douglas Hofmann and his collaborators are building a better gear. "Although BMGs have been explored for a long time, understanding how to design and implement them into structural hardware has proven elusive," said Hofmann.

Recipe for the perfect gear How can this mystery material be both a metal and a glass? This produces a random arrangement of atoms with an amorphous, or non-crystalline microstructure. By virtue of being cooled so rapidly, the material is technically a glass. Metallic glass is the gear for robots. A team from NASA's Jet Propulsion Laboratory (JPL) in California is making gears out of bulk metallic glass (BMG), a specially crafted alloy with properties they say make it ideal for robotics. 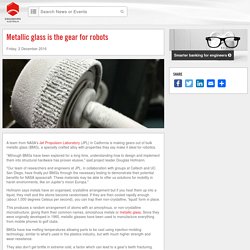 "Although BMGs have been explored for a long time, understanding how to design and implement them into structural hardware has proven elusive," said project leader Douglas Hofmann. "Our team of researchers and engineers at JPL, in collaboration with groups at Caltech and UC San Diego, have finally put BMGs through the necessary testing to demonstrate their potential benefits for NASA spacecraft.

These materials may be able to offer us solutions for mobility in harsh environments, like on Jupiter's moon Europa. " Hofmann says metals have an organised, crystalline arrangement but if you heat them up into a liquid, they melt and the atoms become randomised. Backpropagation. The project describes teaching process of multi-layer neural network employing backpropagation algorithm. 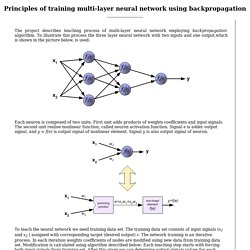 To illustrate this process the three layer neural network with two inputs and one output,which is shown in the picture below, is used: Each neuron is composed of two units. First unit adds products of weights coefficients and input signals. The second unit realise nonlinear function, called neuron activation function. Code a Colony. Diamond Cubic Truss. Gilman's Tetrahedral Truss / Lorimerlite Framework ​​This project began as an exploration into the self-organising principles of soap bubble clusters, which are known to exhibit observables rules (Plateau's Laws) ensuring that cumulatively each bubble encloses the maximum volume of space with the least possible surface area of partitions. 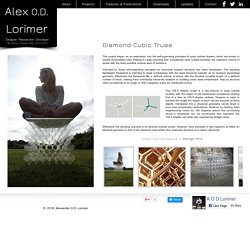 The Singularity : Bryan Appleyard : 9781845409074. Landscape - Wikipedia. There are two main meanings for the word landscape: it can refer to the visible features of an area of land, the landforms and how they integrate with natural or man-made features or to an example of the genre of Landscape painting that depicts such views of an area of land.[1] Large fields of modern farmland, Dorset, England A Landscape, in both senses, includes the physical elements of geophysically defined landforms such as (ice-capped) mountains, hills, water bodies such as rivers, lakes, ponds and the sea, living elements of land cover including indigenous vegetation, human elements including different forms of land use, buildings and structures, and transitory elements such as lighting and weather conditions. 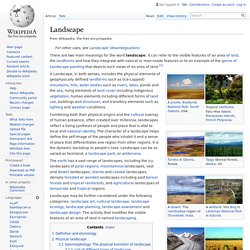 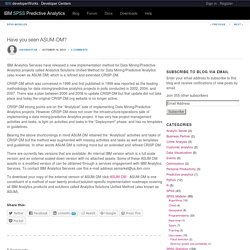 CRISP-DM which was conceived in 1996 and first published in 1999 was reported as the leading methodology for data mining/predictive analytics projects in polls conducted in 2002, 2004, and 2007. There was a plan between 2006 and 2008 to update CRISP-DM but that update did not take place and today the original CRISP-DM.org website is no longer active. SEMMA - Wikipedia. SEMMA is an acronym that stands for Sample, Explore, Modify, Model, and Assess. 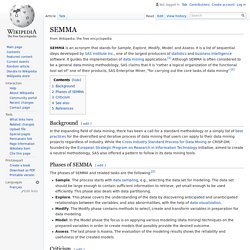 It is a list of sequential steps developed by SAS Institute Inc., one of the largest producers of statistics and business intelligence software. It guides the implementation of data mining applications.[1] Although SEMMA is often considered to be a general data mining methodology, SAS claims that it is "rather a logical organization of the functional tool set of" one of their products, SAS Enterprise Miner, "for carrying out the core tasks of data mining".[2] Background[edit] 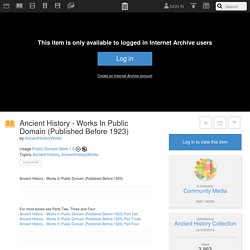 The Roman history: with notes historical, geographical, and critical; and illustrated with copper plates, maps, and a great number of authentick medals. Done into English, from the original French of the Revd Fathers Catrou and Rouille. AncientHistory-WorksInPublicDomainPublishedBefore1923PartThree directory listing. AncientHistory-WorksInPublicDomainPublishedBefore1923PartFour directory listing. Empirical Probability Formula. Empirical Probability Formula. Core Electronics. Open source math and numerical computing tools. After 'WW3' The World Is Going To Be Much Better Place According To The Greatest Prophets! Whether or not you believe in the power of the human mind to connect with The Source and withdraw information about the future, things are lining up in such a way that many prophecies start to seem like perfect descriptions for the world today.

In order to get the clearest possible picture of what could happen, we gathered all of the reported predictions from people, civilizations and mystics we could find. What do our natural laws really say about the world? Vito Elefante/Getty By Simon Ings JUST how much does the world follow laws? 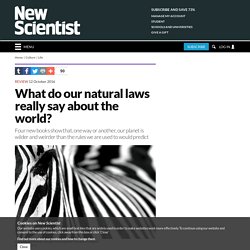 The human mind, it seems, may not be the ideal toolkit with which to craft an answer. To understand the world at all, we have to predict likely events and so we have a lot invested in spotting rules, even when they are not really there. Using Docker to run Node.js on a Raspberry Pi. Calculus - Wikipedia. People ate each other in this cave - and we still don’t know why. Of all the taboos humans hold onto, cannibalism is by far the most significant. 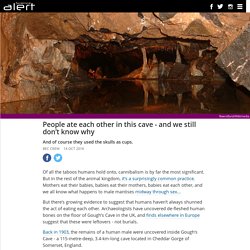 But in the rest of the animal kingdom, it’s a surprisingly common practice. Mothers eat their babies, babies eat their mothers, babies eat each other, and we all know what happens to male mantises midway through sex... But there’s growing evidence to suggest that humans haven’t always shunned the act of eating each other. H. L. Mencken - Wikipedia. Henry Louis Mencken (September 12, 1880 – January 29, 1956) was an American journalist, satirist, cultural critic and scholar of American English.[1] Known as the "Sage of Baltimore", he is regarded as one of the most influential American writers and prose stylists of the first half of the twentieth century. He commented widely on the social scene, literature, music, prominent politicians and contemporary movements. His satirical reporting on the Scopes trial, which he dubbed the "Monkey Trial", also gained him attention. As a scholar, Mencken is known for The American Language, a multi-volume study of how the English language is spoken in the United States.

Mencken opposed American entry into World War I and World War II. Mencken's longtime home in the Union Square neighborhood of West Baltimore was turned into a city museum, the H. Early life[edit] Mencken was born in Baltimore, Maryland, on September 12, 1880. Amazon. Don't look now, but Malcolm Turnbull just crashed the economy - Crikey. Consciousness could be a side effect of 'entropy', say researchers. It's impressive enough that our human brains are made up of the same 'star stuff' that forms the Universe, but new research suggests that this might not be the only thing the two have in common.

You can’t see it, you can’t touch it, and despite the best efforts of certain researchers, you can’t quantify it. And in science, if you can’t measure something, you’re going to have a tough time explaining it. Life's subatomic secret: How we're cracking the Hoyle state. Mark Stevenson/Stocktrek Images/Getty. Christopher Tolkien - Wikipedia. Christopher John Reuel Tolkien (born 21 November 1924) is the third son of the author J. Peter Deunov - Wikipedia. Peter Deunov /ˈdʌnɒv/ (Bulgarian: Петър Дънов, IPA: ['pɛtər 'dɤnоf]; July 11, 1864 – December 27, 1944), also known by his spiritual name Beinsa Douno (Bulgarian: Беинса Дуно, [bɛinˈsа duˈnɔ]), and often called the Master by his followers, was a Bulgarian philosopher and spiritual teacher who developed a form of Esoteric Christianity.

There’s A Secret Government Pyramid In North Dakota and No One Knows Its REAL Purpose! [IMAGES] The mysterious looking structure is part of the Stanley R. Mickelsen Safeguard Complex in Cavalier County, North Dakota and a military building that few ever see. After Reading This, You Won’t Masturbate The Same Way Ever Again. Sexual energy is the energy of life itself. It is the source of all creation and the essence of the universe. Scientists have figured out how to help nerve fibres repair themselves. Scientists have figured out how to make nerve fibres repair themselves in mice, having identified a gene that inhibits fibre regrowth when nerve connections become damaged. This gene, called Cacna2d2, acts as 'molecular brake', but now that we know how to turn the brake off, it could help us to develop treatments for conditions like paralysis and other spinal cord injuries. Duane Hamacher's articles on arXiv.

The world's oldest observatory? How Aboriginal astronomy provides clues to ancient life. Updated An ancient Aboriginal site at a secret location in the Victorian bush could be the oldest astronomical observatory in the world, pre-dating Stonehenge and even the Great Pyramids of Giza. Physicists just discovered electrons behaving like light in graphene... but better. 1,000 True Fans. Scientists just broke a fusion world record - and it lifts the bar for clean energy potential.

Alec Jeffreys - Wikipedia. Bookdepository. Hubble detects giant 'cannonballs' shooting from star. Library of Alexandria - Wikipedia. An ancient Greek algorithm could reveal all-new prime numbers. Why the Human Lifespan Ends at 122. This massive black hole just broke free, and is tearing through its own galaxy. Banks make millions in delaying interest rate cuts. 2 trees that were 'extinct' for half a century have been discovered in the Queen's garden.