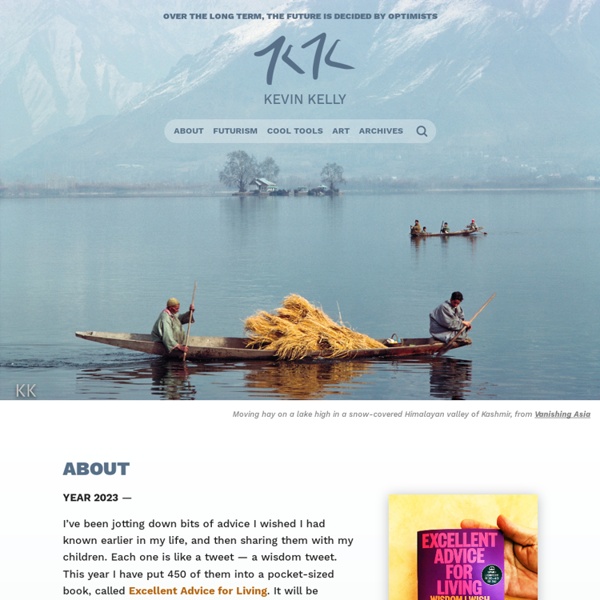 How climate change is behind this week's extreme cold snap Baby, it's frigid outside. A large swath of Canada, from the Prairies to Nova Scotia, is under a deep freeze. Temperatures in Winnipeg are dipping down to –36 C Monday night with a windchill of almost –50 C. In Windsor, which is typically the warmest spot in Ontario, the overnight temperature will dip to –27 C with a windchill of –40 C. Even in parts of the U.S.

Urban Omnibus New York City’s coastal communities and maritime environments are the subject of a lot of renewed attention in the wake of Hurricane Sandy. Practical urban strategy debates of whether to retreat or rebuild do not deal with speculative questions about how the new normal of stronger storms and seasonal inundation might actually suggest new forms of city life. This past semester, in a landscape architecture studio at Harvard’s Graduate School of Design, Chris Reed (working with David Mah, Leire Asensio Villoria, Silvia Benedito, Zaneta Hong, Eduardo Rico, and Enriquetta Llabras) charged his students with exactly this kind of speculation, introducing questions of urbanism and citymaking into the core sequence of studio work for landscape architects. The studio site was Jamaica Bay, an ecologically rich habitat containing many marshy islands, surrounded by highly developed residential and industrial areas including JFK airport, Floyd Bennett Field, and neighborhoods like Marine Park.

Telemetry Applications SCADA system users demand highly reliable communications equipment, and Kantronics delivers. Reliability starts at the factory with thorough product testing before the equipment goes out the door, resulting in a low 0.003% warranty return rate. Our quality firmware follows up with error detection to ensure that data reception errors don't make it through to your system.

Concrete: the most destructive material on Earth In the time it takes you to read this sentence, the global building industry will have poured more than 19,000 bathtubs of concrete. By the time you are halfway through this article, the volume would fill the Albert Hall and spill out into Hyde Park. In a day it would be almost the size of China’s Three Gorges Dam. In a single year, there is enough to patio over every hill, dale, nook and cranny in England. Buoyant Ecologies Float Lab The Buoyant Ecologies Float Lab is a prototype for a new kind of resilient coastal architecture. It merges expertise from design, advanced composites manufacturing, and marine ecology to imagine a floating architecture of the future that can exist productively with its surrounding environment. The project has developed through a multi-year partnership between academia and industry that serves as a model for expanding architectural agency beyond architecture’s traditional disciplinary limits. The project consists of a floating breakwater structure that incorporates a digitally fabricated, ecologically optimized fiber-reinforced polymer composite substrate.

Using the Sure Electronics GPS evaluation board for NTP Although this page is about using a particular board to provide GPS and PPS information over a 9-pin RS-232 connector, I've also used other boards intended for small PCs such as the Arduino, BeagleBone and Raspberry Pi - the Adafruit Ultimate GPS Breakout - 66 channel board is such a device. These typically have a 3.3V signal output which may not be enough to drive a typical serial port, as that level doesn't meet the RS-232 specification. In that case you can use a level converter such as and power it off the same 5V source as the GPS - perhaps from a USB port using just the ground and +5V leads. The basic steps are: From MIT Press: 10 Topics Every 21st Century Citizen Should Know About “That’s it: I need to know what I need to know!” I exclaimed recently when I heard about the “Essential Knowledge” series published by MIT Press. Know what I mean? The 21st century’s constant rapid change — particularly in technology — can engender a festering fear of missing out, the sense that everyone else is riding some trending wave while you’re standing with your back to it not even aware it’s there. And call me naive but there's no arbiter of need-to-know modern knowledge I'd rather consult than the bastion of brilliance that is MIT.

New Galerie Steel, plywood, perforated aluminum, acrylic sheets, vinyl welding screen, vinyl- and urethane-coated laminate flooring, vinyl strip doors with mounting hardware, LEDs, motion-sensitive computer system, hardware, polyurethane foam inserts, hot-rolled steel panels with patina, protective wax, urethane resin, dye, amphibian props used in the film Magnolia (1999) Installation view at “Dreamlands: Immersive Cinema and Art, 1905–2016”, Whitney Museum of American Art, New York Collection of the artist; courtesy New Galerie, Paris Produced with support from Pomeranz Collection, Vienna New quantum receiver the first to detect entire radio frequency spectrum A new quantum sensor can analyze the full spectrum of radio frequency and real-world signals, unleashing new potentials for soldier communications, spectrum awareness and electronic warfare. Army researchers built the quantum sensor, which can sample the radio-frequency spectrum—from zero frequency up to 20 GHz—and detect AM and FM radio, Bluetooth, Wi-Fi and other communication signals. The Rydberg sensor uses laser beams to create highly-excited Rydberg atoms directly above a microwave circuit, to boost and hone in on the portion of the spectrum being measured. The Rydberg atoms are sensitive to the circuit's voltage, enabling the device to be used as a sensitive probe for the wide range of signals in the RF spectrum. "All previous demonstrations of Rydberg atomic sensors have only been able to sense small and specific regions of the RF spectrum, but our sensor now operates continuously over a wide frequency range for the first time," said Dr. Kevin Cox, a researcher at the U.S.

iNFORMATiON FARM: Inside The LC: The Strange but Mostly True Story of Laurel Canyon and the Birth of the Hippie Generation Part 1 “There’s something happening here What it is ain’t exactly clear” Join me now, if you have the time, as we take a stroll down memory lane to a time nearly four-and-a-half decades ago - a time when America last had uniformed ground troops fighting a sustained and bloody battle to impose, uhmm, 'democracy' on a sovereign nation. It is the first week of August, 1964, and U.S. warships under the command of U.S. The Commons as a Tool for Sharing the Wealth - Commons Strategies David Bollier I recently spoke at a conference, “Property and Inequality in the 21st Century,” hosted by The Common Core of European Private Law, an annual gathering of legal scholars, mostly from Europe. They had asked me how the commons might be a force for reducing inequality. Below are my remarks, “The Commons as a Tool for Sharing the Wealth.” The conference was held at the University of Göteborg, Sweden, on June 12-13, 2015. Thank you for inviting me to speak today about the relationship between property law and inequality – a topic that receives far too little attention.

Petra Blaisse - Inside Outside Petra Blaisse Petra Blaisse started her career in 1978 at the Stedelijk Museum in Amsterdam, in the Department of Applied Arts. 1986 onwards, she worked as freelance exhibition designer and won distinction for her installations of architectural works. Gradually her focus shifted to the use of textiles, light and finishes in interior space and, at the same time, to the design of gardens and landscapes. In 1991, she founded Inside Outside. The studio worked in a multitude of creative areas, including textile, landscape and exhibition design.

M2 Driven Element Rehab Features and Benefits of this Project Soldered copper constructionAll soldered parts mechanically engagedUltra violet resistant Teflon insulators on DEN connector cannot be torqued looseImproved waterproofing Rebuilding the Driven Elements on 432 M2 Yagis After having a pair of 13 WL M2 432 MHz Yagis in the air for about ten years, I noticed that the return loss had degraded to 6 dB (about 3:1 VSWR) at the feed end of 120 feet of 7/8 inch foam coax.