Deane Ogden - I was asked by a Rebel Creative with Deane... Make $100K A Year With Sync Licensing. Your first step towards a new job in game audio. Team Building in an Indie World - Designing Music NOW. What is the fastest way to become a better composer? 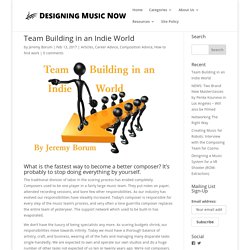 It’s probably to stop doing everything by yourself. The traditional division of labor in the scoring process has eroded completely. Composers used to be one player in a fairly large music team. They put notes on paper, attended recording sessions, and bore few other responsibilities. As our industry has evolved our responsibilities have steadily increased. We don’t have the luxury of being specialists any more. Lower budgets and package deals naturally give us fewer incentives to hire help.

Guerrilla Film Scoring is now the norm. Be Business-Minded Core music team for the Dreamworks film Need For Speed (some people missing) If you want music to be your business, you should treat it like a business. A small business owner has a better plan for future growth. Although it may feel like you need to work alone, it’s often possible to build a team. How did you get the music for your game? : gamedev. Internships. What We Learned Investigating Unpaid Internships by Blair Hickman ProPublica, July 23, 2014, 9 a.m. 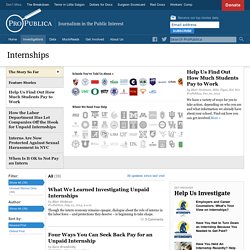 Though the intern economy remains opaque, dialogue about the role of interns in the labor force – and protections they deserve – is beginning to take shape. Four Ways You Can Seek Back Pay for an Unpaid Internship by Kara Brandeisky ProPublica, May 9, 2014, Noon Think you’re entitled to be paid for your unpaid internship? Have You Interned in Arts or Entertainment? By Blair Hickman ProPublica, April 14, 2014, 1:53 p.m. Help us understand what it’s like to intern in an industry that often doesn’t pay. The Department of Labor’s Internships Investigations by Kara Brandeisky, Eric Sagara and Jeremy B. In 2010, the Labor Department issued a new fact sheet clarifying when an intern needs to be paid under federal labor law.

How the Labor Department Has Let Companies Off the Hook for Unpaid Internships by Kara Brandeisky and Jeremy B. Labor Department Intervenes on Behalf of Hearst Interns. Forbes Welcome. Game Audio Guide: How to write a (game-changing) audio design document today: Some years ago, veteran sound designer and game audio director Zachary Quarles (DOOM, Quake, Killer Instinct, Wolfenstein & many more) wrote an excellent guide on how to do an audio design document – and this is his followup to that guide; one that may very well change your life game for the better! 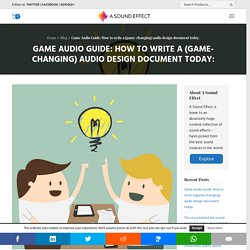 Here’s Zachary Quarles, with his insights on what you need to consider when doing an audio design document today – and why it’s such an essential tool for making your game sound its best: Several years ago, I wrote this blog post over on my webpage. It essentially broke down how important establishing an audio vision is when an audio director starts their project and what high-level topics should be addressed when writing the primary audio design document that should become your roadmap when going into pre-production and subsequently building your game.

It’s a fairly long read but it’s pretty fancy. It has bullet points, people…BULLET POINTS. Well, quite a bit of time has passed. Again. 1. 2.

Getting Your First Gig 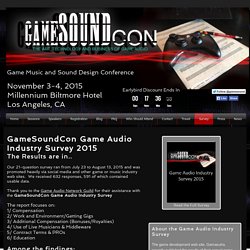 This year, the results were somewhat puzzling, with “audio” salaries coming in higher than every other discipline except “business and management.” Part of the reason for this unexpected result is that audio, more than most other game disciplines, has a very high percentage of non-salaried freelancers, which are unaccounted for in the Gamautra survey. Gamasutra also commented on the “smaller pool of respondents,” (33 "audio professionals" completed the survey) causing the results to be “more easily skewed.” With that in mind, we created a survey that attempted to more accurately capture the issues of contracts, terms and compensation in game audio.

Our goals were to have a survey that: • Reflected the freelancer segment of our industry • We agressively promoted to increse response rate.