Swoon in Studio : A Warm Welcome on a Cold Night. Posted on January 10, 2011 A visit to Swoon’s studio is a full immersion into her passions; meditations on humanity, the process of collaboration, and sculptures you can inhabit. 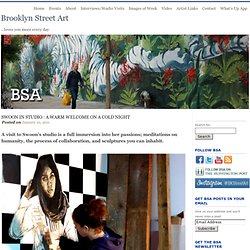 Swoon adding color to the busy streets of “Cairo” (Sunday Afternoon) (photo © Jaime Rojo) In the rustic warm light of a triple height cavernous space that might have served as a town hall a score of printed artworks on paper lay scattered across the wooden floor. Tiptoeing between the images to cross the formerly grand chamber, the familiar faces of children and adults who you’ve met on walls across the city look up at you. Together these figures, a de facto retrospective of Swoons’ last few years on the street in NYC, are burned into the retina of many a Street Art fan, and yet they lay here on this whitewashed wood-slatted floor without any ceremony at all. Photo © Jaime Rojo. Anastasia Ovchinnikova: concept artist. Forms in Nature. Forms in Nature The Light sculpture Forms in Nature resembles Darwinist Ernst Haeckel’s drawings . 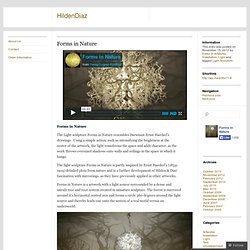 Using a simple action, such as intensifying the brightness at the center of the artwork, the light transforms the space and adds character, as the work throws oversized shadows onto walls and ceilings in the space in which it hangs. The light sculpture Forms in Nature is partly inspired by Ernst Haeckel’s (1834- 1919) detailed plots from nature and is a further development of Hilden & Diaz’ fascination with mirrorings, as they have previously applied in other artworks. HildenDiaz. Viewed from outside, the work is a great circle located in the ceiling from which white light is spreading in to the room. 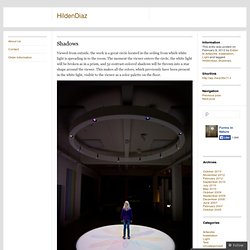 The moment the viewer enters the circle, the white light will be broken as in a prism, and 52 contrast-colored shadows will be thrown into a star shape around the viewer. This makes all the colors, which previously have been present in the white light, visible to the viewer as a color palette on the floor. Jen Stark. Catherine Nelson - visual artist. Catherine Anne Hiley. Photographer Erik Johansson. Illustration and Comics. Rebeccaariel. Eran alboher design & animation. Character Design Illustrations Backgrounds and concept Animation Showreel Info Following (0) Character Design Illustrations Backgrounds and concept Animation Showreel. 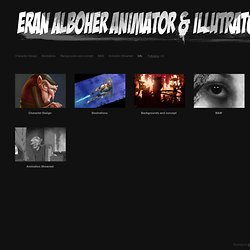 Brittney Lee. Recycled Art: 66 Masterpieces Made From Junks. Ever shocked by the beauty of toilet paper rolls, or saw the chicken formed by the egg shells, or witnessed coolest lion made by tires? 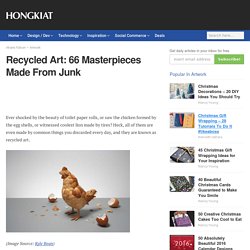 Heck, all of them are even made by common things you discarded every day, and they are known as recycled art. (Image Source: Kyle Bean) Recycled art is not something that’s beautiful but just a waste of time and space. It’s like alchemy which turns base metal into gold, except that it turns trashes into gold. Take recycled Optimus Prime with 2.5 meters tall as example, it was sold with 7800 U.S. dollars, sounds like a good price for a combination of metals which were originally treated as trashes. Are they really that beautiful and worth the purchase? Atelier Hapax Workshop Hapax excels in creating gorgeous and unique products by using discarded materials provided by their clients. Jeu Dechecs. BRC Designs Binary Low Table.

Korobeiniki Chair. Protrusion Low Table. Early Movie Concept Art: See What Your Favorite Characters Could’ve Looked Like. Just as with scripts, movie concept artists go through many a draft until they get the final approval for their character portrayals. 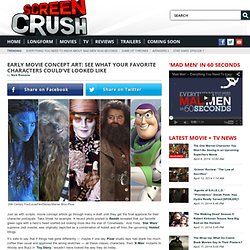 Take Shrek for example. A recent photo posted to Reddit revealed that our favorite green ogre with a hero’s heart started out looking more like the star of ‘Coneheads.’ And Yoda, ‘Star Wars” supreme Jedi master, was originally depicted as a combination of hobbit and elf from the upcoming ‘Hobbit‘ trilogy. Nina Levy: Sculpture and Photographs. Pablo Stanley. Dirty Car Art by Scott Wade. These incredible artworks belong to Scott Wade, a man who once again proves anything can be a diamond in the rough, even a dirty car window. 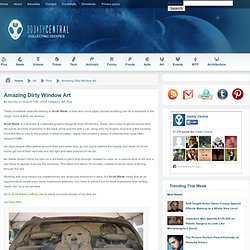 Scott Wade is a talented is a talented graphic designer, from Wimberley, Texas, who loves to get his hands dirty. He paints all kinds of pictures in the back of his and his wife’s car, using only his fingers, dust and a few brushes. From the Mona Lisa to the portrait of Albert Einstein, Wade has created a series of artworks that have often stopped traffic. He says people often gather around their cars when they go out, just to admire the beauty and detail of his art. Some get out of their vehicles at a red light and take pictures of his car. Mr. Working with dust means his masterpieces are destroyed whenever it rains, but Scott Wade views that as an opportunity to create even more impressive artworks. Go to Scott Wade’s official site to check out more photos of his dirty art. via Daily Mail. Great Illustrations by Jason Levesque. Jason Levesque, known better by the online moniker “Stuntkid”, is a self taught artist living in Norfolk, VA. 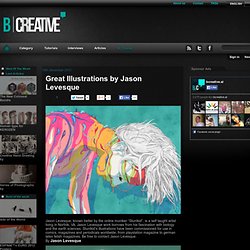 Jason Levesque work borrows from his fascination with biology and the earth sciences. Stuntkid’s illustrations have been commissioned for use in comics, magazines and periodicals worldwide, from playstation magazine to german latex fetish magazines. Be free to contact Jason Levesque. Marcin Karolewski on Behance. MichaelO - Digital Artist. Relentlessly Cheerful Art by James Hance. Luhring Augustine.