CIA file on Russian ESP experiments released – but you knew that, didn't you? Russian opposition leader, Alexey Navalny, spoofs call to his FSB assassin and he confesses. This is astounding. 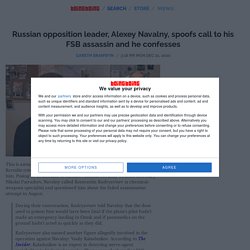 Alexey Navalny, the Russian opposition leader who the Kremlin tried to poison, spoofed a call to the agent who attempted to kill him. Posing as an assistant to Russian National Security Council Secretary Nikolai Patrushev, Navalny called Konstantin Kudryavtsev (a chemical-weapons specialist) and questioned him about the failed assassination attempt in August. The Story of a Hack. — from BillMoyers.com Four days ago, on December 13, Reuters broke the story that computer hackers had breached US government agencies, including the Treasury Department and the Commerce Department. 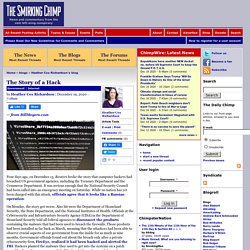 It was serious enough that the National Security Council had been called into an emergency meeting on Saturday. Alexey Navalny: CNN-Bellingcat investigation identifies Russian specialists who trailed Putin's nemesis. Trailing her to Domodedovo airport that morning was a member of an elite unit of the Russian Security Service, the FSB. 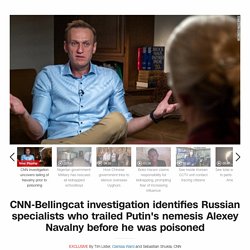 Oleg Tayakin, a slim, balding man with blue-green eyes, remained at the airport until Pevchikh left. Pevchikh was traveling in advance of a visit to Siberia by Russian opposition leader Alexey Navalny, whose anti-corruption campaign she leads. The Navalny team is constantly watched by the FSB in Russia, the successor to the Soviet Union's secret police force, the KGB. But Tayakin is no ordinary agent. How Russian hackers infiltrated the US government for months without being spotted. Thousands of companies and governments are racing to discover whether they have been hit by the Russian hackers who reportedly infiltrated several US government agencies. 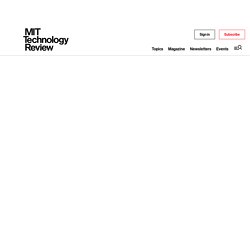 The initial breach, reported on December 13, included the Treasury as well as the Departments of Commerce and Homeland Security. But the stealthy techniques the hackers used mean it could take months to identify all their victims and remove whatever spyware they installed. To carry out the breach, the hackers first broke into the systems of SolarWinds, an American software company. There, they inserted a back door into Orion, one of the company’s products, which organizations use to see and manage vast internal networks of computers.

For several weeks beginning in March, any client that updated to the latest version of Orion—digitally signed by SolarWinds, and therefore seemingly legitimate—unwittingly downloaded the compromised software, giving the hackers a way into their systems. Russian bounties were the subject of police raids six months ago, as more details continue to emerge. As The New York Times reports, one of the raids that happened at the end of 2019 involved Rahmatullah Azizi, a man who started as a drug smuggler, then skimmed money as a U.S. contractor in Afghanistan, before becoming a conduit between Russia and the Taliban. 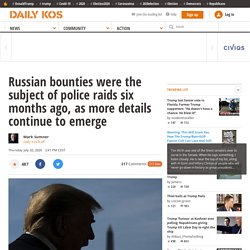 Azizi was able to evade those raids—though he left behind half a million in cash—and is suspected to be in hiding. In Russia. What does Putin have on Trump? Recently, Republicans and Democrats on the U.S. 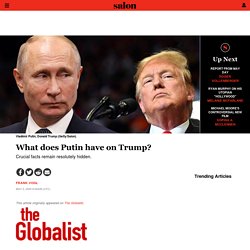 Senate Intelligence Committee unanimously approved a report totally supporting the findings by U.S. intelligence agencies that there was widespread Russian interference in the 2016 U.S. presidential election. The Deadly Losharik Submarine Fire and Russia's Secret Undersea Agenda. With all that naval power, the quickest way for Russia to surprise the United States would be to steam from the Arctic to the North Atlantic, said Heather A. 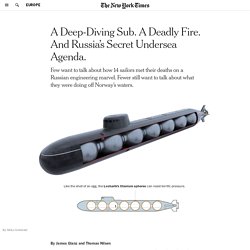 Conley, senior vice president for Europe, Eurasia, and the Arctic at the Center for Strategic and International Studies. “It’s really becoming a much more dynamic area,” Ms. Conley said. Russians Among Us by Gordon Corera review – spies in plain sight. In June 2010, Vladimir Putin’s spies broke into the Guardian’s Moscow office. 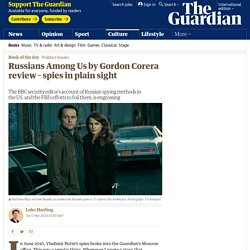 Here's how a Russian Sparrow conducts a Honey Pot spy mission - Americas Military Entertainment Brand. The world of espionage is a high-stakes chess game of clandestine operations where the end justifies the means. 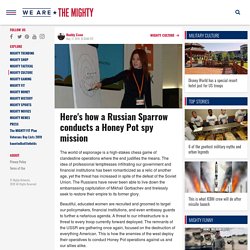 The idea of professional temptresses infiltrating our government and financial institutions has been romanticized as a relic of another age, yet the threat has increased in spite of the defeat of the Soviet Union. The Russians have never been able to live down the embarrassing capitulation of Mikhail Gorbachev and tirelessly seek to restore their empire to its former glory. Beautiful, educated women are recruited and groomed to target our policymakers, financial institutions, and even embassy guards to further a nefarious agenda. A threat to our infrastructure is a threat to every troop currently forward deployed. The remnants of the USSR are gathering once again, focused on the destruction of everything American.

10 Real Honeypot Operations That Played Out Like Spy Thrillers. The honeypot might be the most glamorized espionage technique in fiction. 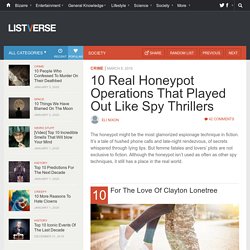 Butina worked as a pro-gun activist who infiltrated conservative political circles in the U.S. on behalf of the Kremlin around the 2016 election. The 30-year-old was convicted of conspiring to act as an unregistered foreign agent and was sentenced to 18 months in prison in April. She had already served nine months in a Virginia detention center following her July 2018 arrest. On Friday she’ll be released from Federal Correction Institute Tallahasee, a low security prison in Florida and will be escorted back to Moscow by two Immigration and Customs Enforcement agents, her lawyer Robert Driscoll said to the Washington Examiner. The Mystery of the Havana Syndrome. In the winter of 2017, the American Embassy in Havana was in a precarious state. The Embassy, a six-story tower that sits next to the seawall known as the Malecón, was built in 1953, and during the five decades in which diplomatic relations between Cuba and the United States were suspended it had suffered from neglect.

Salt and humidity from the ocean ate away at the pins holding up the marble façade. Work crews erected a fence around the most vulnerable area, to insure that no one was impaled by shards of marble tumbling from the walls. Audrey Lee, a career Foreign Service officer in her late forties, worked in a snug office on the ground floor. (The name is a pseudonym, which she requested in order to protect her privacy.) Russian witness thrown from a window after his name was exposed by Trump Tower lobbyist: emails. According to a report from the Daily Beast, a witness who was taking part in a U.S. trial aimed at Russian corruption — and who fell from a window to his death — reportedly had his name exposed in emails connected to alleged pro-Kremlin disinformation campaign operative Natalia Veselnitskaya. Emails uncovered by the Beast point the finger directly at Veselnitskaya, who met with Don Trump Jr. at Trump Tower in 2016 that became a major part of special counsel Robert Mueller’s report on Russian involvement in Donald Trump’s presidential campaign.

“New emails from the same cache, which includes messages from and to Veselnitskya and her aide and translator Murat Glashev, shed light on Veselnitskaya’s lobbying and legal campaign against the Magnitsky Act and appear to suggest that it may have been carried out in breach of another U.S. law and court orders,” the report continues. Russia carried out 'stunning' breach of FBI communications as U.S. neglected to appreciate espionage challenge - Attention to the Unseen. Yahoo News reports: American officials discovered that the Russians had dramatically improved their ability to decrypt certain types of secure communications and had successfully tracked devices used by elite FBI surveillance teams.

Officials also feared that the Russians may have devised other ways to monitor U.S. intelligence communications, including hacking into computers not connected to the internet. Exclusive: Russia carried out a 'stunning' breach of FBI communications system, escalating the spy game on U.S. soil. Auto High (HD) Medium. Go Inside Moscow’s Poisonous History of Covert Assassinations. In recent weeks, those close to Donald Trump have noticed him routinely asking media figures, longtime friends, and his political advisers a new, very leading question, often asked in the exact same way: “What the hell is going on at Fox? " According to three people who have independently spoken to Trump about Fox News over the past four weeks, the president has repeatedly asked that question. From Russia’s Secret Espionage Archives: The Art of the Dangle.

The Mueller Report’s Done, and Russians Are Pushing to Do Business With D.C. Maria Butina acted as an 'access agent' recruiting willing Republicans ... and she wasn't alone. Press descriptions of the actions of Butina, her Moscow-based controller Alexander Torshin, and the various U.S. Moscow Claims Whelan Had a Flash Drive Full of Secrets. When the KGB Wanted You Dead, This Is How They Killed You. Rabbit Hole: Moscow Has a Long History of Grabbing Americans for Trades. Secret Court Papers Hint Maria Butina May Testify in Another Trial.

Maria Butina’s ‘Red Sparrow’ Makeover Revealed on Russian TV. 'Trump doesn't know what to do' as Putin ignites a diplomatic crisis by holding American ‘hostage’: former CIA agent. New Studies Show Pundits Are Wrong About Russian Social-Media Involvement in US Politics. The release of two Senate-commissioned reports has sparked a new round of panic about Russia manipulating a vulnerable American public on social media. Headlines warn that Russian trolls have tried to suppress the African-American vote, promote Green Party candidate Jill Stein, recruit “assets,” and “sow discord” or “hack the 2016 election” via sex-toy ads and Pokémon Go. “The studies,” writes David Ignatius of The Washington Post, “describe a sophisticated, multilevel Russian effort to use every available tool of our open society to create resentment, mistrust and social disorder,” demonstrating that the Russians, “thanks to the Internet…seem to be perfecting these dark arts.” The Most Extraordinary Lesson of Two New Reports on Russian Disinformation: What They Reveal About White House Paralysis.

Soldiers carry the coffin of late Polish President Lech Kazcynski at a memorial service on April 18, 2010 in Krakow, Poland. Carsten Koall/Getty Images The crash of a Polish Air Force Tu-154 airliner near the Russian city of Smolensk on April 10, 2010 stands as the most momentous air disaster in modern times. Although other crashes have claimed more victims—the death toll at Smolensk came to 96, all those aboard the doomed ship plus seven crew—those lost were the elite of Poland’s government.

Among the dead were President Lech Kaczyński and his wife, much of the president’s staff, 18 parliamentarians, 10 generals and admirals representing Poland’s top military leadership, and many other political notables. Russian Troll Farm Hijacked American Teen Girls’ Computers for Likes. From Russia’s Secret Espionage Archives: The Art of the Dangle. Gizmodo. Salon. Former spy Sergei Skripal was poisoned by Russian nerve agent smeared on his car door, report says.

Russian spy attack: What are Novichok nerve agents and what do they do? UK Prime Minister Theresa May has told parliament that a military-grade nerve agent was used in an attack on former Russian double agent Sergei Skripal. The attack has left Skripal, 66, and his daughter Yulia, 33, in a critical but stable condition. Russia Demands Samples of Poison Used to Attack Spy in U.K. Ex-Spies on Sergei Skripal Assassination Attempt: ‘There Is Always a Danger’ Nastya Rybka: escort claims her tapes prove Russian interference in US election. Stop me if you’ve heard this one. Britain vows response if Russia is behind ex-spy’s collapse. Revealed: The Secret KGB Manual for Recruiting Spies. The KGB Playbook for Turning Russians Worldwide Into Agents. The KGB Playbook for Infiltrating the Middle East. The Kremlin’s Newest Hybrid Warfare Asset: Gangsters. How Russia Targets the U.S. Military. Russian Hackers May Have Affected 2016 Election Vote Totals.

Is There a Russian Mole Inside the NSA? The CIA? Both? Russia’s Spear Phishing Tactics in the 2016 Election Are Boring Compared to its 2008 Hack of the U.S. Military - Tech. Report: Russian Hackers ‘Shaking Down’ U.S. Liberals. How to Spin Russia’s War on [Western-backed] Terror? KGB Defector Yuri Bezmenov's Warning to America. Have Russian hitmen been killing with impunity in Turkey? How Moscow's Spies Keep Duping America—Over and Over Again. The Russian Biker Gang Part of the Trump Russia Story Is Here. SEXPIONAGE WHY WE CAN'T RESIST THOSE KGB SIRENS. Russian bots are starting to attack the Republican Party. FBI investigating shady Russian money transfers designated ‘to finance election campaign of 2016’: report.