Rights of the Children

An elementary school repeatedly dismissed allegations against its principal. Then, an FBI agent pretended to be a 13-year-old girl. BETHEL, Alaska — For some parents, it was the gifts from the principal to young girls and their families that gave them pause. 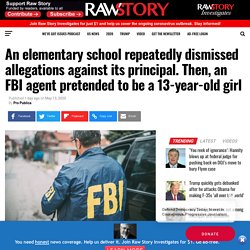 A few too many presents that cost a little too much money. Then began the late-night Facebook messages. Through most of it, the principal of one of the largest elementary schools in rural Alaska remained on the job and in close contact with students. Then, in December, Gladys Jung Elementary Principal Christopher Carmichael was arrested by the FBI’s Child Exploitation Task Force and later charged with possession of child pornography, attempted coercion of a child and sexual abuse of a minor. In a state with a history of failing to protect children, and in a region with a sexual assault rate more than six times the national average, parents of girls are asking the same question: How was this allowed to happen? Catholic Church Shields $2 Billion in Assets to Limit Abuse Payouts. For most of the 20th century, the Catholic Church in the U.S. minimized the damage wrought by pedophile priests by covering up the abuse. 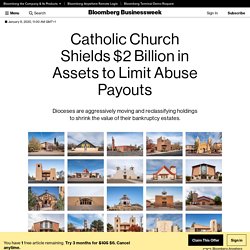 When the bishop of the Davenport, Iowa, diocese was told in the mid-1950s that one of his priests was sexually abusing boys at a local YMCA, he kept it secret. “It is consoling to know that no general notoriety has arisen, and I pray none may result,” he wrote to a priest, capturing the strategy of the era. Cover-ups worked when victims and their families could be intimidated or shamed into silence. But in the 1980s and ’90s, victims started filing civil lawsuits against the dioceses where the alleged incidents took place. Church leaders across the country kept these suits quiet by settling out of court and demanding nondisclosure agreements in return. I’m a 37-Year-Old Mom & I Spent Seven Days Online as an 11-Year-Old Girl. Here’s What I Learned. Epstein Victim Files New Lawsuit Against Estate, Claiming He Raped Her at Age 15. LOS ANGELES—Monday morning, attorney Gloria Allred announced a new civil lawsuit, alleging that the late billionaire pedophile Jeffrey Epstein had targeted yet another victim, identified only as Jane Doe 15, by inviting her to his New Mexico ranch, where he sexually assaulted her when she was just 15 years old. 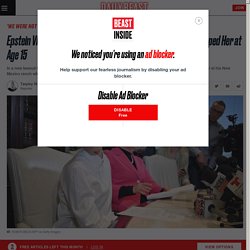 New Epstein suit alleges assault, trafficking at ranch. My Secret Life as an Underage Massage Therapist. In November 2018, a 66-year-old man named Tommy Thompson was wheeled into Judge Laurel Beatty Blunt’s courtroom in Columbus, Ohio, clad in a dark blue suit and looking like he had just served four years in federal prison. 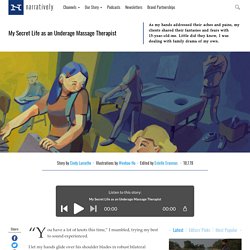 Thompson’s hair, once thick black curls, had given way to a bald pate, and with a long white beard and piercing eyes, he looked like a slightly hairier Christopher Lee, the actor who played the wizard Saruman in The Lord of the Rings. Throughout the trial, Judge Blunt interrupted Thompson’s testimony to reprimand him for veering wildly off course. Thompson had long insisted that he suffers from neurological problems and chronic fatigue syndrome, which impairs his memory, and that his meandering explanations were a symptom of the distress foisted upon him. But Judge Blunt, like other officials who’d presided over civil and criminal cases against Thompson, claimed that his malingering was the maneuvering of a hyper-intelligent con man. Appeals court moves toward unsealing in Jeffrey Epstein-related underage sex suit. A federal appeals court has moved to quickly unseal long-secret court filings related to financier Jeffrey Epstein’s sexual contact with underage girls, but one judge is expressing some disagreement with the plan. 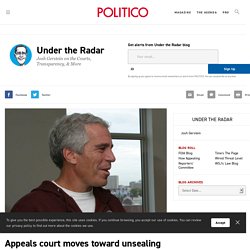 Two judges on a 2nd Circuit Court of Appeals panel considering motions to unseal records in an Epstein-connected lawsuit said in an order Monday that they plan to make public several key submissions in the case unless the parties make a compelling argument in the next eight days why the records shouldn’t be released. The order from Judges Jose Cabranes and Christopher Droney calls for unsealing a summary judgment motion that lawyers for Epstein friend Ghislaine Maxwell filed in a bid to knock down a lawsuit. 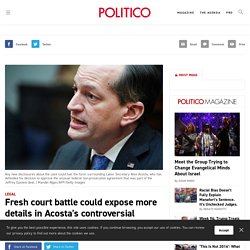 Sparks flew during arguments before the 2nd Circuit Court of Appeals in Manhattan as a lawyer for Virginia Roberts Giuffre, an Epstein accuser, repeatedly reiterated his client’s claim leveled several years ago that the Harvard law professor Alan Dershowitz not only defended Epstein but also had sex with some of the women Epstein victimized. Story Continued Below “It will demonstrate Epstein and Maxwell sexually trafficked her to Epstein’s friends, including Alan Dershowitz,” Cassell told the court.

“She wants all the documents unsealed substantively.” “Are you saying Mr. David Bowie and Rock ‘n’ Roll’s Statutory Rape Problem. Theslot.jezebel. Authorities had declined for years to prosecute teacher convicted of abuse. SANTA FE – It took a long time for former elementary teacher Gary Gregor to face prosecution for allegations that he had repeatedly molested young girls. 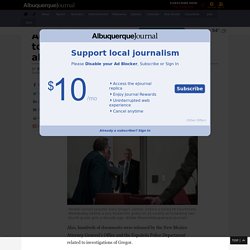 Last week, he was finally convicted on 12 counts of abusing two of his fourth-grade students at Española’s Fairview Elementary during the 2007-08 school year. Former school teacher Gary Gregor, center, enters a Santa Fe Courtroom Wednesday before a jury found him guilty on 12 counts of molesting two fourth-grade girls a decade ago. (Eddie Moore/Albuquerque Journal) Also, hundreds of documents were released by the New Mexico Attorney General’s Office and the Española Police Department related to investigations of Gregor. Take It from Someone Who Has Suffered Real Physical Abuse: Words Aren't Violence. Fear of serious injury cannot alone justify suppression of free speech and assembly. 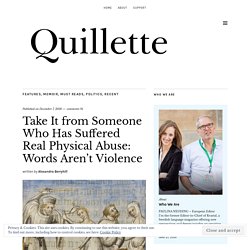 Men feared witches and burnt women. It is the function of speech to free men from the bondage of irrational fears. — U.S. Supreme Court Justice Louis Brandeis (1856-1941) For the fourth time in the space of 30 minutes, the sound of a cell-phone text alert interrupted my college class. - The Washington Post. Brainsturbator. Witness: Principal rejected account that ex-teacher molested her repeatedly. Copyright © 2018 Albuquerque Journal SANTA FE – Nallely Hernandez said she went to her principal to report that her teacher, Gary Gregor, was touching her inappropriately. 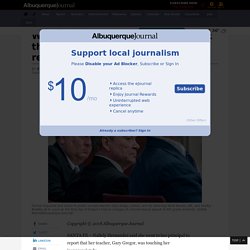 But instead of conducting an investigation or calling police, principal Ruby Montoya went to Hernandez’s fourth-grade class at Fairview Elementary in Española and told the students to stop spreading lies about Gregor. Hernandez, now 21, testified Tuesday at the first of a projected four trials for Gregor, 62, on charges of sexual crimes against young girls he was teaching in Santa Fe and Española.

He faces a total of 13 counts, including criminal sexual penetration of a minor, criminal sexual contact of a minor, and kidnapping with intent to commit a sexual offense, in the trial that began in Santa Fe District Court on Tuesday. The Journal typically doesn’t publish the names of alleged sexual assault victims, but Hernandez said she did not mind. How Incarcerated Parents Are Losing Their Children Forever. While punishing students who refuse to smile in hallways.

School punished black teen for fighting back against white student who sexually assaulted him: lawsuit. Deadspin. Dylan Farrow: Why has the #MeToo revolution spared Woody Allen? Editor’s Note: Woody Allen, who declined to comment prior to publication, has long denied the allegations described in this Op-Ed. 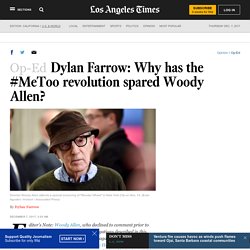 Dylan Farrow’s allegations against Allen were investigated by sex-abuse experts at Yale-New Haven Hospital and by law enforcement. A state’s attorney in Connecticut said he had “probable cause” to prosecute in 1993 but did not file charges. We are in the midst of a revolution. From allegations against studio heads and journalists, to hotel maids recounting abuses on the job, women are exposing the truth and men are losing their jobs. Investigation Uncovers 40 Years of Unreported Sexual Abuse at Prestigious Boarding School. ‘This was 30 minutes of hell for this young lady': Unaccompanied minor groped on flight. About 30 minutes into an American Airlines flight from Dallas to Portland, Ore., a flight attendant noticed Chad Cameron Camp, 26, with his hand on a 13-year-old girl's crotch, according to the complaint. When the plane landed Camp was arrested and charged with abusive sexual contact.

‘Most Beautiful Girl In The World’ Is Only Ten – And Already Dealing With Sexist Attacks (IMAGES) Why Can’t We Stop Child Abuse? Last June, a woman walking her dog on Deer Island, in Boston Harbor, came across a black plastic garbage bag on the beach. Inside was a very little girl, dead. The woman called for help and collapsed in tears. Police searched the island; divers searched the water; a medical examiner collected the body. The little girl had dark eyes and pale skin and long brown hair.