8 Common Online Trolling Tactics (And How to Handle Them) - North Cyber Research. "Blacks For Trump" Twitter Gets Outed As Fake Thanks To A Dumb Mistake. Facebook can't catch misinformation it's already identified as false, activist group says. But a new report from activist researchers shows that in the past year alone, Facebook has failed to act on hundreds of posts that racked up millions of impressions and contain claims that the social media giant has previously identified as false or misleading — raising fresh questions about the company's readiness for a potential wave of misinformation following Nov. 3. 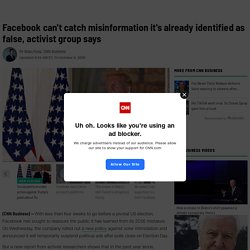 The report outlines how purveyors of misinformation have successfully evaded Facebook's content review systems — both human and automated — by taking simple steps such as reposting claims against different-colored backgrounds, changing fonts and re-cropping images. The resulting posts appear to be just different enough to have escaped enforcement. The posts include false claims about President Donald Trump and Vice President Joe Biden as well as false information about mail-in voting and the coronavirus. Infographic: Beyond Fake News – 10 Types of Misleading News – Seventeen Languages. The work needed to effectively filter information in our media-saturated environment takes time and skill. 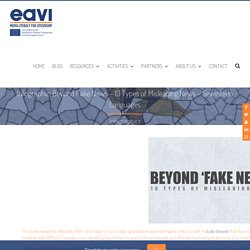 A study showed that the more content we consume, the more our ability to make decisions about its veracity becomes impaired. With 80% of Europeans now regularly going online, it is vital for the sustainable and effective functioning of democracy for citizens to be able to curate their media diets with a healthy critical eye. Our Beyond Fake News infographic identifies the 10 types of potentially misleading news. 15 Most Reliable News Sources.

Journalism, in essence, is the profession that deals with the gathering, production, and distribution of reports regarding recent political, social, criminal, and other societal/regional activities. 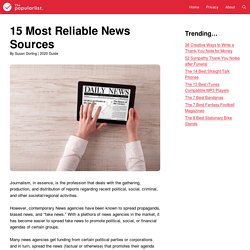 However, contemporary News agencies have been known to spread propaganda, biased news, and “fake news.” With a plethora of news agencies in the market, it has become easier to spread fake news to promote political, social, or financial agendas of certain groups. Many news agencies get funding from certain political parties or corporations and in turn, spread the news (factual or otherwise) that promotes their agenda and favors it.

Which News Sources Can Be Trusted? (Video) Click to Play. Which News Sources Can Be Trusted? The anatomy of a fake news headline. As confrontations between Black Lives Matter protesters and police erupted across the country earlier this month, some Oregonians, mostly older people, saw a Facebook ad pushing a headline about how a Republican politician “Wants Martial Law To Control The Obama-Soros Antifa Supersoldiers.” 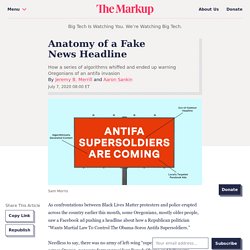 Needless to say, there was no army of left-wing “supersoldiers” marching across Oregon, nor were former president Barack Obama and billionaire George Soros known to be funding anything antifa-related. And the politician in question didn’t actually say there were “supersoldiers.” The headline, originally from the often-sarcastic, progressive blog Wonkette, was never meant to be taken as straight news.

Original story published by Wonkette with tongue-in-cheek headline. SmartNews ad on Facebook that presents the headline as fact. Trapped in a hoax: survivors of conspiracy theories speak out. Conspiracy theories used to be seen as bizarre expressions of harmless eccentrics. 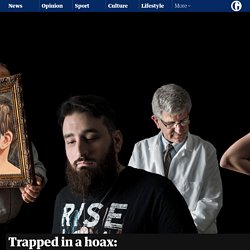 Not any more. Gone are the days of outlandish theories about Roswell’s UFOs, the “hoax” moon landings or grassy knolls. Instead, today’s iterations have morphed into political weapons. Turbocharged by social media, they spread with astonishing speed, using death threats as currency. Together with their first cousins, fake news, they are challenging society’s trust in facts. Their growing reach and scale is astonishing. If You Found That ‘Plandemic’ Video Convincing, Read This Too. There’s a video out there that claims to show a scientist being silenced by the government. 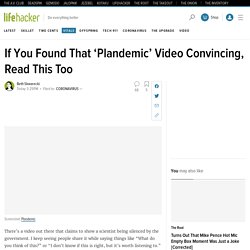 I keep seeing people share it while saying things like “What do you think of this?” Or “I don’t know if this is right, but it’s worth listening to.” If you want to learn more but are wary of being taken in by propaganda, I’ve written this for you. The video is “part one” of an upcoming movie called Plandemic, and consists of a single interview between the filmmaker and virologist Judy Mikovits. She says that the COVID-19 pandemic was somehow created in a lab or is being allowed to spread on purpose (her story shifts a bit). The larger truths. Untitled.

Untitled. The National Archives has issued an apology for digitally altering an image from the Women’s March in 2017 that blurred our images that were critical of Donald Trump. 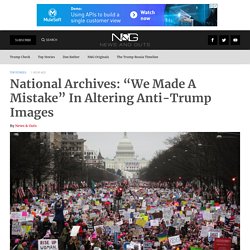 The New York Times writes: “We made a mistake,” began a statement the archives released on Saturday. “The photo of protesters holding signs was part of an exhibit, “Rightfully Hers: American Women and the Vote,” which examined the struggle of women to gain the right to vote. “But signs critical of the president that appeared in the photo — including one that said “God Hates Trump” — were doctored to blur out Mr. Trump’s name, according to The Washington Post, which first reported on the alterations. The National Archive calls itself this country’s record keeper.