Bill Maher and Megyn Kelly Argue White People Are Being Targeted. Here's A Supercut Of Leta Powell Drake, Who Loved To Be Hilariously Direct In Her Interviews With Celebrities. Floria Sigismondi and Dakota Johnson See Each Other' In the Darkness. Investigative reporter Seymour Hersh: The world is "run by ignoramuses, wackos and psychotics" Seymour Hersh is one of America's greatest investigative reporters. 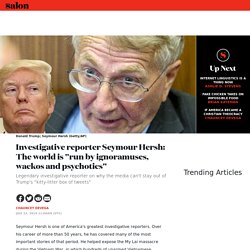 Over his career of more than 50 years, he has covered many of the most important stories of that period. He helped expose the My Lai massacre during the Vietnam War, in which hundreds of unarmed Vietnamese civilians were killed by American soldiers. Writing for the New York Times, he helped to bring more public attention to the Watergate cover-up. Hersh was also among the first reporters to offer a proper account of Richard Nixon's and America's "secret" war in Cambodia. 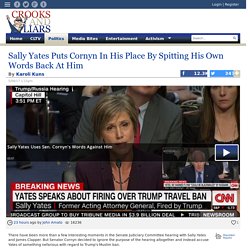 </a> There have been more than a few interesting moments in the Senate Judiciary Committee hearing with Sally Yates and James Clapper. Sally Yates just smacked the bullsh#t out of a Republican senator's mouth. Like virtually the entire Republican Party, it is almost impossible for Texas Senator John Cornyn to go an entire day without saying something mind-numbingly hypocritical. 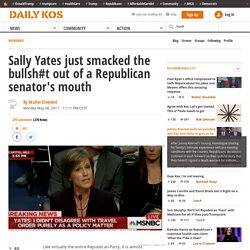 But on Monday, Cornyn was at the Senate Committee hearing speaking with former Acting U.S Attorney General Sally Yates, trying to get to the bottom of the national security issue that is the Trump White House. In Sen. Bill Maher goes off on ‘whiny little b*tch’ Donald Trump for not accepting responsibility like a ‘real man’ In his Friday episode of “Real Time,” host Bill Maher let loss when it comes to men like Bill O’Reilly and Donald Trump. 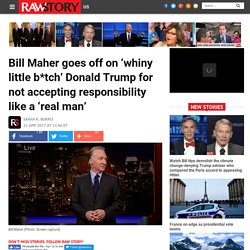 First, it was O’Reilly’s recent “settlement” at Fox News. Maher said that finally, a black woman came forward saying O’Reilly referred to her as “hot chocolate.” ‘Trump Is Just Tearing Off the Mask’: An Interview with Eric Foner. On July 20, 2016, the day after Donald Trump accepted the presidential nomination of the party whose origins Eric Foner chronicled in his first book, Free Soil, Free Labor, Free Men (1970), I met with the distinguished historian, professor, and longtime Nation board member in his office at Columbia University. 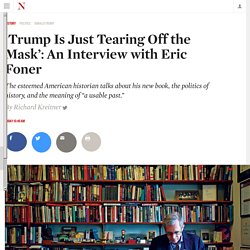 A longer version of this interview appears in Foner’s new book, Battles for Freedom: The Use and Abuse of American History, available here.1 The Nation: How did you come to be acquainted with The Nation? 2 Eric Foner: I grew up in a left-wing household, so The Nation and I.F. Stone’s Weekly came to our house. The Nation: One of the early pieces in your new collection of essays is a review, written with Jon Wiener, about the Smithsonian’s exhibit on American art and the West. WATCH: Legendary filmmaker John Waters: Mike Pence must be an “adult baby” Cult filmmaker and author John Waters has a new gift book called “Make Trouble,” based on a commencement speech he gave at the Rhode Island School of Design that went viral. 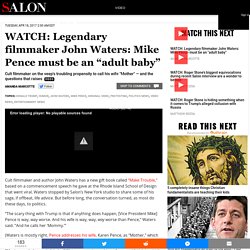 Waters stopped by Salon’s New York studio to share some of his sage, if offbeat, life advice. But before long, the conversation turned, as most do these days, to politics. “The scary thing with Trump is that if anything does happen, [Vice President Mike] Pence is way, way worse. And his wife is way, way, way worse than Pence,” Waters said. “And he calls her ‘Mommy.’” Henry Rollins: Fuck Mick Mulvaney, Scott Pruitt and the Whole Trump Administration. Thursday, March 30, 2017 at 4:15 a.m. 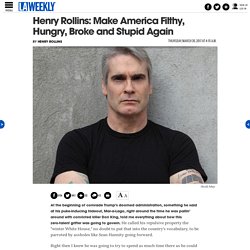 David Letterman on Donald Trump and Late-Night TV Today. Since retiring after 33 years on the late night television, David Letterman has kept a low public profile — aided by the growth of a truly impressive beard. 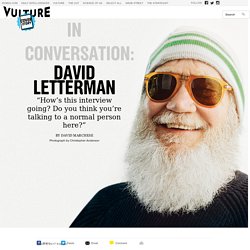 Robert Mitchum Dick Cavett 1971. ‘This scandal could bring down the administration’: Fox military analyst slams Trump’s Russia stonewalling. The Nature of Reality: A Dialogue Between a Buddhist Scholar (Alan Wallace) and a Theoretical Physicist (Sean Carroll) Please Subscribe to 3QD If you would like to make a one time donation in any amount, please do so by clicking the "Pay Now" button below. 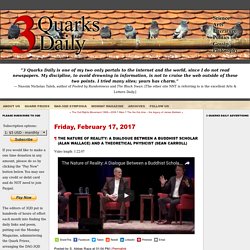 You may use any credit or debit card and do NOT need to join Paypal. The editors of 3QD put in hundreds of hours of effort each month into finding the daily links and poem, putting out the Monday Magazine, administering the Quark Prizes, arranging the DAG-3QD Peace and Justice Symposia, and doing the massive amount of behind-the-scenes work which goes into running the site. Sean Hannity Travels To London To Interview Julian Assange At Ecuadorian Embassy. <a class="icopyright-article-tools-noscript" href=" target="_blank" title="Main menu of all reuse options"><img height="25" width="27" border="0" align="bottom" alt="[Reuse options]" src=" Click here for reuse options! 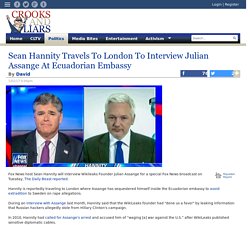 </a> Fox News host Sean Hannity will interview Wikileaks Founder Julian Assange for a special Fox News broadcast on Tuesday, The Daily Beast reported. Hannity is reportedly traveling to London where Assange has sequestered himself inside the Ecuadorian embassy to avoid extradition to Sweden on rape allegations. During an interview with Assange last month, Hannity said that the WikiLeaks founder had "done us a favor" by leaking information that Russian hackers allegedly stole from Hillary Clinton's campaign.

In 2010, Hannity had called for Assange's arrest and accused him of “waging [a] war against the U.S.” after WikiLeaks published sensitive diplomatic cables. The Pope of Trash Interviews the King of Body Horror. About a week ago the venerable Pope of Trash, John Waters, had a spectacular interview with the King of Body Horror, David Cronenberg. Fear on Film: 1982 Roundtable Discussion with John Landis, David Cronenberg, and John Carpenter. Janeane garofalo and sarah silverman talk about larry sanders show. David Lynch on Transcendental Meditation, ‘True Detective,’ and Collaborating With Kanye West. Four men in their mid-30s, a few more lines on their foreheads and circles under their eyes, return to make music.

Where did Ashley Parker Angel go? The last great boy band of the early 2000s, O-Town, is back with Lines and Circles. Hulet Radio Page. David Cronenberg: ‘My imagination is not a place of horror’ When the great Canadian film-maker David Cronenberg turned 70 last year he felt, in a word, old. An admirer of Franz Kafka, he said he found himself comparing himself to Gregor Samsa, the protagonist of The Metamorphosis, who wakes up one morning to find – very Cronenbergian – that he’s become a giant beetle. Terry Gilliam: Hollywood is just “gray, frightened people” holding on for dear life. If you want to illustrate the old adage about a prophet who is without honor in his own country, look to Terry Gilliam. Mind you, I guess America isn’t even Gilliam’s country anymore, and neither is Hollywood. The onetime Monty Python member and director of “Time Bandits,” “Brazil” and “12 Monkeys,” although he was born in Minneapolis and spent his teen years in Los Angeles, has lived as an expatriate for many years and renounced his United States citizenship in 2006.

(That was partly in protest of George W. Entheodelic Storytelling: A Conversation with Gabriel D. Roberts. Wallace Shawn – The Fever. Sid Caesar Double-Talk Routine. Dr. Rick Strassman Sheds Light on the Mysterious, Profound Paradox Hiding Within Us- DMT. Join Dr. Noam Chomsky answers the question you’ve always wanted to ask: ‘Have you ever been wrong?’ In an interview with Conor Gearty, the director of the Institute of Public Affairs at the London School of Economics, Noam Chomsky answered the one question that anyone who’s read him wants answered. 1980 Interview with Scatman Crothers About His Role in "The Shining" TAM2014 - Carol Tavris - Who's Lying Who's Self-Justifying. William Gibson interview: time travel, virtual reality, and his new book.

Buzz Aldrin: The Dark Side of the Moon. Legendary Cartoonist Robert Crumb on the Massacre in Paris. Robert Crumb is considered by many to be the single best cartoonist America has ever produced. The creator of counter culture icons like Fritz the Cat, the Keep On Truckin guy and Mr Natural, Mr. Harnessing the Limits of Human Possibility. Valerie Plame: Most female spies in pop culture are gun-wielding eye candy. Jon Stewart Tells Dana Perino That Fox's 'The Five' & 'The Daily Show' Would Make A 'Shit Taco' "The Daily Show" is not exactly known as friendly turf for Fox News hosts. The Hard Problem of Consciousness.

Why Jane Goodall Believes in Bigfoot. The Hunter S. Thompson Fireball Trick. Stanley Kubrick : The Lost Tapes (Full Documentary) Speaking with: Naomi Klein on capitalism and climate change. In her latest book, This Changes Everything (2014), the Canadian writer and activist Naomi Klein tackles the issue of climate change through a familiar prism: capitalism. She argues that unrestrained capitalism is the root of the problem and that the global response to climate change has, thus far, been shaped by wealth and power.