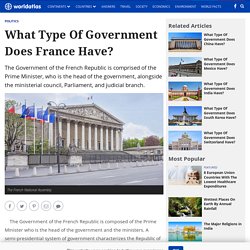 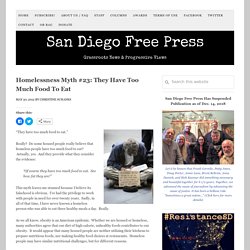 Really? Do some housed people really believe that homeless people have too much food to eat? Actually, yes. Engineers transform food waste into green energy. In a classic tale of turning trash into treasure, two different processes soon may be the favored dynamic duo to turn food waste into green energy, according to a new Cornell-led study in the journal Bioresource Technology. 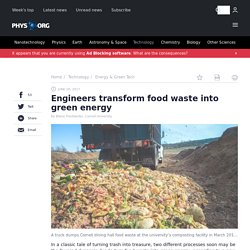 "Food waste should have a high value. We're treating it as a resource, and we're making marketable products out of it," said lead author Roy Posmanik, a postdoctoral researcher. "Food waste is still carbon – a lot of carbon. " The researchers show that by using hydrothermal liquefaction before anaerobic digestion, virtually all of the energy is extracted from the food waste. In hydrothermal liquefaction, the waste is basically pressure cooked to produce a crude bio-oil. Drinking alcohol on some Michigan rivers could cost you $5k or 5 years in prison. MICHIGAN (WPBN/WGTU) -- If you're caught drinking alcohol on three rivers within the Huron-Manistee National Forests, it could cost you. 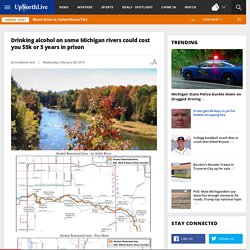 The National Forest Service announced Wednesday they will be prohibiting alcohol on the AuSable, Manistee and Pine rivers during the summer. Clean Water Space » Did you know…? Facts and figures about lakes. Less than two percent of the freshwater on our planet exists in a readily usable form for human uses. 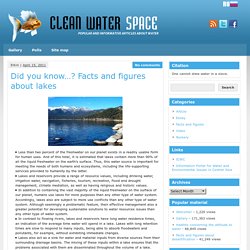 And of this total, it is estimated that lakes contain more than 90% of all the liquid freshwater on the earth’s surface. Thus, this water source is important for meeting the needs of both humans and ecosystems, including the life-supporting services provided to humanity by the latter.Lakes and reservoirs provide a range of resource values, including drinking water, irrigation water, navigation, fisheries, tourism, recreation, flood and drought management, climate mediation, as well as having religious and historic values.In addition to containing the vast majority of the liquid freshwater on the surface of our planet, humans use lakes for more purposes than any other type of water system.

Accordingly, lakes also are subject to more use conflicts than any other type of water system. Life of a strawberry - Stop food waste - save the food. YOUR BUSINESS IS FOOD: Don’t throw it away - foodservice. By Amanda Kane | 4 October 2017 Food waste costs the Australian economy dearly. 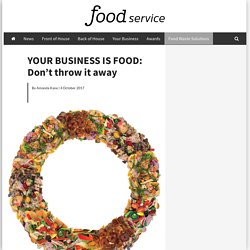 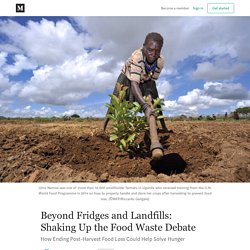 Its goal is to speed up progress in the fight to end hunger — and scaling advancements in food loss reduction is one of its many promising projects. The Zero Post-Harvest Losses project sells low-cost, locally produced grain silos to farmers and provides them with training on post-harvest crop management. Global Warming, You and I – "Ok, I get it.. how do I do my part?" Gazasia – Landfill sites. Landfill sites In South East Asia, as is the case throughout much of the world, significant tonnages of biodegradable waste are sent to landfill. 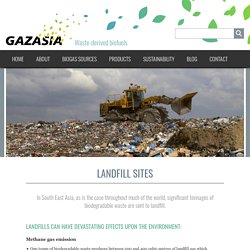 Food waste happy hour. Foodwaste article 1. The World Wastes Tons of Food. A Grocery ‘Happy Hour’ Is One Answer. HELSINKI, Finland — “Happy hour” at the S-market store in the working-class neighborhood of Vallila happens far from the liquor aisles and isn’t exactly convivial. 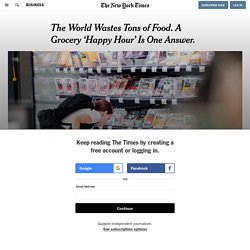 Nobody is here for drinks or a good time. They’re looking for a steep discount on a slab of pork. Or a chicken, or a salmon fillet, or any of a few hundred items that are hours from their midnight expiration date. Food that is nearly unsellable goes on sale at every one of S-market’s 900 stores in Finland, with prices that are already reduced by 30 percent slashed to 60 percent off at exactly 9 p.m. It’s part of a two-year campaign to reduce food waste that company executives in this famously bibulous country decided to call “happy hour” in the hopes of drawing in regulars, like any decent bar. “I’ve gotten quite hooked on this,” said Kasimir Karkkainen, 27, who works in a hardware store, as he browsed the meat section in the Vallila S-market. Total cost after the price drop: the equivalent of $4.63. SOFA 2019. Scroll down linkDOWNLOAD FULL REPORT. Climate, inequality, hunger: which global problems would you fix first? – interactive quiz. 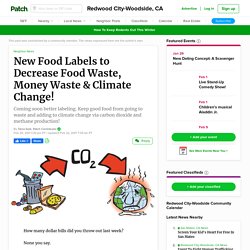 None you say. Wrong. The average family in the United States wastes twenty five percent of the food it buys. According to the National Resources Defense Council, the food Americans throw away every year is worth $218 billion. Food Security & Malnutrition – Understanding Climate Change. One of the most common concerns I hear my peers voice about climate change is their inability to make an impact. Climate change is an issue that doesn’t have borders; it affects everyone around the world, and negotiations concerning it take place at local, regional, national, and international levels. So what could anyone possibly do at an individual level that could be potent enough to actually have an effect on the climate? How Reducing Food Waste Could Ease Climate Change.

More than a third of all of the food that's produced on our planet never reaches a table. It's either spoiled in transit or thrown out by consumers in wealthier countries, who typically buy too much and toss the excess. This works out to roughly 1.3 billion tons of food, worth nearly $1 trillion at retail prices. Aside from the social, economic, and moral implications of that waste—in a world where an estimated 805 million people go to bed hungry each night—the environmental cost of producing all that food, for nothing, is staggering. [INTERVENTIONS] Stop the waste: UN food agencies call for action to reduce global hunger.

Pinpointing the problem “How can we allow food to be thrown away when more than 820 million people in the world continue to go hungry every day?” , asked FAO Director-General Qu Dongyu in the foreword to his agency’s report. [INTERVENTIONS] Can we feed the world and ensure no one goes hungry? Thanks to rapid economic growth, and increased agricultural productivity over the last two decades, the number of people in the world who aren’t getting enough to eat has dropped by almost a half, with regions such as Central and East Asia, Latin America and the Caribbean making great strides in eradicating extreme hunger. However, that’s against a background of the global population rising by nearly two billion. A World Food Programme food distribution point in Dhubab, Yemen. Brisbane joins Love Food Hate Waste movement. About Fight Food Waste. Costing the Earth. Tackling Australia’s food waste. Tackling Australia’s food waste. Aussie food waste bill over $10 billion in 2019.

Australian's spent over $10 billion dollars on food this year, which eventually ended up in garbage bins, up from nearly $9 billion dollars in 2018. Rabobank has released its 2019 food waste report, comparing states and generations as well as how Australia compares globally. Environment. Woolworths Archives - Waste Management Review. New targets within the 2025 plan have been outlined alongside the launch of the Australasian Recycling Label. The new targets aim to aim to increase the average recycled content within all packaging by 30 per cent and phase out problematic and unnecessary single-use plastic packaging through design, innovation or the introduction of alternatives. Food Waste: The Problem and the Solutions - Jake. 9-minute read•February 7th, 2019 Right at this moment, cockroaches are doing more to save the environment than you are. A big exaggeration?

Not if you’ve ever thrown away leftovers from your plate or bought more food than you could manage to cook in a week. SOFA 2019. Leading manufacturers, wholesalers and retailers make food waste into fertiliser. Leading manufacturers, wholesalers and retailers make food waste into fertiliser. Global agenda for reducing food waste. Love Food Hate Waste - Victoria interventions/solutions for food waste. Save money The average Victorian home is throwing away almost $42 per week and collectively, as a state, that adds up to $5.4 billion annually. $700 million of that is made up of just leftovers alone. Luckily, there are ways you can start to put this money back in your pocket. It starts with simple planning and continues through smart shopping and storage and some simple resourceful cooking.

Whilst you’re at it, you’ll likely find you save money on your grocery spend, and do your bit helping the planet. Food Waste Statistics 2019. Food waste: using sustainable innovation to cut down what we throw away. Our appetite for food is a serious problem. The huge amount of energy, land and water used to fill our supermarket shelves mean that modern overproduction and excessive consumerism are rapidly depleting resources and damaging the planet. More than £1bn of food wasted before reaching supermarkets – study. Food in the Anthropocene: the EAT–Lancet Commission on healthy diets from sustainable food systems. Food systems have the potential to nurture human health and support environmental sustainability, however our current trajectories threaten both. The EAT–Lancet Commission addresses the need to feed a growing global population a healthy diet while also defining sustainable food systems that will minimise damage to our planet.

The Commission quantitively describes a universal healthy reference diet, based on an increase in consumption of healthy foods (such as vegetables, fruits, whole grains, legumes, and nuts), and a decrease in consumption of unhealthy foods (such as red meat, sugar, and refined grains) that would provide major health benefits, and also increase the likelihood of attainment of the Sustainable Development Goals. This is set against the backdrop of defined scientific boundaries that would ensure a safe operating space within six Earth systems, towards sustaining a healthy planet.