Digital Divide. Youtube. The American Dream. Capitalism, Poverty, and Ratatouille. Martin Wolf: why rentier capitalism is damaging liberal democracy. “While each of our individual companies serves its own corporate purpose, we share a fundamental commitment to all of our stakeholders.” 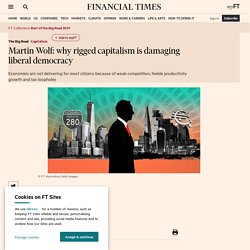 With this sentence, the US Business Roundtable, which represents the chief executives of 181 of the world’s largest companies, abandoned their longstanding view that “corporations exist principally to serve their shareholders”. This is certainly a moment. But what does — and should — that moment mean? The answer needs to start with acknowledgment of the fact that something has gone very wrong. Over the past four decades, and especially in the US, the most important country of all, we have observed an unholy trinity of slowing productivity growth, soaring inequality and huge financial shocks. As Jason Furman of Harvard University and Peter Orszag of Lazard Frères noted in a paper last year: “From 1948 to 1973, real median family income in the US rose 3 per cent annually.

So why is the economy not delivering? That does not explain every disappointment. If democratic socialism is so bad, why is Norway so great? The spectacular upset victory of Alexandria Ocasio-Cortez in her recent New York congressional primary election has catapulted the topic of democratic socialism to the top of America's political discussion. 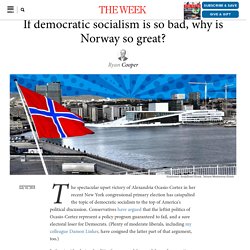 Conservatives have argued that the leftist politics of Ocasio-Cortez represent a policy program guaranteed to fail, and a sure electoral loser for Democrats. (Plenty of moderate liberals, including my colleague Damon Linker, have cosigned the latter part of that argument, too.) Let's set aside electoral politics for now and focus solely on democratic socialist policies. Helpfully, we have a country that very closely approximates the democratic socialist ideal. It's a place that is not only very far from a hellish dystopia, but also considerably more successful than the United States on virtually every social metric one can name.

I'm talking about Norway. On the policy side, American conservatives have one international example in their case against democratic socialism: Venezuela. Economicshelp. Are You Ready To Consider That Capitalism Is The Real Problem? This story reflects the views of this author, but not necessarily the editorial position of Fast Company. In February, college sophomore Trevor Hill stood up during a televised town hall meeting in New York and posed a simple question to Nancy Pelosi, the leader of the Democrats in the House of Representatives. He cited a study by Harvard University showing that 51% of Americans between the ages of 18 and 29 no longer support the system of capitalism, and asked whether the Democrats could embrace this fast-changing reality and stake out a clearer contrast to right-wing economics. Pelosi was visibly taken aback. “I thank you for your question,” she said, “but I’m sorry to say we’re capitalists, and that’s just the way it is.” The footage went viral.

It’s not only young voters who feel this way. Why do people feel this way? Because let’s be clear: That’s what capitalism is, at its root. Just look at the recent case involving American Airlines. It all proceeds from the same deep logic. Dr. Money vs Capital. Neoliberalism: the deep story that lies beneath Donald Trump’s triumph.

The events that led to Donald Trump’s election started in England in 1975. 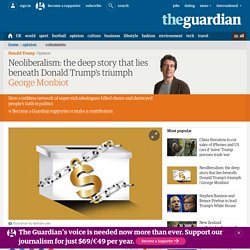 At a meeting a few months after Margaret Thatcher became leader of the Conservative party, one of her colleagues, or so the story goes, was explaining what he saw as the core beliefs of conservatism. She snapped open her handbag, pulled out a dog-eared book, and slammed it on the table. “This is what we believe,” she said. A political revolution that would sweep the world had begun. The book was The Constitution of Liberty by Frederick Hayek. This, at any rate, is how it was originally conceived. He begins the book by advancing the narrowest possible conception of liberty: an absence of coercion. Democracy, by contrast, “is not an ultimate or absolute value”. He justifies this position by creating a heroic narrative of extreme wealth. The ultra rich are “scouts”, “experimenting with new styles of living”, who blaze the trails that the rest of society will follow. Those who tell the stories run the world.