A Look at Geopolitics

'Violent Face-Off' in Ladakh: Army Confirms 20 Indian Soldiers Killed. New Delhi: The Indian Army has confirmed that the number of Indian soldiers killed in the “violent face-off” with Chinese troops in the Galwan Valley on Monday night is now 20. 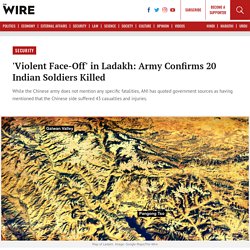 “Indian and Chinese troops have disengaged at the Galwan area where they had earlier clashed on the night of 15/16 June 2020. 17 Indian troops who were critically injured in the line of duty at the stand off location and exposed to sub-zero temperatures in the high altitude terrain have succumbed to their injuries, taking the total that were killed in action to 20,” the Army said in its official statement. “Indian Army is firmly committed to protect the territorial integrity and sovereignty of the nation,” it added. There is no official confirmation on the number of injuries on the Indian side. In a statement released on Tuesday afternoon, the Indian Army had revealed that three Indians – a colonel and two soldiers – were killed. Major Generals from both armies are reportedly in talks. Foreign powers test US defenses amid coronavirus pandemic. Russia Is Losing the Oil War Against Saudi Arabia—and the Middle East. For the past few years, the foreign-policy community has collectively come to believe that a new era in international politics is emerging. 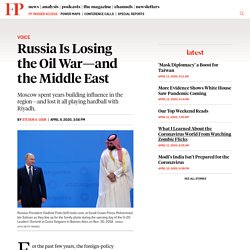 The defining features of this post-post-Cold War order are great-power competition and the realignment of America’s relationships around the world. Nowhere is this more apparent than the Middle East, where U.S. allies are developing diplomatic, commercial, and military relationships with the very powers with which Washington is supposed to be competing—China and Russia—and precisely at a time when so many U.S. experts, analysts, officials, and politicians are expressing a desire to retrench from the Middle East. China's Coronavirus Misinformation Campaign Seeks to Avoid Blame.

On March 22, Axios on HBO aired an interview it had conducted with Cui Tiankai, the Chinese ambassador to the United States, nearly a week earlier in which Cui reiterated his original Feb. 9 assertion that spreading coronavirus-related conspiracy theories would be “crazy” and “very harmful.” 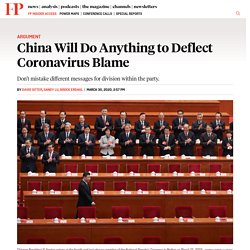 Cui was referring, albeit indirectly, to claims that the coronavirus that causes COVID-19 was developed in a military lab, perhaps in the United States, promoted by fellow Chinese officials. How WHO Became China's Accomplice in the Coronavirus Pandemic. While the novel coronavirus is changing the world, China is trying to do the same. 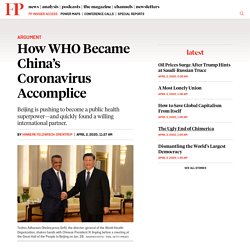 Already a serious strategic rival of the United States with considerable international clout, it’s now moving into a new field—health. After initial denials and cover-ups, China successfully contained the COVID-19 outbreak—but not before it had exported many cases to the rest of the world. Today, despite the falsehoods it initially passed on, which played a critical role in delaying global response, it’s trying to leverage its reputed success story into a stronger position on international health bodies. The Killing of Qassem Soleimani and Drone Proof Cities. By Leanne Ogasawara It was at the height of Obama’s massive acceleration of George W’s drone program, when city planner Asher J Kohn began imagining his drone-proof “Shura City.” 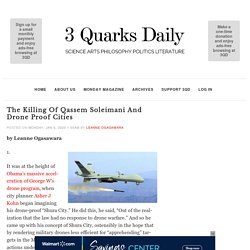 He did this, he said, “Out of the realization that the law had no response to drone warfare.” And so he came up with his concept of Shura City, ostensibly in the hope that by rendering military drones less efficient for “apprehending” targets in the Middle East, the US would be forced to return to police actions under international law. The reaper drone that carried out the killing of Iranian general Qassem Soleimani on January 2 was part of a military program that had its origins in the pilotless hot-air balloons the Austrians used to bomb Venice in the late 19th century, as well as experimental remote control airplanes developed in the First World War. But, in terms of application and ethical issues, they are mainly seen as an extension of the aerial bombing campaigns of WWII. tracking. Khashoggi killing: UN human rights expert says Saudi Arabia is responsible for "premeditated execution" Office of the High Commissioner for Human Rights GENEVA (19 June 2019) – Saudi journalist Jamal Khashoggi was the victim of a premeditated extrajudicial execution, for which the State of Saudi Arabia is responsible, according to a report published today by the UN Special Rapporteur on extrajudicial, summary or arbitrary killings. 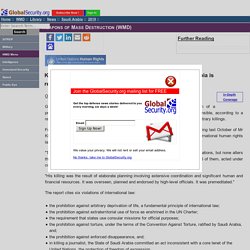 Following a six-month investigation, Agnes Callamard issued her findings into the killing last October of Mr Khashoggi at the Saudi consulate in Istanbul, analyzing evidence on the basis of international human rights law, and considering steps that could have prevented his murder. "The circumstances of Mr Khashoggi's death have led to numerous theories and allegations, but none alters the responsibility of the Saudi Arabia State," the report reads. "Saudi state agents, 15 of them, acted under cover of their official status and used state means to execute Mr. Khashoggi. China, Huawei, and the Coming Technological Cold War. 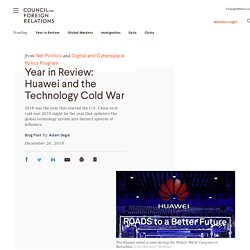 Decoupling. Weaponized interdependence. Whatever you call it, the U.S. -China science and technology relationship is being violently remade. 'Russia to fulfill S-400 sale to Turkey despite Patriot deal' Dw. Untitled. Here’s what the media isn’t telling you about North Korea’s recent missile tests. 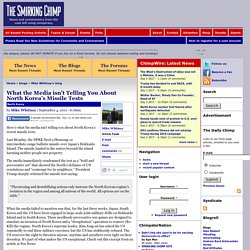 Last Monday, the DPRK fired a Hwasong-12 intermediate-range ballistic missile over Japan’s Hokkaido Island. How America and China Could Stumble to War. WOULD A Chinese leader barely in control of his own country after a long civil war dare attack a superpower that had crushed Japan to end World War II five years earlier by dropping atomic bombs on Hiroshima and Nagasaki? 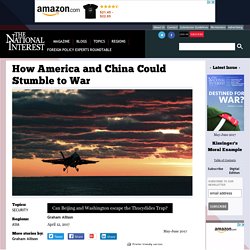 As American troops pushed North Korean forces toward the Chinese border in 1950, Gen. Douglas MacArthur could not imagine so. How we fool ourselves on Russia. Finland: Time to Choose. On June 6 NATO began its BALTOPS naval exercises in the Baltics. 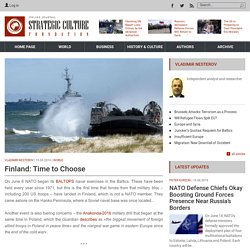 These have been held every year since 1971, but this is the first time that forces from that military bloc – including 200 US troops – have landed in Finland, which is not a NATO member. They came ashore on the Hanko Peninsula, where a Soviet naval base was once located... Nude Celebrity Photos Leak, World Peace Breaks Out. THE PENTAGON — Multiple sources confirmed there would be temporary cease-fires at conflict zones around the world in what is being dubbed a “humanitarian” move to allow soldiers and rebel groups to get to a computer and view the massive trove of nude celebrity photos that leaked online Sunday. The cease-fires between Israel and Gaza, Ukraine and Russia, and on the Korean peninsula and elsewhere are being hailed by activists as the first time prayers for world peace have finally been answered.

Hopes for long-standing calm were soon dashed however, after ISIS militants resumed their fight against Syrian and Iraqi soldiers when they learned the leaked images had no goats among them. In the image trove leaked online by the 4chan message board were explicit photographs and video of Jennifer Lawrence, Ariana Grande, Kate Upton, and others.

Duffel Blog reached out to Lt. Col. The next Cold War has already begun – in cyberspace. The world is fighting a hidden war thanks to a massive shift in the technologies countries can use to attack each other. Much like the Cold War, the conflict is being fought indirectly rather than through open declarations of hostility. It has so far been fought without casualties but has the potential to cause suffering similar to that of any bomb blast. It is the Cyber War. When we think of cyber attacks, we often think of terrorists or criminals hacking their way into our bank accounts or damaging government websites. But they have now been joined by agents of different governments that are launching cyber attacks against one another. Interview: Benjamin Elman.

Benjamin Elman is a professor of Chinese studies at Princeton University and a leading scholar on the intellectual history of China. He has written widely on the examination system, scholarship, ethics, science and technology and governance in China from the Song Dynasty to the present. His recent publications include: From Philosophy To Philology; Classicism, Politics, and Kinship; A Cultural History of Civil Examinations in Late Imperial China; On Their Own Terms: Science in China, 1550-1900; and A Cultural History of Modern Science in Late Imperial China.

In the new public-private surveillance state, we’re so at home with Big Brother that we’re not just passively watched–we actively display ourselves. (Photo: ‘Pong / Flickr) The Ukraine Imbroglio and the Decline of the American Empire. A CounterPunch Special Report: Reflections on the Wages of “Immoderate Greatness" by ARNO J. MAYER When discussing the Ukraine-Crimea “crisis” it might be hygienic for Americans, including their political class, think-tank pundits, and talking heads, to recall two striking moments in “the dawn’s early light” of the U. S. Land Destroyer. World War 3 Has Already Begun? The Rise of “Sub-Imperialism” The heads of state of the Brazil-Russia-India-China-South Africa BRICS network are coming to Durban in four months, meeting on 26-27 March at the International Convention Centre (ICC), Africa’s largest venue.

Given their recent performance, it is reasonable to expect another ‘1%’ summit, wreaking socio-economic and ecological havoc. And that means it is time for the first BRICS counter-summit, to critique top-down ‘sub-imperialist’ bloc formation, and to offer bottom-up alternatives. Dept. of sucking up: Aren't our dear leaders great! Some high-ranking U.N. officials hired in the wake of Ban Ki-moon's re-election have been receiving something of a hero's welcome at Turtle Bay, marked by the solicitousness one would associate with, say, a visit by North Korean leader Kim Jong Un to a rural hemp factory.