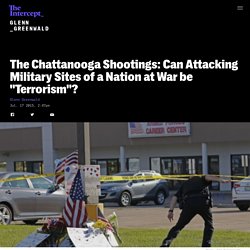 Before anything was known about the suspect other than his name – Mohammod Youssuf Abdulazeez – it was instantly and widely declared by the U.S. media to be “terrorism.” An anonymous senior law enforcement official told the Washington Post: “We will treat this as a terrorism investigation until it can be determined it was not.” That “terrorism” in U.S. political and media discourse means little beyond “violence by Muslims against the west” is now too self-evident to debate (in this case, just the name of the suspect seemed to suffice to trigger application of the label). I’ve documented that point at length many times – most recently, a couple weeks ago when the term was steadfastly not applied to the white shooter who attacked a black church in Charleston despite his clear political and ideological motives – and I don’t want to rehash those points here.

Pentagon Concludes America Is Not Safe Unless It Conquers The World. US Plans War against Russia. The Pentagon has released its “National Military Strategy of the United States of America 2015,” June 2015. 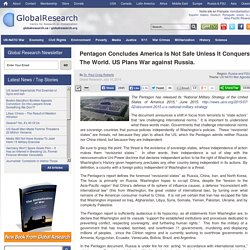 The document announces a shift in focus from terrorists to “state actors” that “are challenging international norms.” It is important to understand what these words mean. Governments that challenge international norms are sovereign countries that pursue policies independently of Washington’s policies. These “revisionist states” are threats, not because they plan to attack the US, which the Pentagon admits neither Russia nor China intend, but because they are independent. Be sure to grasp the point: The threat is the existence of sovereign states, whose independence of action makes them “revisionist states.”

The Pentagon’s report defines the foremost “revisionist states” as Russia, China, Iran, and North Korea. In other words, this is a BS report written by neocons in order to foment war with Russia. Obama's 'helplessness' an act: Snowden reveals scale of US aid to Israel. Alan Watt The Neo-Eugenics War. The Insider - Blair plotted Iraq war with Rupert Murdoch and corporate media. Blair talked to Murdoch on the eve of war in Iraq Tony Blair spoke to Rupert Murdoch [a powerful Jewish Zionist billionaire who personally owns many of the world's key media outlets] at crucial points in his premiership - including on the eve of the Iraq war. 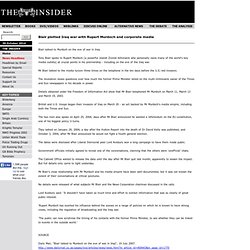 Mr Blair talked to the media tycoon three times on the telephone in the ten days before the U.S. -led invasion. The revelation raises questions over how much the former Prime Minister relied on the multi-millionaire owner of the Times and Sun newspapers in his decade in power. Details obtained under the Freedom of Information Act show that Mr Blair telephoned Mr Murdoch on March 11, March 13 and March 19, 2003. British and U.S. troops began their invasion of Iraq on March 20 - an act backed by Mr Murdoch's media empire, including both the Times and Sun. The two men also spoke on April 25, 2004, days after Mr Blair announced he wanted a referendum on the EU constitution, one of his biggest policy U-turns. War Propaganda Works: Large Majority Of Americans Now Want Military Action In Syria, Iraq. Complete turnaround on attitudes of one year agoSteve Watson Prisonplanet.com September 2, 2014 In a complete 180 degree turnaround, a sizeable majority of Americans now want the government to engage in military action in Syria and Iraq, following the brutal beheading of an American journalist, and other stories of atrocities committed by ISIS terrorists. 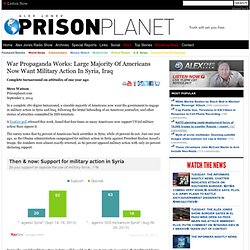 A YouGov poll released this week, found that four times as many Americans now support US led military action than oppose it. The survey notes that 63 percent of Americans back airstrikes in Syria, while 16 percent do not. Just one year ago, as the Obama administration campaigned for military action in Syria against President Bashar Assad’s troops, the numbers were almost exactly reversed, as 60 percent opposed military action with only 20 percent declaring support. Ironically, any US military action in Syria will be sold on the exact opposite reasoning, that militant Islamic rebels are taking over the country. Print this page. NPR Is Laundering CIA Talking Points to Make You Scared of NSA Reporting. 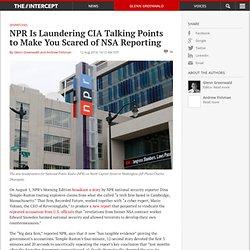 That firm, Recorded Future, worked together with “a cyber expert, Mario Vuksan, the CEO of ReversingLabs,” to produce a new report that purported to vindicate the repeated accusation from U.S. officials that “revelations from former NSA contract worker Edward Snowden harmed national security and allowed terrorists to develop their own countermeasures.” The “big data firm,” reported NPR, says that it now “has tangible evidence” proving the government’s accusations. With this report, Temple-Raston seriously misled NPR’s millions of listeners. To begin with, Recorded Future, the outfit that produced the government-affirming report, is anything but independent. Paul Craig Roberts.