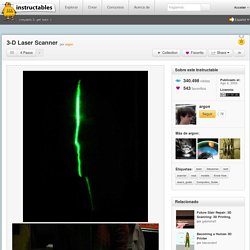 Using just a laser pointer, wine glass, rotating platform, and a digital video camera, you can make accurate 3-D models of an object or person. Build your own line laser for 3D scanning. [Valentin] wanted to experiment with 3D scanning some objects he had around the house, but says he didn’t want to buy a line laser for the project since they are pretty expensive. 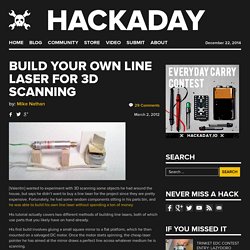 Fortunately, he had some random components sitting in his parts bin, and he was able to build his own line laser without spending a ton of money. His tutorial actually covers two different methods of building line lasers, both of which use parts that you likely have on hand already. His first build involves gluing a small square mirror to a flat platform, which he then mounted on a salvaged DC motor. Once the motor starts spinning, the cheap laser pointer he has aimed at the mirror draws a perfect line across whatever medium he is scanning.

His second line laser uses parts donated from an old hard drive that he no longer used. DIY 3D Laser Scanner Using Arduino. Amputee Simultaneously Controls Two Robotic Prosthetic Limbs With His Thoughts. Science appears to be on a serious roll this week. 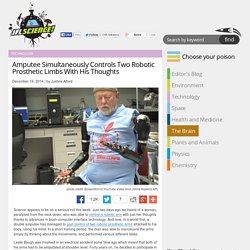 Just two days ago we heard of a woman, paralyzed from the neck down, who was able to control a robotic arm with just her thoughts thanks to advances in brain-computer interface technology. And now, in a world first, a double amputee has managed to gain control of two robotic prosthetic arms attached to his body, using his mind. In a short training period, the man was able to manoeuvre the arms simply by thinking about the movements, and performed various different tasks.

Leslie Baugh was involved in an electrical accident some time ago which meant that both of his arms had to be amputated at shoulder level. Forty years on, he decided to participate in a trial conducted by scientists at Johns Hopkins University. Having made huge progress in developing this limb system, the researchers needed to scrutinize the usability of the prosthetics on volunteers. “I think we are just getting started. [Via Johns Hopkins University APL and PopSci] Arduino / Processing Audio Spectrum Analyzer. LED Cube Spectrum Analyzer : The Arduino sketch - part one. The sketch has two main functions – the first is to capture the levels from the MSGEQ7 and put the values for each frequency band into an array, and the second function is to turn on LEDs that represent the level for each band. 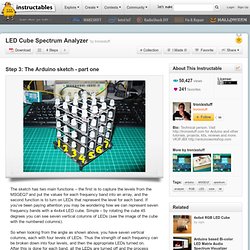 If you’ve been paying attention you may be wondering how we can represent seven frequency bands with a 4x4x4 LED cube. Simple – by rotating the cube 45 degrees you can see seven vertical columns of LEDs (see the image of the cube with the numbered columns). So when looking from the angle as shown above, you have seven vertical columns, each with four levels of LEDs. Sound Reactive LED Strip : Wiring. Sound Responsive LED Frame. This is a product to which I came to craft in my Digital Multimedia class. 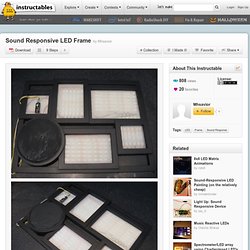 This project was to a point to be a solution to a long standing problem for me. This problem, is that when on a computer I use sound proof headphones and had the tendency to accidentally ignore my surroundings. So, with this project LED frame hanging above my computer screen when my door is knocked on or when people start talking behind me, the LED frame starts to flicker informing me that I need to be paying attention. I understand that I am quite the novice when it comes to working with electronics. Light Sensing LEDs : Lets Experiment!! iRotary - Part One. Finally, a phone I can slam again! 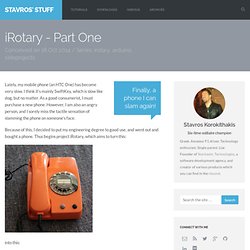 Lately, my mobile phone (an HTC One) has become very slow. I think it’s mainly SwiftKey, which is slow like dog, but no matter. Sound Reactive LED Strip - Todo - Español. RGB LED with Arduino 101. In this tutorial, you will learn how to use a RGB LED with Arduino. 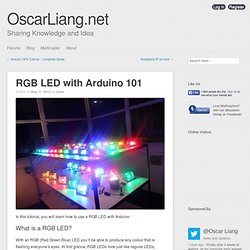 What is a RGB LED? With an RGB (Red Green Blue) LED you’ll be able to produce any colour that is flashing everyone’s eyes. At first glance, RGB LEDs look just like regular LEDs, however, inside the usual LED package, there are actually three LEDs, one red, one green and yes, one blue. By controlling the brightness of each of the individual LEDs you can mix pretty much any color you want. To Learn about the basic LED usage practice, read here. At first using an RGB LED with Arduino seems quite complex, but it quite quickly becomes clear that its no more difficult than controlling one of their single colour counter parts. BIG CLIVES SHOP. (Primarily stuff you can't get elsewhere.) 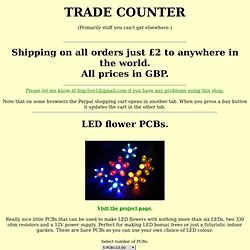 Please let me know at bigclive1@gmail.com if you have any problems using this shop. Note that on some browsers the Paypal shopping cart opens in another tab. When you press a buy button it updates the cart in the other tab. Visit the project page. 10 Watt RGB Flood Light. Simple Plug and Play LED Lighting : Making a giant LED Flood light. The Giant LED flood is using the idea of the 500W halogen spot light housing from Holidaycoro.com. 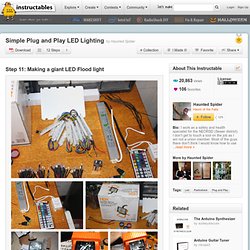 This flood light is designed for Christmas fanatics to light up their display with an array of 16 colors all computer controlled through DMX programming and hooked together with Cat5 cable as a power source / input feed. I did not want the DMX control in my display but rather wanted to control the LED lights individually and set them with an RGB 44 key remote. I changed out the DMX controller piece for the RGB controller, fed the IR receiver to the outside of the light, and used the RCA cable instead of the CAT5 as I didn't need the extra wires for controlling the lights from a computer. Tom Gore's (frightnight_photos) Toms Lights Album. ProyectosLed #36: led RGB 50W con circuito de corriente constante, parte 1. RGB Street Lamp. Hacking a floating RGB LED decorative ball. Rgb Hacks. 10W 900-Lumen RGB LED Flood Light hackable? Recording and playback of the IR signals should work fine. 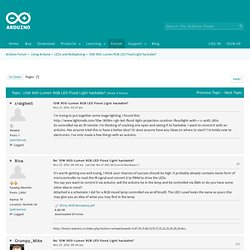 However, if you are doing stage lighting, you are going to need a lot more than 900 lumens. I've been mixing custom LED lighting into my photography lighting, particularly RGB strip lighting. It's referred to as "5050 RGB strip lighting, 60 emitters per meter". It's a really good and cheap choice- runs via 12v, current limiting built in, PWM mixing is really nice. Ton of vendors on ebay sell it, I've bought rolls from several vendors and it's all pretty much the same, probably is literally the same maker..I took an old Fluorescent four foot fixture and ripped out the ballast and such, then just mounted the LED strip (with the sticky back it comes with) in the trough. 24 watts of red, green, and blue each per 5 meters, 72 watts total for around twenty five to thirty dollars.. 300 SMD RGB LED's ready to go.

Back up the band with some RGB stage lights. Fresh off the 72-hour madness of the Red Bull Creation contest some of the folks a North Street Labs took on a stage lighting project. Guitar EQ levels trigger the stage lights. From 300W to 10W — A LED Lighting Solution. Halogen lights are great — they produce lots of bright warm light, but they suck a lot of juice to run.

[Sven] had found a nice floor lamp years ago that was in pretty rough shape — his wife redecorated it, and he fixed it up, but between the 300W power consumption and the lack of a dimmer circuit (this thing was bright!) , he knew he had to upgrade. Like we recommend for all projects, [Sven] started by setting some goals for the conversion. He wanted to keep the warm light color tone, produce over 700lm, allow for dimming via remote, and work with presence detection. Hacking a Streetlight with Lasers. Steampunk Design - Workshop. Based on the invention of Mr Junophor and his research in the field of high voltage modules (Plasma-Converter) has my workshop Steampunk-Design succeeded in boost the plasma power.