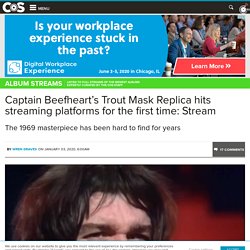 Stream it in full below via Spotify. The 1969 classic set a new standard for rock experimentation, combining blues, free jazz, spoken narration, and discordant polytones across 28 expansive tracks. Trout Mask Replica was produced by Frank Zappa and released on the label he co-founded with Herb Cohen, Straight Records. After Zappa’s death in 1993, Straight Records fell into disarray.

While a subsequent deal with Warner Bros. liberated parts of the Straight catalog, other albums were hard to find until after Cohen’s death in 2010. (Read: The Top 25 Rock Albums of the 2010s) Destroyer shares “Cue Synthesizer” from new album. Have You Met Inez Jones? Mention West Coast jazz and you probably think of musicians such as Chet Baker, Bud Shank, Art Pepper, Russ Freeman, Conte and Pete Candoli, Shelly Manne, Lou Levy and Jack Sheldon. 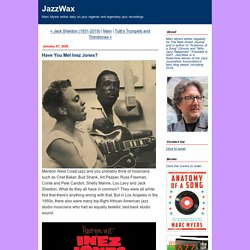 What do they all have in common? They were all white. Timothée Chalamet in Talks For Bob Dylan Biopic. An upcoming new movie from director James Mangold (Walk the Line, Ford v Ferrari, Logan) will cover the early years of Bob Dylan’s career, with Little Women star Timothée Chalamet in talks to play Dylan. 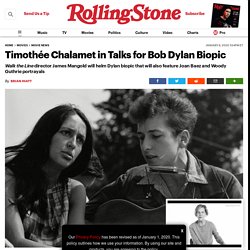 “It starts at 19 when he arrives in New York City,” a source familiar with the film tells Rolling Stone. “And also heavily involves the rest of the rest of the folk scene at the time.” Pete Seeger, Joan Baez, the then-hospitalized Woody Guthrie and other key figures of the scene will all be characters in the movie, according to the source. Brooklynvegan. Townsquare Media, Inc. and its subsidiaries and affiliates (individually or collectively, “TSM” or “we/our/us”) respect your privacy and are committed to protecting it through our compliance with this policy.

This policy describes the type of information we may collect from you and or that you may provide us when you interact with our websites, mobile applications, email, and online services, participate in our loyalty program, or register for one of our events (our “Services”). 'La Notte' (1961) There's good news and so-so news. 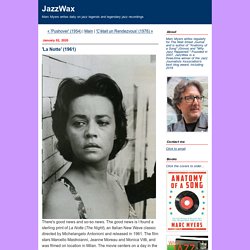 The good news is I found a sterling print of La Notte (The Night), an Italian New Wave classic directed by Michelangelo Antonioni and released in 1961. The film stars Marcello Mastroianni, Jeanne Moreau and Monica Vitti, and was filmed on location in Milan. The movie centers on a day in the life of an unfaithful married couple and their loveless relationship. La Notte is the second part of a trilogy of films by Antonioni, starting with L'Avventura in 1960 and ending with L'Eclisse in 1962. [Photo above of Jeanne Moreau in La Notte] NPR Choice page. Teenagers Who Book Punk Shows At Chain Restaurants Are Heroes.

Outside of a few lucky cities, America has spent the past few decades transforming into an undifferentiated landscape of strip malls and identical chain establishments. 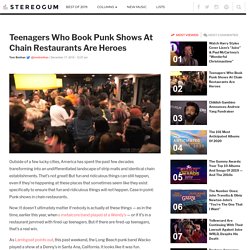 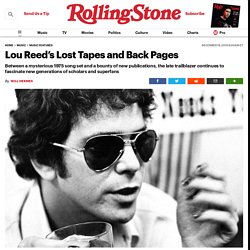 One side was a mix of live Reed songs recorded at recent tour dates. The other was an apparently homemade demo of a dozen songs based on his friend and mentor’s newly-published The Philosophy of Andy Warhol: From A to B & Back Again, published the same year. The idea, it seems, was to sketch out a kind of musical theater piece. NPR Choice page. Italian Romantic Pop: 1960s. Italy's golden era of romantic pop ran from roughly 1960 to 1965 but extended into the early '70s. 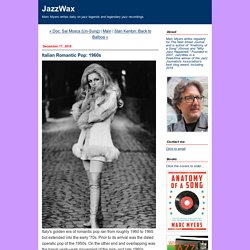 Prior to its arrival was the dated operatic pop of the 1950s. On the other end and overlapping was the banal yeah-yeah movement of the mid- and late 1960s. Sandwiched in between was this love-struck pop ballad style triggered by a new generation of young adults who were children during World War II. Documentary: Jim Hall. Andrew Sarlo: Sanctuary of Possibility. Andrew Sarlo's sense of being grounded, coupled with his simultaneous respect for personality and human emotion made for a unique and rewarding interview experience. 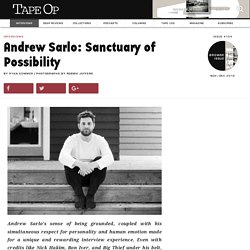 Brooklynvegan. Townsquare Media, Inc. and its subsidiaries and affiliates (individually or collectively, “TSM” or “we/our/us”) respect your privacy and are committed to protecting it through our compliance with this policy. 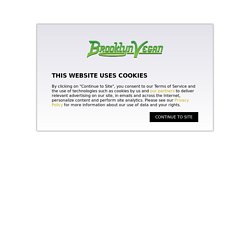 This policy describes the type of information we may collect from you and or that you may provide us when you interact with our websites, mobile applications, email, and online services, participate in our loyalty program, or register for one of our events (our “Services”). “You/your/user(s)” means you as a user of our Services. We offer the Services, including all information, tools and features available from the Services, to you conditioned upon your acceptance of all the terms, conditions, policies and notices stated here, which you accept by continuing to utilize the Services. Guide to Contents: Walls of Sound: Rudy VanderLans Locates 18 Classic Los Angeles Recording Studios. Big Thief Play "Not" & "Cattails" Live In Studio: Watch.

All around Al Gore’s internet, you will find many, many videos of bands playing their songs in various live-in-studio settings. We at Stereogum do not usually post those videos. But right now, Big Thief are the exceptions to a whole lot of rules. Big Thief have had a tremendous 2019. They’ve released two great albums, U.F.O.F. and Two Hands. They’ve transformed their already-vital live show into something legendary. This morning, Big Thief shared videos of themselves playing the Two Hands tracks “Not” and “Cattails” live in Brooklyn’s Bunker Studios. NPR Choice page. Jim Heath is Reverend Horton Heat.

Reverend Horton Heat has been pushing the rockabilly envelope since 1985. Lead singer and guitarist Jim Heath is certainly the focal point, but his pal, Jimbo Wallace, has been slapping the upright bass alongside him for most of the ride. The album Whole New Life had just come out when I dropped in at Portland's Doug Fir Lounge to meet Jim before the (excellent) show to talk about almost 30 years of making records. Oh Sees releasing a box set of their albums on 8-Track cartridges. Oh Sees are putting out a box set with 12 of their albums…on 8-Track. Really. The format, which peaked in the mid-’70s, is now home to albums The Master’s Bedroom Is Worth Spending A Night In, Help, Castlemania, Carrion Crawler/The Dream EP, Putrifiers II, Floating Coffin, Drop, Mutilator Defeated at Last, A Weird Exits, Orc, Memory of a Cut Off Head, and Smote Reverser.

Every 8-track cart in this collection was reconditioned by hand from 40+ year old cartridges and each album is on a specific color and hand numbered cartridge. Housed in a box featuring new artwork by longtime collaborator Elzo Durt, Oh Sees/Thee Oh Sees/OCS: The 8-Track Collection also comes with box also comes with a 36-page fanzine, a 5×7 photo signed by Oh Sees main man John Dwyer, plus iron-on patches, pins and stickers. It took them a year to put this to put the 100 box sets together, 60 of which are for sale to the public.

Preorders are available Monday, November 25 at 10 AM Pacific. Antibalas "Fight Am Finish" Brooklynvegan. Townsquare Media, Inc. and its subsidiaries and affiliates (individually or collectively, “TSM” or “we/our/us”) respect your privacy and are committed to protecting it through our compliance with this policy. This policy describes the type of information we may collect from you and or that you may provide us when you interact with our websites, mobile applications, email, and online services, participate in our loyalty program, or register for one of our events (our “Services”). Watch Danny Brown perform “Best Life” on Fallon. Danny Brown was the musical guest on Tuesday night's Tonight Show. Brittany Howard and Shawn Everett: Bloody Marys and the Perfect Mix. Soho Scene '64 and '65. NPR Choice page.