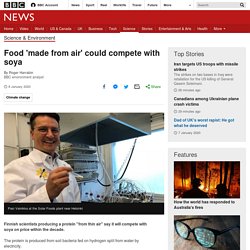 The protein is produced from soil bacteria fed on hydrogen split from water by electricity. The researchers say if the electricity comes from solar and wind power, the food can be grown with near-zero greenhouse gas emissions. If their dreams are realised, it could help the world tackle many of the problems associated with farming. When I visited Solar Foods' pilot plant on the outskirts of Helsinki last year the researchers were raising funds for expansion. Now they say they have attracted 5.5m euros of investment, and they predict – depending on the price of electricity – that their costs will roughly match those for soya production by the end of the decade - perhaps even by 2025.

Lacking in taste? I ate a few grains of the precious protein flour - called Solein - and tasted nothing, which is what the scientists have planned. Space age ideas Hope for the future? Folks otg for #KeithLamontScott #charlotte, facing #cmpd teargas attack, here's aftercare. Edward Burtynsky's corrupted landscapes – in pictures. 30 Reasons Your Next Car Should Be Electric. Agriculture Published on August 31st, 2016 | by Zachary Shahan August 31st, 2016 by Zachary Shahan I’ll let you in on a little secret: we’re electric car fans here on “The CleanTechnica Show.” 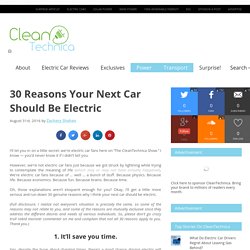 I know — you’d never know it if I didn’t tell you. However, we’re not electric car fans just because we got struck by lightning while trying to contemplate the meaning of life (which may or may not have actually happened). Oh, those explanations aren’t eloquent enough for you? (Full disclosure: I realize not everyone’s situation is precisely the same, so some of the reasons may not relate to you, and some of the reasons are mutually exclusive since they address the different desires and needs of various individuals. 1. Yes, despite the hype about charging times, there’s a good chance driving electric will save you time. If you have charging stations at work, the home + work charging will probably cover ~97% of your charging needs. 2.

One of the true wonders of the world are snowflakes, tiny designs made of ice that are so individually unique, so detailed, and so spectacular it's hard to comprehend that they happen naturally and aren't pulled from the depths of our own imaginations. 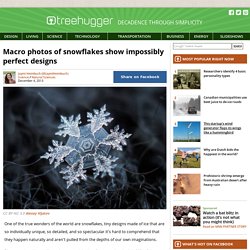 Photographer Alexey Kljatov has a special talent for capturing the brief life of these beautiful ice creations. He features many of his snowflake photos on Flickr. Kljatov says, "I capture snowflakes at open balcony of my house, mostly on glass surface, lighted by LED flashlight from opposite side of glass, and sometimes in natural light, using dark woolen fabrics as background. " Here is some of his impressive work: Alexey Kljatov/CC BY-NC 3.0 Alexey Kljatov/CC BY-NC 3.0 Kljatov describes his technique for shooting snowflakes in a blog post, for those of you who want to try your own hand at this.

Land of Masks and Jewels, Here’s a thing I’ve had around in my head for a... What the climate movement can learn from the war on smoking. If you want to understand how culture can change, head for where the smokers are — or, to be more precise, where they aren’t. 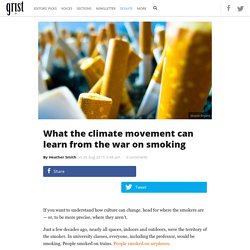 Just a few decades ago, nearly all spaces, indoors and outdoors, were the territory of the smoker. In university classes, everyone, including the professor, would be smoking. People smoked on trains. People smoked on airplanes. Today, you have to hunt for the smokers. What happened? Last year, I interviewed an ad man about what climate change activists can learn from the world of advertising.