The Nature of Water

A Bizarre Form of Water May Exist All Over the Universe. Experts say the discovery of superionic ice vindicates computer predictions, which could help material physicists craft future substances with bespoke properties. 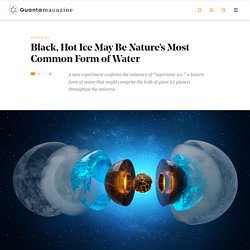 And finding the ice required ultrafast measurements and fine control of temperature and pressure, advancing experimental techniques. “All of this would not have been possible, say, five years ago,” said Christoph Salzmann at University College London, who discovered ices XIII, XIV and XV. “It will have a huge impact, for sure.” These Are the Highest Resolution Photos Ever Taken of Snowflakes. The first chill of a winter storm is enough to send most people indoors, but not Nathan Myhrvold. 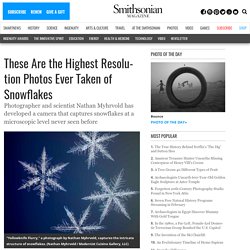 The colder the weather, the better his chances are of capturing a microscopic photograph of a snowflake. Now, nearly two years in the making, Myhrvold has developed what he bills as the “highest resolution snowflake camera in the world.” Recently, he released a series of images taken using his creation, a prototype that captures snowflakes at a microscopic level never seen before. Myhrvold, who holds a PhD in theoretical mathematics and physics from Princeton University and served as the Chief Technology Officer at Microsoft for 14 years, leaned on his background as a scientist to create the camera.

“In the back of my mind, I thought I’d really like to take snowflake pictures,” Myhrvold says. Photographing snowflakes is nothing new. “Light could melt the snowflake, so I found a company in Japan that makes LED lights for industrial purposes,” he says. Kenneth G. The Effect of Human Intentions On Water Crystal Formation. We are having a Total Solar Eclipse in Sagittarius on December 14th for the majority of the world and in the early hours of the 15th for Eastern Asia and Australia area. 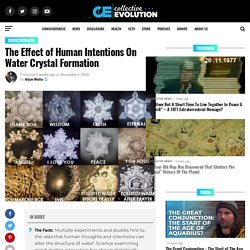 It will be visible from the majority of South America and from a small portion of Africa. The path of totality will cross over parts of Chile and Argentina which will be the only spots to see the full eclipse. All other areas of visibility will only see partial eclipses depending on their proximity to the eclipse path. A Solar Eclipse is a much more significant type of New Moon which influences a longer term period then a regular one. This is when it occurs near the Lunar Nodes, which is where the path of the Sun and Moon intersect from our perspective on Earth. Eclipses reflect changes, endings, beginnings, and evolutionary developments which affect the six months following and could also influence up to six weeks, and sometimes months, prior. Solar Eclipse In Sagittarius, Near Galactic Center Things To Consider. (1) Facebook. Macro Photography Reveals Water Droplets as Miniature Works of Art. Macro photography is more than just close-up images—the technique offers a new perspective on the world, revealing the tiny and often overlooked details of the photographer's subject. 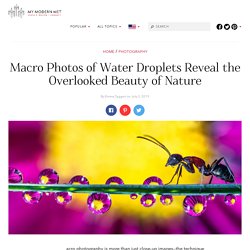 Canadian photographer Don Komarechka explores nature through his macro camera lens, revealing water droplets as miniature works of art. “All of these images are like little sculptures,” Komarechka tells My Modern Met. “Very temporary, and only become beautiful when seen from the right perspective.” Each image from Komarechka’s droplet series shows little spheres of water dotted across petals and flower stems. Through experimenting with perspective, the photographer’s stunning photos reveal how the flowers are reflected in the droplets' surface. Insects are often captured perched next to and among the delicate droplets, further visualizing how fragile these moments in nature are. Scroll down to check out Komarechka’s stunning macro photography and see more from his portfolio on his website.

Behind the scenes. Continued Research Supports The ‘Water Has Memory’ Theory. Amazing discoveries about the properties of water could revolutionize our world! 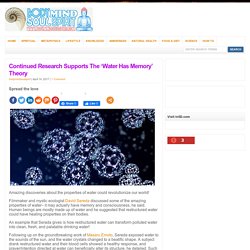 Filmmaker and mystic ecologist David Sereda discussed some of the amazing properties of water– it may actually have memory and consciousness, he said. Human beings are mostly made up of water and he suggested that restructured water could have healing properties on their bodies. An example that Serada gives is how restructured water can transform polluted water into clean, fresh, and palatable drinking water! Following up on the groundbreaking work of Masaru Emoto, Sereda exposed water to the sounds of the sun, and the water crystals changed to a beatific shape. 30 Beautiful Ice And Snow Formations That Look Like Art. This Incredibly Rare Rain Bomb Falling From The Sky Looks Insane. I don’t often align myself with products but this is one that I just had to share! 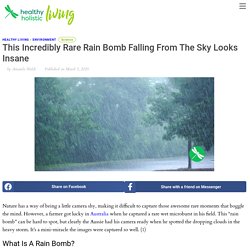 Some of you may already know years ago, I was diagnosed with Multiple Sclerosis. I can still recall what it felt like to have my life change overnight… I went from an Executive Director of a non-profit organization, running marathons, rock climbing, hiking canyons and kayaking to being completely bedridden and staring at a wall for 15 hours a day. Of course, I went to see many doctors but unfortunately I didn’t find the help I needed. So, I had to set off on my own journey to learn my true path to healing. Patterns of water in light: optical solitons observed in non-linear medium - Resonance Science Foundation.

By William Brown, Biophysicist at the Resonance Science Foundation Researchers studying the wave propagation of light in nonlocal, nonlinear media have observed that it behaves the same as waves in water. 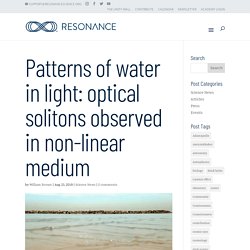 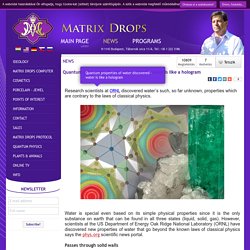 However, scientists at the US Department of Energy Oak Ridge National Laboratory (ORNL) have discovered new properties of water that go beyond the known laws of classical physics says the phys.org scientific news portal. Passes through solid walls During chemistry experiments carried out on the beryl crystal, it was discovered that water molecules under extreme physical or special geological conditions arrange themselves into ultra-small hexagonal shape around a ring and enter a "quantum tunneling" state.

This phenomenon goes beyond the known liquid, solid or gaseous states and, in this case, water behaves quite differently than what we are accustomed to since it is capable of quantum motion. During the experiment it was found that when the water is "trapped" in an enclosed area (e.g. Woda nośnikiem pamięci - odkrycie Masaru Emoto - eprudnik.pl. Chciałbym zwrócić uwagę na pewne naukowe odkrycie, które ma ogromne znaczenia dla naszego życia codziennego. 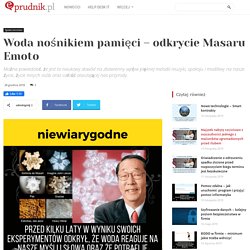 Japoński naukowiec Masaru Emoto przeprowadził ciekawy eksperyment, którego wyniki dają niezwykle dużo do myślenia. A Bizarre Form of Water May Exist All Over the Universe. (3) The Secrets of Water, The Documentary of Viktor Schauberger "Comprehend and Copy Nature" Scientists Show That Water Has Memory - Resonance Science Foundation. A new groundbreaking discovery has been made within the most basic of resources. 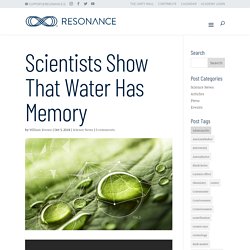 Scientists have just discovered what they have called “The Discovery of The Millennium”, and a huge revelation in human consciousness. Scientists from Germany now believe that water has a memory, meaning that what once was seen as a simple commodity has now been closely examined to reveal a scientific revelation, uncovering a mind-blowing truth. Ancient Hopi Message About Water – Jacob Devaney. Water sustains all life. Her songs begin in the tiniest of raindrops, transform to flowing rivers, travel to majestic oceans and thundering clouds and back to earth again. When water is threatened, all living things are threatened. — Indigenous Declaration on Water, 2001 The Hopi have kept their ancient instructions from Creator, they hold a great wisdom and connection with nature.

They are innovators who grow many things in the Arizona desert and experts in ritual to call forth rain to water their crops. Their connection to water is very sacred and intimate. Watch - Discover. Viktor Schauberger- Nature Was My Teacher. Saturday, February 12, 2011 Viktor Schauberger- Nature Was My Teacher Posted by Anthony Barnao at 3:01 PM Email ThisBlogThis! Share to TwitterShare to FacebookShare to Pinterest. ∞ Woda - Wielka tajemnica ∞ HD ∞ LEKTOR PL. Facebook Watch. Avantgardens - Water spring in the tree. Scientists Show That Water Has Memory. A new groundbreaking discovery has been made within the most basic of resources. Scientists have just discovered what they have called “The Discovery of The Millennium”, and a huge revelation in human consciousness.

Odeleite River, Por­tu­gal. The Water Channel. Gaia - If the power of intention can cause this effect on... Macro photos of snowflakes show impossibly perfect designs. One of the true wonders of the world are snowflakes, tiny designs made of ice that are so individually unique, so detailed, and so spectacular it's hard to comprehend that they happen naturally and aren't pulled from the depths of our own imaginations. Photographer Alexey Kljatov has a special talent for capturing the brief life of these beautiful ice creations. He features many of his snowflake photos on Flickr. Kljatov says, "I capture snowflakes at open balcony of my house, mostly on glass surface, lighted by LED flashlight from opposite side of glass, and sometimes in natural light, using dark woolen fabrics as background.