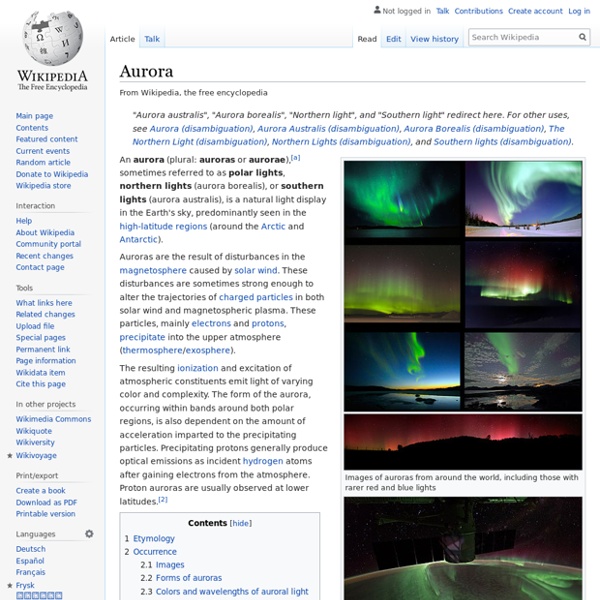 Natural light display that occurs in the sky, primarily at high latitudes (near the Arctic and Antarctic) Images of auroras from around the world, including those with rarer red and blue lights Aurora australis from the ISS, 2017. Video of this encounter: [2] An aurora (plural: auroras or aurorae),[a] sometimes referred to as polar lights, northern lights (aurora borealis), or southern lights (aurora australis), is a natural light display in the Earth's sky, predominantly seen in the high-latitude regions (around the Arctic and Antarctic). Auroras are the result of disturbances in the magnetosphere caused by solar wind. The resulting ionization and excitation of atmospheric constituents emit light of varying color and complexity. Etymology[edit] Occurrence[edit] A geomagnetic storm causes the auroral ovals (north and south) to expand, bringing the aurora to lower latitudes. North America Eurasia Images[edit] Video of the aurora borealis from the International Space Station Forms of auroras[edit] Related:  The Hermedic Arcanum • Metamorphoses by Ovid • -

fanfiction The story of the god Sol and the goddess Luna is one that has been lost over the ages. The warrior king Sol, master of earth and fire, falls in love with the goddess Luna, mistress of wind and water. Few know of their tale... and their tragedy. The characters of Golden Sun will be hinted at in this story, but it is basically a legend that will go along with my actual story. CH.1: The Sun Meets the Moon In the Land of Gaia, there were two, main powers. The second power was the Promised Ones. Though both powers were not hostile towards the other, a long stretch of isolation formed a rift between them. In the same way, the Golden People referred to the Promised ones as, "Winged demons who wish to suck the blood from our children" for their children were their future. Now I, being up in age, but still strong in mind, shall portray to you a tale of valiance, zeal, strength, loss, and tragedy. From the sky, one could get a better view for the scene that begins out story. xxxxx xxxxxxxx "Oh?"

Meleager Ancient Greek mythical character In Greek mythology, Meleager (,[1] Greek: Μελέαγρος, translit. Meléagros) was a hero venerated in his temenos at Calydon in Aetolia. He was already famed as the host of the Calydonian boar hunt in the epic tradition that was reworked by Homer.[2] Meleager is also mentioned as one of the Argonauts. Biography[edit] Meleager was the father of Parthenopeus by Atalanta but he married Cleopatra, daughter of Idas and Marpessa.[7] They had a daughter, Polydora, who became the bride of Protesilaus, who left her bed on their wedding-night to join the expedition to Troy. Mythology[edit] Calydonian Boar Hunt[edit] When Meleager was born, the Moirai (the Fates) predicted he would only live until a piece of wood, burning in the family hearth, was consumed by fire. Meleager's uncles Toxeus, the "archer",[11] and Plexippus grew enraged that the prize was given to a woman. Afterlife[edit] Influences[edit] Family tree[edit] Gallery[edit] Volterra, Italy. Notes[edit] Sources[edit]

Helios Ancient Greek personification of the sun Helios, also Helius (; Ancient Greek: Ἥλιος Hēlios; Latinized as Helius; Ἠέλιος in Homeric Greek), in ancient Greek religion and myth, is the god and personification of the Sun, often depicted in art with a radiant crown and driving a horse-drawn chariot through the sky. He was a guardian of oaths and also the god of sight. Etymology[edit] Description[edit] Helios in his chariot, early 4th century BC, Athena's temple, Ilion Helios is usually depicted as a handsome young man crowned with the shining aureole of the Sun who drove the chariot of the Sun across the sky each day to Earth-circling Oceanus and through the world-ocean returned to the East at night. Helios is seen as both a personification of the Sun and the fundamental creative power behind it[11] and as a result is often worshiped as a god of life and creation. Worship[edit] Archaic and Classical Greece[edit] Conflation with Apollo[edit] Late antiquity[edit] In the Greek Magical Papyri[edit]

Daedalion Mythology[edit] Lover of gods[edit] Daedalion's daughter Chione was said to be so beautiful that she was the object of a thousand men's desire. As it transpired Chione's admirers were not limited to mortal men. Whilst returning from visits to earth both Apollo and Hermes caught sight of Chione and were filled with a burning lust. Death[edit] The attentions of not one but two gods led Chione to boast that her beauty exceeded even that of Artemis. See also[edit] References[edit] Jump up ^ Ovid, Metamorphoses, Book XI, 289Jump up ^ Myers, K.

Tithonus In Greek mythology, Tithonus ( or ; Ancient Greek: Τιθωνός, romanized: Tithonos) was the lover of Eos, Goddess of the Dawn.[i] Tithonus was a prince of Troy, the son of King Laomedon by the Naiad Strymo (Στρυμώ).[ii] The mythology reflected by the fifth-century vase-painters of Athens envisaged Tithonus as a rhapsode, as attested by the lyre in his hand, on an oinochoe (wine jug) of the Achilles Painter, circa 470–460 BC. An asteroid (6998) has been named after Tithonus. Myth[edit] Eos is said to have taken Tithonus, from the royal house of Troy, to be her lover. The mytheme of the goddess' mortal lover is an archaic one; when a role for Zeus was inserted, a bitter twist appeared: according to the Homeric Hymn to Aphrodite, when Eos asked Zeus to make Tithonus immortal, she forgot to ask that he be granted eternal youth. In later tellings, he eventually became a cicada (tettix),[4] eternally living, but begging for death to overcome him. Modern poems[edit] [edit] See also[edit] References[edit]