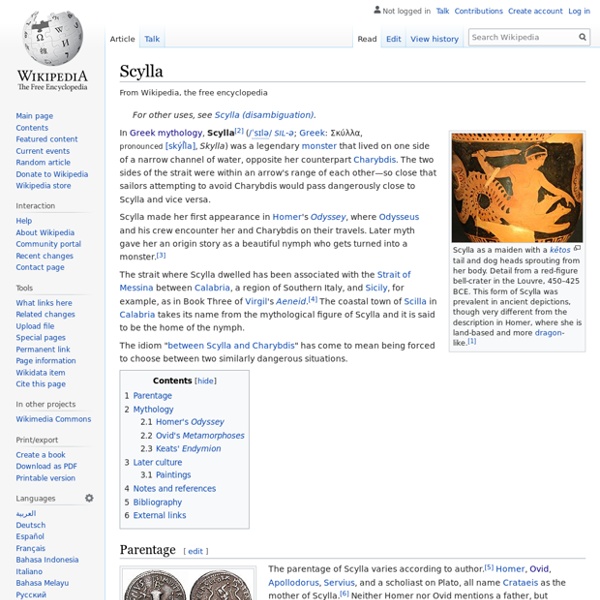 In Greek mythology, Scylla[2] ( SIL-ə; Greek: Σκύλλα, pronounced [skýl̚la], Skylla) was a legendary monster that lived on one side of a narrow channel of water, opposite her counterpart Charybdis. The two sides of the strait were within an arrow's range of each other—so close that sailors attempting to avoid Charybdis would pass dangerously close to Scylla and vice versa. Scylla made her first appearance in Homer's Odyssey, where Odysseus and his crew encounter her and Charybdis on their travels. Later myth gave her an origin story as a beautiful nymph who gets turned into a monster. The strait where Scylla dwelled has been associated with the Strait of Messina between Calabria, a region of Southern Italy, and Sicily, for example, as in Book Three of Virgil's Aeneid.[4] The coastal town of Scilla in Calabria takes its name from the mythological figure of Scylla and it is said to be the home of the nymph. Parentage[edit] Other authors have Hecate as Scylla's mother. Mythology[edit] [edit] J.

Charybdis Whirlpool in the Strait of Messina named for a figure in Greek mythology Charybdis (; Ancient Greek: Χάρυβδις, pronounced [kʰárybdis], Kharubdis) is a sea monster in Greek mythology. Subsequent scholarship has suggested that it was based on a whirlpool in the Strait of Messina. Description[edit] Shirt of Nessus In Greek mythology, the Shirt of Nessus, Tunic of Nessus, Nessus-robe, or Nessus' shirt was the poisoned shirt that killed Heracles. It was once a popular reference in literature. In folkloristics, it is considered an instance of the "poison dress" motif.[1]

Strait of Messina The Strait of Messina (Italian: Stretto di Messina), is a narrow strait between the eastern tip of Sicily (Punta del Faro) and the western tip of Calabria (Punta Pezzo) in the south of Italy. It connects the Tyrrhenian Sea to the north with the Ionian Sea to the south, within the central Mediterranean. At its narrowest point, between Torre Faro and Villa San Giovanni, it is 3.1 km (1.9 mi) wide. At the town of Messina it is 5.1 km (3.2 mi) wide. The strait's maximum depth is about 250 m (820 ft). In 1957, a 220 kV overhead power line was built across the Strait of Messina.

Between Scylla and Charybdis Henry Fuseli's painting of Odysseus facing the choice between Scylla and Charybdis, 1794/6 Being between Scylla and Charybdis is an idiom deriving from Greek mythology, meaning "having to choose between two evils". Several other idioms, such as "on the horns of a dilemma", "between the devil and the deep blue sea", and "between a rock and a hard place" express the same meaning. The myth and the proverb[edit] Scylla and Charybdis were mythical sea monsters noted by Homer; later Greek tradition sited them on opposite sides of the Strait of Messina between Sicily and the Italian mainland. Deianira Ancient Greek mythical character Deianira, Deïanira, or Deianeira[1] (/ˌdeɪ.əˈnaɪrə/;[2] Ancient Greek: Δηϊάνειρα, Dēiáneira, or Δῃάνειρα, Dēáneira, [dɛːiáneːra]), also known as Dejanira,[3] was a figure in Greek mythology whose name translated as "man-destroyer"[4] or "destroyer of her husband".[5][6] She was the wife of Heracles and, in late Classical accounts, his unwitting murderer, killing him with the poisoned Shirt of Nessus. She is the main character in Sophocles' play Women of Trachis. Mythology[edit]

Circe Depictions, even in Classical times, wandered away from the detail in Homer's narrative, which was later to be reinterpreted morally as a cautionary story against drunkenness. Early philosophical questions were also raised whether the change from a reasoning being to a beast was not preferable after all, and this paradox was to have a powerful impact during the Renaissance. Circe was also taken as the archetype of the predatory female. In the eyes of those from a later age, this behaviour made her notorious both as a magician and as a type of the sexually free woman. As such she has been frequently depicted in all the arts from the Renaissance down to modern times.

Minos Mythological king of Crete The Minoan civilization of Crete has been named after him by the archaeologist Sir Arthur Evans. Etymology[edit] "Minos" is often interpreted as the Cretan word for "king",[1] or, by a euhemerist interpretation, the name of a particular king that was subsequently used as a title.

Rebus Allusional device that uses pictures to represent words or parts of words A rebus-style "escort card" from around 1865, to be read as "May I see you home my dear?" A German rebus, circa 1620 A rebus () is a puzzle device which combines the use of illustrated pictures with individual letters to depict words and/or phrases. Jupiter Fifth planet from the Sun in the Solar System Formation and migration Astronomers have discovered nearly 500 planetary systems with multiple planets. Regularly these systems include a few planets with masses several times greater than Earth's (super-Earths), orbiting closer to their star than Mercury is to the Sun, and sometimes also Jupiter-mass gas giants close to their star. Earth and its neighbor planets may have formed from fragments of planets after collisions with Jupiter destroyed those super-Earths near the Sun. As Jupiter came toward the inner Solar System, in what theorists call the grand tack hypothesis, gravitational tugs and pulls occurred causing a series of collisions between the super-Earths as their orbits began to overlap.[24] Researchers from Lund University found that Jupiter's migration went on for around 700,000 years, in a period approximately 2–3 million years after the celestial body started its life as an ice asteroid far from the sun.

Megara Place in Greece Megara (; Greek: Μέγαρα, pronounced [ˈmeɣara]) is a historic town and a municipality in West Attica, Greece. It lies in the northern section of the Isthmus of Corinth opposite the island of Salamis, which belonged to Megara in archaic times, before being taken by Athens. Megara was one of the four districts of Attica, embodied in the four mythic sons of King Pandion II, of whom Nisos was the ruler of Megara. The Sublimation of Mercury The sublimation of the mercury made by the Alberto the Great's Work described in "LeComposé des Composés", Arché, Milano, pages 51 to 93 and for the one of Artephius in "Le Livre Secret Du Trés ancien Philosophe Artephius", traitante of l'Arte ocuclte & de la pierre Philosofale: In a mud or stainless steel porringer, mix intimately with a stainless steel spoon 400 g of canonical Mars or Venus effloresced at the sun and reduced to thin powder in a mortar, 200 g of common salt common crackle under heat and reduced to thin powder also and 200 g of native cinnabar sulphide, well grinded and sieved through a 60 lines per centimetre or 120 lines per inch sieve. The proportions are not critical and you can vary them until you obtain the best result depending on the quality of the mineral used.. If you cant get a good quality native cinnabar, like the one coming from the Almaden mines in Spain, for experimental purpose, you can make an Ethiope mineral. Rubellus Petrinus