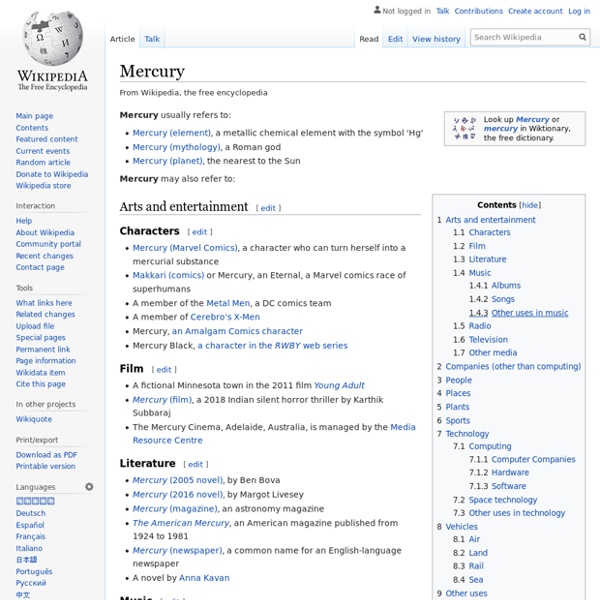 Charybdis Whirlpool in the Strait of Messina named for a figure in Greek mythology Charybdis (; Ancient Greek: Χάρυβδις, pronounced [kʰárybdis], Kharubdis) is a sea monster in Greek mythology. Subsequent scholarship has suggested that it was based on a whirlpool in the Strait of Messina. Britannica Mercury, Latin Mercurius, in Roman religion, god of shopkeepers and merchants, travelers and transporters of goods, and thieves and tricksters. He is commonly identified with the Greek Hermes, the fleet-footed messenger of the gods. The cult of Mercury is ancient, and tradition has it that his temple on the Aventine Hill in Rome was dedicated in 495 bce. There Mercury was associated with Maia, who became identified as his mother through her association with the Greek Maia, one of the Pleiades, who was the mother of Hermes by Zeus; likewise, because of that Greek connection, Mercury was considered the son of Jupiter. Both Mercury and Maia were honoured in the Mercuralia festival on May 15, the dedication day of Mercury’s temple on the Aventine.

Scylla In Greek mythology, Scylla[2] ( SIL-ə; Greek: Σκύλλα, pronounced [skýl̚la], Skylla) was a legendary monster that lived on one side of a narrow channel of water, opposite her counterpart Charybdis. The two sides of the strait were within an arrow's range of each other—so close that sailors attempting to avoid Charybdis would pass dangerously close to Scylla and vice versa. Scylla made her first appearance in Homer's Odyssey, where Odysseus and his crew encounter her and Charybdis on their travels. Later myth gave her an origin story as a beautiful nymph who gets turned into a monster.

Juno From Wikipedia, the free encyclopedia Jump to navigationJump to search Juno could mean: Rebus Allusional device that uses pictures to represent words or parts of words A rebus-style "escort card" from around 1865, to be read as "May I see you home my dear?" A German rebus, circa 1620 Keroessa Story[edit] According to the historian Hesychius of Miletus,[3] as Io, changed into a heifer and being chased by a gadfly on behalf of the jealous Hera, was passing through Thrace, she gave birth to a girl, Keroessa, on the banks of the Golden Horn, by the altar of the nymph Semestra. Keroessa was reared by Semestra and grew up surpassing other local maidens in beauty.