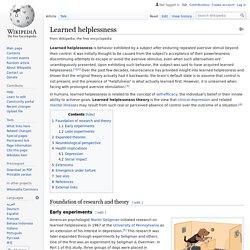 After such experience, the organism often fails to learn or accept "escape" or "avoidance" in new situations where such behavior would likely be effective. In other words, the organism learned that it is helpless in situations where there is a presence of aversive stimuli and has accepted that it has lost control, and thus gives up trying. Such an organism is said to have acquired learned helplessness.[1][2] Learned helplessness theory is the view that clinical depression and related mental illnesses may result from such real or perceived absence of control over the outcome of a situation. [3] Foundation of research and theory[edit] Early key experiments[edit] Iron lung. Mechanical respirator An iron lung, also known as a tank ventilator or Drinker tank, is a type of negative pressure ventilator (NPV); a mechanical respirator which encloses most of a person's body, and varies the air pressure in the enclosed space, to stimulate breathing.[1][2][3][4] It assists breathing when muscle control is lost, or the work of breathing exceeds the person's ability.[1] Need for this treatment may result from diseases including polio and botulism and certain poisons (for example, barbiturates, tubocurarine). 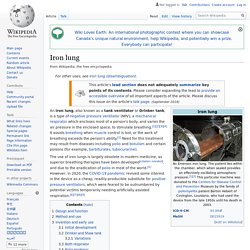 Design and function[edit] Iron lung cylinder (black), patient head exposed through sealed opening. Iron lung. Simulacrum. Circe. Depictions, even in Classical times, wandered away from the detail in Homer's narrative, which was later to be reinterpreted morally as a cautionary story against drunkenness. 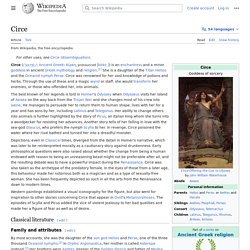 Early philosophical questions were also raised whether the change from a reasoning being to a beast was not preferable after all, and this paradox was to have a powerful impact during the Renaissance. Circe was also taken as the archetype of the predatory female. In the eyes of those from a later age, this behaviour made her notorious both as a magician and as a type of the sexually free woman. As such she has been frequently depicted in all the arts from the Renaissance down to modern times. Western paintings established a visual iconography for the figure, but also went for inspiration to other stories concerning Circe that appear in Ovid's Metamorphoses. 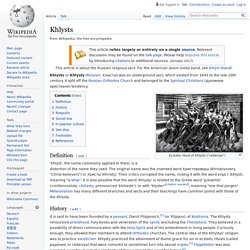 It split off the Russian Orthodox Church and belonged to the Spiritual Christians (духовные христиане) tendency. Ecstatic ritual of Khlysts ("radeniye") Tantalus. Greek mythological figure, son of Zeus Karagöl ("The black lake") in Mount Yamanlar, İzmir, Turkey, associated with the accounts surrounding Tantalus and named after him as Lake Tantalus Tantalus (Ancient Greek: Τάνταλος Tántalos) was a Greek mythological figure, most famous for his eternal punishment in Tartarus. 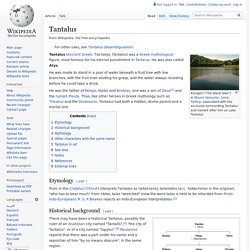 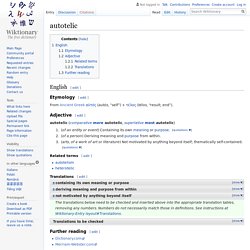 Adjective[edit] autotelic (comparative more autotelic, superlative most autotelic) (of an entity or event) Containing its own meaning or purpose. quotations ▼2012, J.F. Know thyself. Ruins of forecourt of the Temple of Apollo at Delphi, where know thyself was once said to be inscribed Allegorical painting from the 17th century with text Nosce te ipsum "The unexamined life is not worth living. 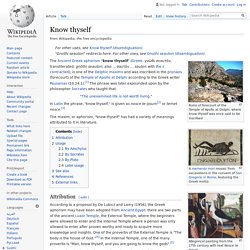 " In Latin the phrase, "know thyself," is given as nosce te ipsum[2] or temet nosce.[3] The maxim, or aphorism, "know thyself" has had a variety of meanings attributed to it in literature. Attribution[edit] According to a proposal by De Lubicz and Lamy (1956), the Greek aphorism may have been adopted from Ancient Egypt: there are two parts of the ancient Luxor Temple, the External Temple, where the beginners were allowed to enter and the Internal Temple where a person was only allowed to enter after proven worthy and ready to acquire more knowledge and insights. 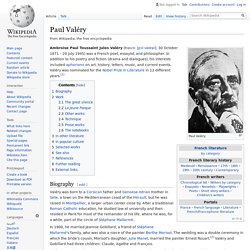 In addition to his poetry and fiction (drama and dialogues), his interests included aphorisms on art, history, letters, music, and current events. Valéry was nominated for the Nobel Prize in Literature in 12 different years.[1] Nadezhda von Meck. Life[edit] Childhood[edit] 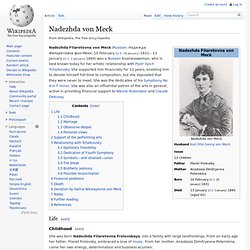 Paul Valéry. Polymath. Individual whose knowledge spans a significant number of subjects In Western Europe, the first work to use polymathy in its title (De Polymathia tractatio: integri operis de studiis veterum) was published in 1603 by Johann von Wowern, a Hamburg philosopher.[5][6][7] Von Wowern defined polymathy as "knowledge of various matters, drawn from all kinds of studies [...] ranging freely through all the fields of the disciplines, as far as the human mind, with unwearied industry, is able to pursue them".[5] Von Wowern lists erudition, literature, philology, philomathy and polyhistory as synonyms. 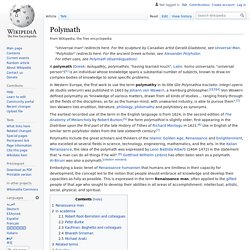 Scylla. In Greek mythology, Scylla[2] ( SIL-ə; Greek: Σκύλλα, pronounced [skýl̚la], Skylla) was a legendary monster that lived on one side of a narrow channel of water, opposite her counterpart Charybdis. The two sides of the strait were within an arrow's range of each other—so close that sailors attempting to avoid Charybdis would pass dangerously close to Scylla and vice versa. Scylla made her first appearance in Homer's Odyssey, where Odysseus and his crew encounter her and Charybdis on their travels. Later myth gave her an origin story as a beautiful nymph who gets turned into a monster. Bahá'í calendar. The first year is dated from 21 March 1844 CE, the year during which the Báb proclaimed his religion.[2] Years are annotated with the date notation of BE (Bahá'í Era), The year 175 BE started on the day of the vernal equinox (in Tehran) in 2018, that is on 21 March 2018.

History[edit] The Bahá'í calendar started from the original Badíʿ calendar, created by the Báb in the Kitabu'l-Asmá'[3] and the Persian Bayán (5:3) in the 1840s.[4] An early version of the calendar began to be implemented during his time.[5] It used a scheme of 19 months of 19 days (19×19) for 361 days, plus intercalary days to make the calendar a solar calendar. 'Scheherazade,' 1001 Nights Retold in a Symphony. Scheherazade. Scheherazade /ʃəˌhɛrəˈzɑːd, -də/, or Shahrazad (Arabic: شهرزاد‎ Šahrazād, derived from Middle Persian Čehrāzād), is a character and the storyteller in One Thousand and One Nights.

This book includes the tales of Aladdin, Ali Baba and many more. Learned helplessness - Wikipedia. Miura fold - Wikipedia. King Lear - Wikipedia. "King Lear and the Fool in the Storm" by William Dyce (1806–1864) Watership Down - Wikipedia. Watership Down is a classic adventure novel, written by English author Richard Adams, published by Rex Collings Ltd of London in 1972. Bahá'í Faith - Wikipedia. Paper tiger - Wikipedia. Paper tiger is a literal English translation of the Chinese phrase zhilaohu (紙老虎). The term refers to something that seems threatening but is ineffectual and unable to withstand challenge. The expression became well known in the West as a slogan used by Mao Zedong's Chinese communist state against its opponents, particularly the U.S. government.