Lucretius - On the Nature of Things 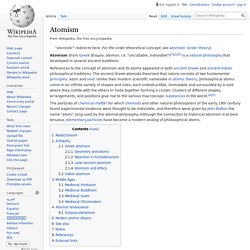 "uncuttable, indivisible")[1][2][3] is a natural philosophy that developed in several ancient traditions. The particles of chemical matter for which chemists and other natural philosophers of the early 19th century found experimental evidence were thought to be indivisible, and therefore were given by John Dalton the name "atom", long used by the atomist philosophy. Although the connection to historical atomism is at best tenuous, elementary particles have become a modern analog of philosophical atoms. Virgil. 1st-century BC Roman poet Virgil is traditionally ranked as one of Rome's greatest poets. 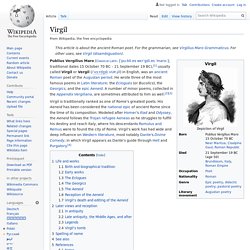 His Aeneid has been considered the national epic of ancient Rome since the time of its composition. Modeled after Homer's Iliad and Odyssey, the Aeneid follows the Trojan refugee Aeneas as he struggles to fulfill his destiny and reach Italy, where his descendants Romulus and Remus were to found the city of Rome. Virgil's work has had wide and deep influence on Western literature, most notably Dante's Divine Comedy, in which Virgil appears as Dante's guide through Hell and Purgatory.[4] Augustan poetry. In Latin literature, Augustan poetry is the poetry that flourished during the reign of Caesar Augustus as Emperor of Rome, most notably including the works of Virgil, Horace, and Ovid. 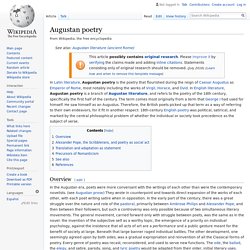 In English literature, Augustan poetry is a branch of Augustan literature, and refers to the poetry of the 18th century, specifically the first half of the century. The term comes most originally from a term that George I had used for himself. He saw himself as an Augustus. Roman Republic. Period of ancient Roman civilization (509–27 BC) The Roman Republic (Latin: Rēs pūblica Rōmāna, Classical Latin: [ˈreːs ˈpuːblɪka roːˈmaːna]) was the era of classical Roman civilization beginning with the overthrow of the Roman Kingdom, traditionally dated to 509 BC, and ending in 27 BC with the establishment of the Roman Empire. 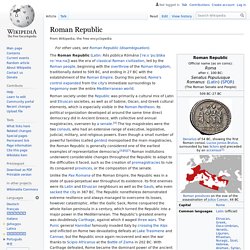 It was during this period that Rome's control expanded from the city's immediate surroundings to hegemony over the entire Mediterranean world. Didacticism. Philosophy emphasizing instructional and informative qualities in literature Didacticism is a philosophy that emphasizes instructional and informative qualities in literature and other types of art.[1][2] Overview[edit] The term has its origin in the Ancient Greek word διδακτικός (didaktikos), "related to education and teaching", and signified learning in a fascinating and intriguing manner.[3] Didactic art was meant both to entertain and to instruct. 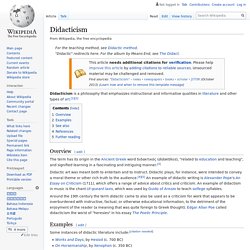 Didactic plays, for instance, were intended to convey a moral theme or other rich truth to the audience.[4][5] An example of didactic writing is Alexander Pope's An Essay on Criticism (1711), which offers a range of advice about critics and criticism. Three-age system. The three-age system is the categorization of history into time periods divisible by three; for example, the Stone Age, Bronze Age, and Iron Age, although it also refers to other tripartite divisions of historic time periods. 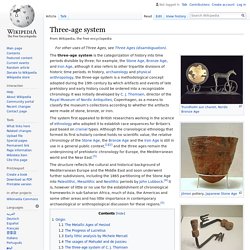 In history, archaeology and physical anthropology, the three-age system is a methodological concept adopted during the 19th century by which artifacts and events of late prehistory and early history could be ordered into a recognizable chronology. It was initially developed by C. J. Epicureanism. Epicureanism is a system of philosophy based upon the teachings of the ancient Greek philosopher Epicurus, founded around 307 BC. 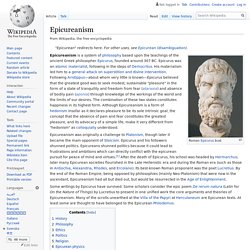 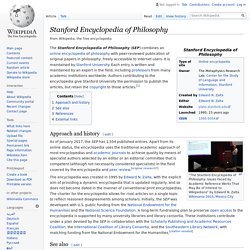 It is maintained by Stanford University. Georgics. The Georgics (/ˈdʒɔːrdʒɪks/; Latin: Georgica [ɡeˈoːrɡɪka]) is a poem by Latin poet Virgil, likely published in 29 BC.[1] As the name suggests (from the Greek word γεωργικά, geōrgika, i.e. 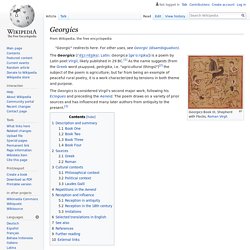 "agricultural (things)")[2] the subject of the poem is agriculture; but far from being an example of peaceful rural poetry, it is a work characterized by tensions in both theme and purpose. The Georgics is considered Virgil's second major work, following his Eclogues and preceding the Aeneid. The poem draws on a variety of prior sources and has influenced many later authors from antiquity to the present.[3] Quintus Tullius Cicero. Quintus Tullius Cicero ( SISS-ə-roh, Classical Latin: [ˈkɪkɛroː]; 102 BC – 43 BC) was a Roman statesman and military leader, the younger brother of Marcus Tullius Cicero. 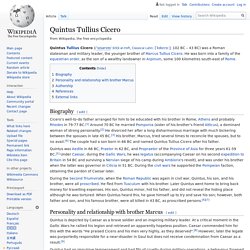 Divine Comedy. Long Italian narrative poem by Dante Alighieri Dante shown holding a copy of the Divine Comedy, next to the entrance to Hell, the seven terraces of Mount Purgatory and the city of Florence, with the spheres of Heaven above, in Michelino's fresco The work was originally simply titled Comedìa (pronounced [komeˈdiːa]; so also in the first printed edition, published in 1472), Tuscan for "Comedy", later adjusted to the modern Italian Commedia. The adjective Divina was added by Giovanni Boccaccio, and the first edition to name the poem Divina Comedia in the title was that of the Venetian humanist Lodovico Dolce,[19] published in 1555 by Gabriele Giolito de' Ferrari. Structure and story[edit] The Divine Comedy is composed of 14,233 lines that are divided into three cantiche (singular cantica) – Inferno (Hell), Purgatorio (Purgatory), and Paradiso (Paradise) – each consisting of 33 cantos (Italian plural canti).

De rerum natura. Opening of the 1483 manuscript copy of De rerum natura by Girolamo di Matteo de Tauris, which had been copied for Pope Sixtus IV. De rerum natura (Latin: [deːˈreːrũn.naːˈtuːraː]; On the Nature of Things) is a first-century BC didactic poem by the Roman poet and philosopher Lucretius (c. 99 BC – c. 55 BC) with the goal of explaining Epicurean philosophy to a Roman audience. The poem, written in some 7,400 dactylic hexameters, is divided into six untitled books, and explores Epicurean physics through poetic language and metaphors.[1] Namely, Lucretius explores the principles of atomism; the nature of the mind and soul; explanations of sensation and thought; the development of the world and its phenomena; and explains a variety of celestial and terrestrial phenomena.

The universe described in the poem operates according to these physical principles, guided by fortuna ("chance"),[2] and not the divine intervention of the traditional Roman deities. Archetype. The concept of an archetype /ˈɑːrkɪtaɪp/ appears in areas relating to behavior, historical psychological theory, and literary analysis. An archetype can be: Etymology[edit] The word archetype, "original pattern from which copies are made", first entered into English usage in the 1540s[1] and derives from the Latin noun archetypum, latinisation of the Greek noun ἀρχέτυπον (archétypon), whose adjective form is ἀρχέτυπος (archétypos), which means "first-molded",[2] which is a compound of ἀρχή archḗ, "beginning, origin",[3] and τύπος týpos, which can mean, amongst other things, "pattern", "model", or "type".[4] It, thus, referred to the beginning or origin of the pattern, model or type.[5] Function[edit] Usage of archetypes in specific pieces of writing is a holistic approach, which can help the writing win universal acceptance.

Plato[edit] Herculaneum. Roman town destroyed by eruption of Mount Vesuvius Located in the shadow of Mount Vesuvius, Herculaneum (, ; Italian: Ercolano) was an ancient Roman town destroyed by volcanic pyroclastic flows in 79 AD. Its ruins are located in the comune of Ercolano, Campania, Italy. Herculaneum is one of the few ancient cities to be preserved more or less intact, with no later accretions or modifications. Titus Pomponius Atticus. Close friends since childhood, Cicero dedicated his work, Laelius de Amicitia (Latin for Treatises on Friendship), to Atticus.

Their correspondence, often written in subtle code to disguise their political observations, is preserved in Epistulae ad Atticum (Letters to Atticus) compiled by Tiro, Cicero's slave (later his freedman) and personal secretary. Biography[edit] Cicero. Astronomy. Ataraxia. Ataraxia (ἀταραξία, literally, "unperturbedness", generally translated as "imperturbability", "equanimity", or "tranquillity") is a Greek term first used in Ancient Greek philosophy by Pyrrho and subsequently Epicurus and the Stoics for a lucid state of robust equanimity characterized by ongoing freedom from distress and worry.

In non-philosophical usage, the term was used to describe the ideal mental state for soldiers entering battle. Achieving ataraxia is a common goal for Pyrrhonism, Epicureanism, and Stoicism, but the role and value of ataraxia within each philosophy varies in accordance with their philosophical theories. The mental disturbances that prevent one from achieving ataraxia vary among the philosophies, and each philosophy has a different understanding as to how to achieve ataraxia. Metonymy. Metonymy (/mɛˈtɒnəmi/)[1] is a figure of speech in which a thing or concept is referred to by the name of something closely associated with that thing or concept.[2] Etymology[edit] Empedocles. Empedocles (/ɛmˈpɛdəkliːz/; Ancient Greek: Ἐμπεδοκλῆς; Empedoklēs; Ancient Greek: [empedoklɛ̂ːs]; c. 490 – 430 BC) was a Greek pre-Socratic philosopher and a citizen of Agrigentum, a Greek city in Sicily. Muses. Hesiod.

Ancient Greek poet Hesiod (;[1] Greek: Ἡσίοδος Hēsíodos, 'he who emits the voice') was an ancient Greek poet generally thought to have been active between 750 and 650 BC, around the same time as Homer.[2][3] He is generally regarded as the first written poet in the Western tradition to regard himself as an individual persona with an active role to play in his subject.[4] Ancient authors credited Hesiod and Homer with establishing Greek religious customs.[5] Modern scholars refer to him as a major source on Greek mythology, farming techniques, early economic thought,[6] archaic Greek astronomy and ancient time-keeping.