Stop Freaking Out. None of This Is New. You think this hasn’t happened before? 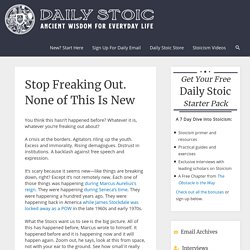 Whatever it is, whatever you’re freaking out about? A crisis at the borders. Agitators riling up the youth. Excess and immorality. Rising demagogues. It’s a Series of High-Water Marks. There’s a beautiful scene in Hunter S. 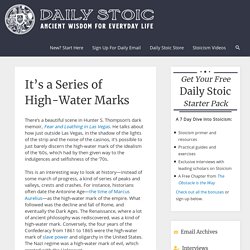 Thompson’s dark memoir, Fear and Loathing in Las Vegas. He talks about how just outside Las Vegas, in the shadow of the lights of the strip and the noise of the casinos, it’s possible to just barely discern the high-water mark of the idealism of the ‘60s, which had by then given way to the indulgences and selfishness of the ‘70s. This is an interesting way to look at history—instead of some march of progress, a kind of series of peaks and valleys, crests and crashes.

For instance, historians often date the Antonine Age—the time of Marcus Aurelius—as the high-water mark of the empire. You Must Be a Good Example. Think of the pressure Marcus Aurelius must have been under. 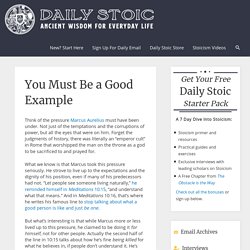 Not just of the temptations and the corruptions of power, but all the eyes that were on him. Forget the judgments of history, there was literally an “emperor cult” in Rome that worshipped the man on the throne as a god to be sacrificed to and prayed for. What we know is that Marcus took this pressure seriously. He strove to live up to the expectations and the dignity of his position, even if many of his predecessors had not. “Let people see someone living naturally,” he reminded himself in Meditations 10:15, “and understand what that means.”

But what’s interesting is that while Marcus more or less lived up to this pressure, he claimed to be doing it for himself, not for other people. Remember what Marcus said about not expecting the “third thing”—that is, gratitude or acknowledgment. Don’t talk about being a good role model. P.S. A Beginner's Guide to Stoic Philosophy. No One Can MAKE You Upset. Who Is Seneca? Inside The Mind of The World's Most Interesting Stoic. This is part of our 3-part series on the three most important Stoic philosophers: Marcus Aurelius, Seneca and Epictetus. 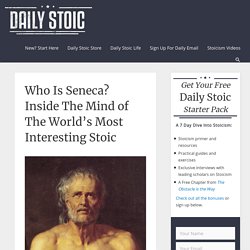 Here you will find a short introduction to Seneca, suggested readings, three exercises/lessons from him as well as a selection of quotes. You can also read our introduction to Stoicism if you are not familiar with the philosophy. Introduction. 50 Stoic Truth-Bombs from Marcus Aurelius to Armor Your Soul. “When you arise in the morning, think of what a precious privilege it is to be alive – to breathe, to think, to enjoy, to love.”— Marcus Aurelius There are few men who stand equal to Marcus Aurelius. 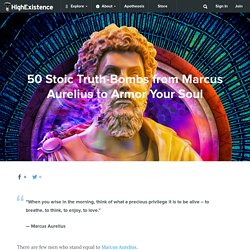 Not for what they have accomplished externally, but for the strides they have made internally. Mastering their inner worlds. Nope, Jordan Peterson ain’t no Stoic. People have been asking my opinion — from a Stoic perspective — about Jordan Peterson for a while now, and the time has finally come. 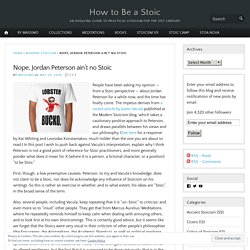 The impetus derives from a recent article by Justin Vacula published at the Modern Stoicism blog, which takes a cautionary positive approach to Peterson, and draws parallels between his views and our philosophy. Stoic advice: impostor syndrome – How to Be a Stoic. [Feel free to submit a question for this column, addressing it at massimo at howtobeastoic dot org. 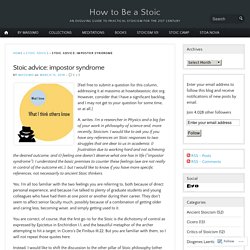 However, consider that I have a significant backlog, and I may not get to your question for some time, or at all.] A. writes: I’m a researcher in Physics and a big fan of your work in philosophy of science and, more recently, Stoicism. I would like to ask you if you have any references on Stoic responses to two struggles that are dear to us in academia: i) frustration due to working hard and not achieving the desired outcome, and ii) feeling one doesn’t deserve what one has in life (“impostor syndrome”). I understand the basic premises to counter these feelings (we are not really in control of the outcome etc.), but I would like to know if you have more specific references, not necessarily to ancient Stoic thinkers.

I have learned that lesson early on in my academic career, way before I turned to Stoicism as a philosophy of life. Shall the truth make you free? Hinduism, Buddhism, Stoicism, Skepticism and the nature of philosophical inquiry – How to Be a Stoic. What is philosophy for? 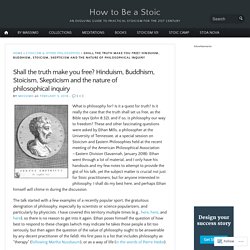 Is it a quest for truth? Is it really the case that the truth shall set us free, as the Bible says (John 8:32), and if so, is philosophy our way to freedom? These and other fascinating questions were asked by Ethan Mills, a philosopher at the University of Tennessee, at a special session on Stoicism and Eastern Philosophies held at the recent meeting of the American Philosophical Association—Eastern Division (Savannah, January 2018). Stoic Q&A: the four virtues – How to Be a Stoic. I was planning on writing a post on the definitions of the four cardinal Stoic virtues: practical wisdom (or prudence), justice, courage, and temperance, because discussions (and confusion) often arise about them among people interested in modern Stoicism. 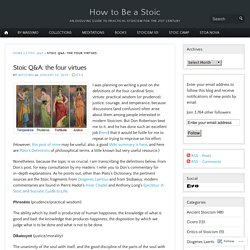 But Don Robertson beat me to it, and he has done such an excellent job (here) that it would be futile for me to repeat or trying to improve on his effort. (However, this post of mine may be useful; also, a good Wiki summary is here; and here are Plato’s Definitions of philosophical terms, a little known but very useful resource.) Nonetheless, because the topic is so crucial, I am transcribing the definitions below, from Don’s post, for easy consultation by my readers. I refer you to Don’s commentary for in-depth explanations. Phronêsis (prudence/practical wisdom) Dikaiosynê (justice/morality) What The Stoics Thought About Love. Of course the image of the Stoics is of a passionless, emotionless life. 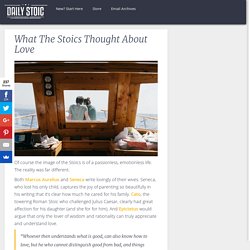 The reality was far different. Both Marcus Aurelius and Seneca write lovingly of their wives. Seneca, who lost his only child, captures the joy of parenting so beautifully in his writing that it’s clear how much he cared for his family. Who Is Epictetus? From Slave To World's Most Sought After Philosopher. This is part of our 3-part series on the three most important Stoic philosophers: Marcus Aurelius, Seneca and Epictetus. Here you will find a short introduction to Epictetus, suggested readings, three exercises/lessons from him as well as a selection of quotes.

You can also read our introduction to Stoicism if you are not familiar with the philosophy. Introduction Part of what makes Stoicism fascinating to study is that three of its most well-known practitioners ranged widely in terms of where they stood in society. Stoicism and Emotion, II: the “pathetic” syllogism – How to Be a Stoic. Stoicism is not about suppressing emotions.

At least, not exactly. Last time we have seen that Margaret Graver, in her Stoicism and Emotion, makes the point that for the Stoics (as in modern cognitive science) there is a fundamental distinction between feelings and emotions. Feelings are raw materials of our subjective awareness, and they can evolve into cognitively informed emotions of different types, depending on the (implicit or explicit) judgment that accompanies them. Daily Stoic Amor Fati Excerpt from The Obstacle Is The Way. Daily Stoic 7 Steps Guide To Controlling Your Perceptions Like A Stoic.01. Stoic advice: I work at a place whose values I find morally objectionable – How to Be a Stoic. Roman chamber pot from Pompeii L. wrote: I work at a Christian university, the policies of which I disagree with more and more. I find the institution’s stance on homosexuality especially repugnant. I consider it to be harmful to the LGBTQ students who are here and to those who are alumni.

I have really struggled in the past year or so trying to reconcile working here with my beliefs about the harm the institution does with its views and its proselytizing. It seems to me that I am condoning and approving of their stance, or at least making others think that I do, when I claim this place as a workplace. I know that I cannot control what the institution does. There is a famous section of Epictetus’ Discourses that directly addresses your problem, even though, of course, the specific situation that Epictetus uses as an example is completely different from yours. “Consider at what price you sell your integrity; but please, for God’s sake, don’t sell it cheap.” Daily Stoic Evening Ritual Day in Review.01.

Daily Stoic Morning Ritual.01. Daily Stoic The Stoic Reading List.01. Stoicism. School of Hellenistic Greek philosophy Stoicism is a school of Hellenistic philosophy which was founded by Zeno of Citium, in Athens, in the early 3rd century BC. Stoicism is a philosophy of personal ethics informed by its system of logic and its views on the natural world. According to its teachings, as social beings, the path to eudaimonia (happiness) for humans is found in accepting the moment as it presents itself, by not allowing oneself to be controlled by the desire for pleasure or fear of pain, by using one's mind to understand the world and to do one's part in nature's plan, and by working together and treating others fairly and justly. Stoicism flourished throughout the Roman and Greek world until the 3rd century AD, and among its adherents was Emperor Marcus Aurelius. It experienced a decline after Christianity became the state religion in the 4th century AD.

Name[edit] Stoicism was originally known as ‘Zenonism’, after the founder Zeno of Citium. Basic tenets[edit] Logic[edit] Seneca to Lucilius: on the true joy which comes from philosophy – How to Be a Stoic. Family Joy, by Megan Duncanson Letter XXIII of Seneca to his friend Lucilius dwells on a distinction between false and true joy, one that is well worth discussing because it tells us something interesting about Stoicism and emotions.

(For my ongoing commentary on the Letters, see here.) Seneca begins by telling Lucilius that he wishes to write to him about things that matter, not waste time chatting about the weather or the other trivialities that people talk about when they have nothing to say. He then gets straight to the point: “Do you ask what is the foundation of a sound mind?