"Discovers 33 Stars Over 11 Billion Years Old With Earth-Like Planets" One of the biggest questions in astrophysics is: does life exists beyond earth? 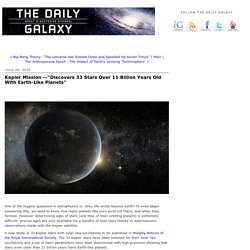 To even begin answering this, we need to know how many planets like ours exist out there, and when they formed. Mars One. Astrobiology: Life in the Universe. Motivated by the rapidly increasing number of known Earth-sized planets, the increasing range of extreme conditions in which life on Earth can persist, and the progress toward a technology that will ultimately enable the search for life on exoplanets, the Vatican Observatory and the Steward Observatory announce a major conference entitled The Search for Life Beyond the Solar System: Exoplanets, Biosignatures & Instruments. 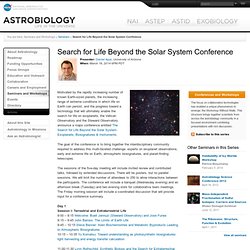 The goal of the conference is to bring together the interdisciplinary community required to address this multi-faceted challenge: experts on exoplanet observations, early and extreme life on Earth, atmospheric biosignatures, and planet-finding telescopes. The sessions of the five-day meeting will include invited review and contributed talks, followed by extended discussions. There will be posters, but no parallel sessions. Stjörnulíffræði. Ef alheimurinn er uppfullur af lífi, hvers vegna höfum við þá ekki orðið vör við það? 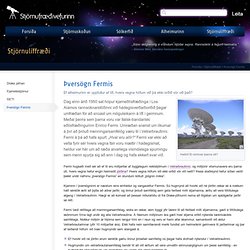 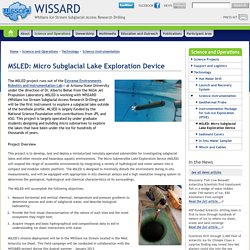 Alberto Behar from the NASA Jet Propulsion Laboratory. Discovery: Fish Live beneath Antarctica. Stunned researchers in Antarctica have discovered fish and other aquatic animals living in perpetual darkness and cold, beneath a roof of ice 740 meters thick. 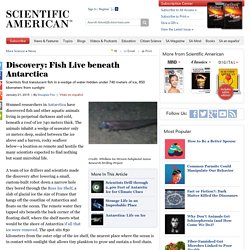 The animals inhabit a wedge of seawater only 10 meters deep, sealed between the ice above and a barren, rocky seafloor below—a location so remote and hostile the many scientists expected to find nothing but scant microbial life. A team of ice drillers and scientists made the discovery after lowering a small, custom-built robot down a narrow hole they bored through the Ross Ice Shelf, a slab of glacial ice the size of France that hangs off the coastline of Antarctica and floats on the ocean.

The remote water they tapped sits beneath the back corner of the floating shelf, where the shelf meets what would be the shore of Antarctica if all that ice were removed. “I’m surprised,” says Ross Powell, a 63-year old glacial geologist from Northern Illinois University who co-led the expedition with two other scientists. Fish! European Extremely Large Telescope. "CODEX" redirects here. 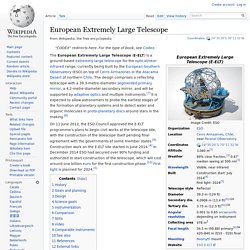 For the type of book, see Codex. The European Extremely Large Telescope (E-ELT) is a ground-based extremely large telescope for the optical/near-infrared range, currently being built by the European Southern Observatory (ESO) on top of Cerro Armazones in the Atacama Desert of northern Chile. The design comprises a reflecting telescope with a 39.3-metre-diameter segmented primary mirror, a 4.2-metre-diameter secondary mirror, and will be supported by adaptive optics and multiple instruments.[7] It is expected to allow astronomers to probe the earliest stages of the formation of planetary systems and to detect water and organic molecules in proto-planetary discs around stars in the making.[8] History[edit] Early designs included a segmented primary mirror with a diameter of 42 metres and area of about 1,300 m2, with a secondary mirror with a diameter of 5.9 m. 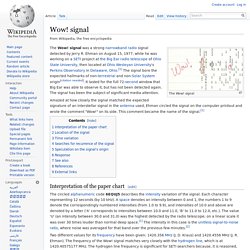 Signal was a strong narrowband radio signal detected by Jerry R. Ehman on August 15, 1977, while he was working on a SETI project at the Big Ear radio telescope of Ohio State University, then located at Ohio Wesleyan University's Perkins Observatory in Delaware, Ohio.[1] The signal bore the expected hallmarks of non-terrestrial and non-Solar System origin[citation needed]. It lasted for the full 72-second window that Big Ear was able to observe it, but has not been detected again. Iceland2015. General The summer school "Water, ice and the Origin of Life in the Universe", which will be held in Iceland from 1 to 14 July 2015, aims to give participants a thorough high-level introduction into the role of water in the evolution of life in the cosmos, starting from formation of water molecules in space and ending with evolution of the first organisms. 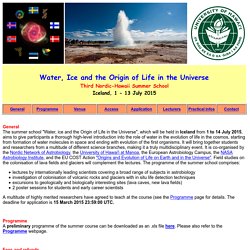 It will bring together students and researchers from a multitude of different science branches, making it a truly multidisciplinary event. Iceland2015. Professor Head studies themes of planetary evolution and the role of volcanism and tectonism in the formation and evolution of planetary crusts. 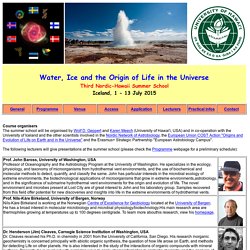 Several research projects are underway in the field in Antarctica, on the Earth's seafloor, and in assessing data from planetary surfaces to study climate change on Mars, volcanism on the Moon, Mars and Venus, the geology of the surface of Mercury and the tectonic and volcanic evolution of icy satellites. Prof. Head earned a B.S. from Washington and Lee University in 1964 and his Ph.D. from Brown University in 1969. During 4 years with Bellcomm, Inc. in Washington, DC in the NASA Systems Analysis Branch, his research focus shifted to planetary geology studies relating to the Apollo Lunar Exploration Program including training of Apollo astronauts.