Personal Injury attorneys at Osborne & Francis are experienced in helping those who are injured by car accidents, medical mistakes and products, dangerous drugs, and more. Visit Us:-

Medical Malpractice Attorneys - Osborne & Francis Law Firm, PLLC. There is no more exciting time in a couple’s life than when they are expecting a child. 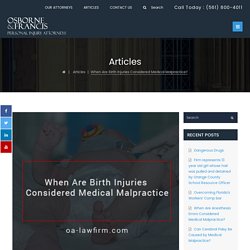 It’s a time of anticipation, hope, and joy, as they await the birth of their baby. Fortunately, for most parents, pregnancies, labor, and delivery go smoothly and they bring home a beautiful and healthy baby shortly after it’s born. However, there are times that this doesn’t happen due to complications that put both mother and child at risk. Nationwide COVID-19 & Coronavirus Lawsuit Attorneys. Amidst the nationwide pandemic brought about by COVID-19, attorneys in Boca Raton are still hard at work fighting for those in need of proper representation. 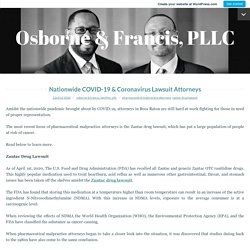 The most recent focus of pharmaceutical malpractice attorneys is the Zantac drug lawsuit, which has put a large population of people at risk of cancer. Read below to learn more. Zantac Drug Lawsuit As of April 1st, 2020, The U.S. Experienced Pedestrian Accident Lawyer at Osborne & Francis Law Firm. Motor vehicle accidents involving pedestrians often lead to devastating and life-altering injuries and consequences. 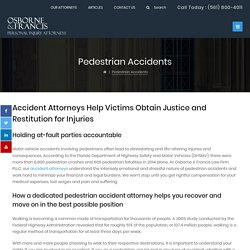 According to the Florida Department of Highway Safety and Motor Vehicles (DHSMV), there were more than 8,800 pedestrian crashes and 606 pedestrian fatalities in 2014 alone. What is a Deposition in a Personal Injury Case? Most personal injury cases involve depositions. 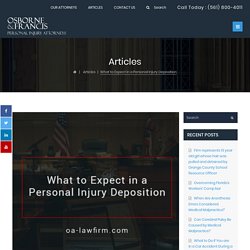 Because most of these types of cases are settled before they make it to trial, it may be the only time that you are questioned by the counsel from the other side. Having to participate in a deposition may be daunting, causing some nervousness, especially when you don’t know what to expect. The following outlines what normally happens in personal injury depositions. What is a Deposition? Basically, a deposition is a meeting where the opposing counsel is able to question you about the case. Getting Legal Help for Your Medical Malpractice Case. Medical errors occur much more frequently than you probably imagine. 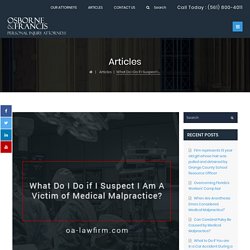 There are many ways that it can happen, and you might not even be aware that you have been a victim. It is a reality that sometimes negative medical outcomes just happen, and no one is to blame. However, there are also many instances when patients suffer negative consequences due to medical mistakes that could have been prevented. How do you know which has happened to you or your loved one? First, you need to know exactly what medical malpractice is. Get Legal Help in a Wrongful Death Case. Protecting Your Legal Rights After An Accident Or Injury. Accidents are terrible events. 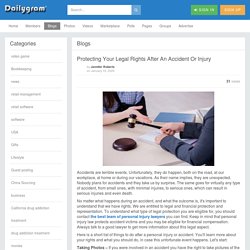 Unfortunately, they do happen, both on the road, at our workplace, at home or during our vacations. As their name implies, they are unexpected. Nobody plans for accidents and they take us by surprise. The same goes for virtually any type of accident, from small ones, with minimal injuries, to serious ones, which can result in serious injuries and even death. 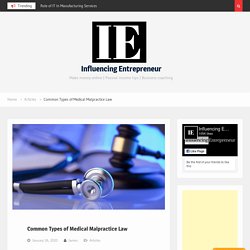 Medical malpractice can be defined as any breach done by a medical professional which causes injury or death. Simply put, whenever a doctor or a nurse makes an error during medical treatment, and that error translates into injury or death, that doctor or nurse can be accused of medical malpractice. This type of accusation is very serious, with significant financial and legal consequences. Fortunately, this accusation is fairly rare in the medical environment. The Slip and Fall Lawyers at Osborne & Francis, PLLC. Key Reasons Why You Need A Product Liability Attorney.

Shopping is not just a hobby, relaxing activity or regular pastime. 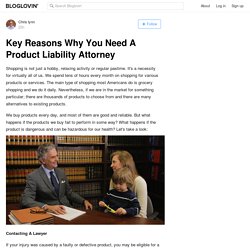 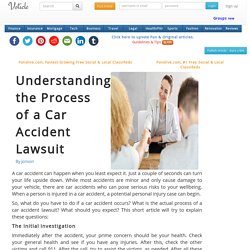 Just a couple of seconds can turn your life upside down. While most accidents are minor and only cause damage to your vehicle, there are car accidents who can pose serious risks to your wellbeing. The Complete Guide To Prove Your Wrongful Death Lawsuit. Wrongful death claims are usually initiated against defendants who allegedly caused another person's death. 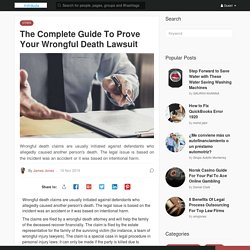 The legal issue is based on the incident was an accident or it was based on intentional harm. The claims are filed by a wrongful death attorney and will help the family of the deceased recover financially. Understanding The Different Types of Class Actions Lawsuit. Top Reasons Why Motorcyclists Need an Attorney After a Crash. The number of registered motorcyclists has steadily increased over the past few decades to more than 1.1 million registered in Florida alone.

With so many motorcyclists on the road, it’s easy to understand why motorcycle accidents involving fatalities and injuries are also on the rise. In 2013, there were 481 fatal motorcycle crashes and more than 8,000 motorcycle crashes involving injuries. Our highly skilled accident attorneys at Osborne & Associates Law Firm, P.A. have helped numerous victims recover full compensation for both personal and professional consequences. We develop a comprehensive legal strategy to identify all at-fault parties and pursue all avenues of recovery to ensure that you are able to achieve a successful resolution to your case. Florida is known for its sunny weather and pleasant temperatures that contributes to the large number of motorcyclists in the state. Tips for Hiring a Reliable Product Liability Attorney. An attorney is an important factor in regard to legal issues. Preparing for court cases and preventing lawsuits is their job. An attorney has an understanding of the legal system that can benefit business owners and people.

They can create contracts for business to business relations, up and coming businesses, and you personally from being sued. Know Common Types of Medical Malpractice. The principle of sovereign immunity limits the amount of damages victims are able to recover from the state and its agencies and subdivisions. State agencies and subdivisions include the executive, legislative and judicial branches of government, state universities, counties, municipalities and certain corporations. This is important for cases involving medical malpractice. In Florida, sovereign immunity caps damage amounts at $200,000 per person and $300,000 per claim if you were injured by a physician who is employed by the state.

Our Florida medical malpractice attorneys understand the state law, and always take the time to communicate with you throughout each stage of the process and provide you with the education and resources you need to make sound decisions for your case. Get Best Legal Help After Brain Injury. Traumatic brain injuries often have debilitating and long-term side effects that severely impact your professional, personal and financial stability. According to the Centers for Disease Control (CDC), in 2010 alone, there were more than two million traumatic brain injuries and 30% of all injury deaths are linked to traumatic brain injury. At Osborne & Francis Law Firm PLLC, our injury attorneys understand the emotional and physical pain associated with brain injuries and work hard to ease some of the burdens and pressures that go along with pursuing legal action.

Our primary goal is to investigate and litigate your case to the fullest and help you achieve a positive resolution that allows you to move on in with your life in a better position. Traumatic brain injuries result from bumps or blows to the head that may or may not penetrate the skin and or skull. Contact Best Bicycle Lawyers to Deal with Any Kind of Bicycle injury. Bicycle accidents often lead to tragic and long-term consequences for victims. Former NFL player Merril Hoge claims weed killer Roundup caused cancer.

Former NFL player Merril Hoge was first diagnosed with non-Hodgkin’s lymphoma in 2003. Former NFL player Merril Hoge claims weed killer Roundup caused cancer. Woman files suit against Lowcountry hotel, employee. Important Steps To Take After Suffering A Slip & Fall Accident. Top Reasons You Need Our Experienced Civil Rights Lawyers. Despite widespread media attention and public outcry, civil rights violations are still all too common. The Most Common Type of Claim in Car Accident Lawsuit. Car accidents are an unfortunate reality. Understand The Complexities of a Commercial Boat or Cruise Ship Injury Claim. Woman suing North Charleston Embassy Suites claims employee raped her. A woman who says she was raped by an employee of Embassy Suites in North Charleston is expected to announce a lawsuit Monday against the hotel, its parent company (Hilton Worldwide) and the man she claims sexually assaulted her.

Lawsuit filed against SC hotel over alleged rape. Claims You Can Make After A Motorcycle Accident. Know Different Types of Product Liability Lawsuits. Accidents happen all the time. Sometimes it's the person’s fault or sometimes it isn’t. If it isn’t your fault, the law recognizes many of your rights and offers many legal procedures to recompense for what you’ve lost. It’s called liability, and this legal suit extends to various areas of injury recompensation which can be pursued in the court of law. When Are Birth Injuries Considered Medical Malpractice? What Do You Need to Know Before Filing a Personal Injury Lawsuit? If you have been injured due to someone else’s negligence, then you may be able to file suit against them and receive compensation for financial expenses and pain and suffering resulting from the injury. There are several basics, but important, point that you should know about personal injury lawsuits in Florida before you file.

If, after considering the following points you decide you will file, or if you don’t know whether or not you should, then it is in your best interest to consult an experienced personal injury attorney. Family of Cocoa homicide victim sues apartment complex over safety concerns. Police called murder suspect Joshua Taylor a career criminal, charging him with kidnapping and killing Tashaun Jackson, a mother of 4 Tim Shortt, FLORIDA TODAY The family of a 31-year-old mother of four who police said was kidnapped and killed by a man she was set to testify against, filed a lawsuit against the apartment complex where the woman lived. The family’s lawyers said the owners of Clear Pond Estates — the government-subsidized housing where Tashaun Jackson lived with her family — failed to adequately supply security despite repeated warnings from Jackson and Cocoa police that Joshua Taylor was living on the property.

‘IF IT WAS YOUR CHILD, YOU WOULD WANT SOMEONE TO COME FORWARD:’ FAMILY OF KEVIN POPE SEEKS ANSWERS. 'Come forward': Mother of boy fatally struck by tractor-trailer seeks help identifying driver. Mom's message for driver of truck that killed her 10-year-old son: 'I just want to know what happened to my baby' - Orlando Sentinel.