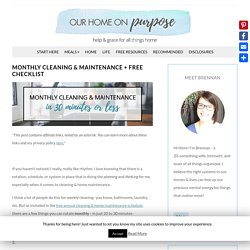 You can learn more about these links and my privacy policy here.* If you haven’t noticed, I really, really like rhythm. I love knowing that there is a rotation, schedule, or system in place that is doing the planning and thinking for me, especially when it comes to cleaning & home maintenance. An Adventurer's Guide to the Northern Strongholds. Lost Lore of the NorthElves of Felegoth The Gweriamir"Listen, and you shall hear the tale of strife and friendship between Elves and warves, circling back over the long years, in the shape of a single emerald necklace. 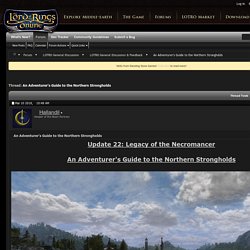 It was a necklace of ancient make, wrought by the dwarves of old. Fine and gleaming was the gold, encrusted with five hundred perfect glittering emeralds, maybe more. Perfect, wondrous, radiant. A gift the emerald necklace was, given freely in times of good will. But friendship, far more fragile than any metal or gem, did not endure. Dragons"Many are the enemies of dwarves: goblins, Wargs, spiders, Orcs. 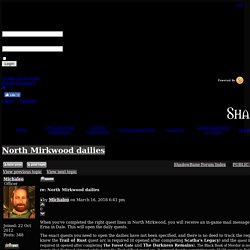 This will open the daily quests. The exact quests you need to open the dailies have not been specified, and there is no deed to track the requirements.

Issues with the 64-bit client. Lotro Throne of the Dread Terror - Boss #2 - Mumaks T2 Challenge. Runekeeper. Hunter. Showthread. Hello everyone,Now that the raid has been out a good amount of time and many kins have cleared the raid T2C I thought it was time to release this guide as it doesn’t take me long to do and I hope saves people countless hours wiping. 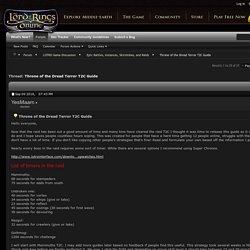 This was created for people that have a hard time getting 12 people online, struggle with the hardest fights or simply don’t have a lot of time. Showthread. I wanna add this info for LOTRO Plugin Compendium install locations at mac os. i searched whole net but get only 1 answer and i wanna share this valuable info here it is For anyone wondering, if you're a Mac user, the files go into a "hidden" directory, and then you must create a plugin folder within this yourself.

To access the correct directory, exit to the Finder. From the "GO" dropdown menu in the top left, select "Go to folder ... " In the popup box, type " ~/Library/Application Support/ " without the quote marks. (The tilde is extremely important because this gives you access to Apples hidden library files.)In Application support, look for a folder called com.turbine.lotroclient and open it. This is where you need to create a new folder called "Plugins" (without the quotes). 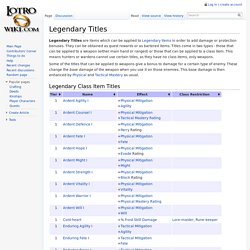 These change the base damage of the weapon when you use it on those enemies. Legendary Class Item Titles. Quickbeam (Derndingle) - Lotro-Wiki.com. This page is about Quickbeam After the Battle of the Hornburg . 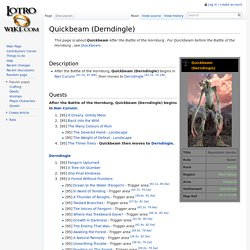 For Quickbeam before the Battle of the Hornburg , see Quickbeam . Description. Imbuement and You - Rare Breed - Arkenstone - LOTRO - Kinship Hosting - Gamer Launch. LAST UPDATED May 18, 7:45pm (U16.1) DO NOT MAKE ANY RASH DECISIONS WITH YOUR LIs BASED ON THE INFO BELOW; THIS IS MERELY WHERE THE SYSTEM IS AT IN ITS CURRENT FORM. 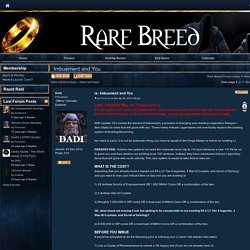 THERE MAY BE MINOR UPDATES TO COME. With Update 16.0 comes the advent of Imbuement, a process of changing your existing Legendary Weapon / Item (static) to ones that will grow with you. These newly Imbued Legendaries will eventually replace the existing system of leveling/deconning. 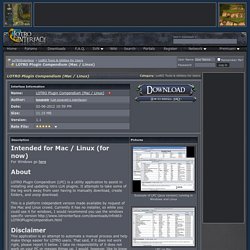 I am currently using the "native" MAC OS X Client (beta) download from Turbine for playing LotRo (which i dowloaded last week and works great). My Computer is running OS X 10.8.2 (Mountain Lion). I would love to run some plugins and was thrilled to see that you have a Mac version of your LotroInterface Compendium, i downloaded it, installed it no problem. MAC CLIENT Compendium Question not installing plugins properly. - LoTROInterface. Quote: I'm now retired after 30+ years as a Unix System Administrator at a major Ivy League University with a major Computer Science department. 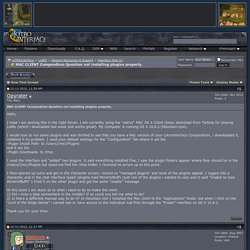 Mac Client. Eric Albrecht. Lotro - Ruined City tier II - Zub & Tuk. Lotro Guides - View Forum - DoME - Dwarrowdelf - LOTRO - Kinship Hosting - Gamer Launch. Rotation ideas. As far as I remember (haven't played for a few months either, break is still going.. :P): ST: Burning Embers -> Wizard's Fire -> (one of Sticky Gourd, Ancient Craft, Wizard's Fire, Staff Sweep, Tar, Light of the Rising Dawn, Staff Strike). Flight to the Lonely Mountain - Tier II - Lord of the Ring Online (NEW) Kin Transfer list - Middle Earth Elites in LOTRO on Dwarrowdelf. Good day, Between November 1st and November 8th I worked on a list of Kinships, their Kin Leaders, and which server they plan on moving to. There are 129 kinships and 2 kinless players on the list. A link to the Spreadsheet is at the bottom of this post. Below is a summary of the spreadsheet: Kin Transfer List - Google Sheets. Untitled. 19 Real Life Examples of An Extroverted Introvert So You Don't Get Confused.

Jupiter Submarine. What if you released a submarine into Jupiter's atmosphere? Would it eventually reach a point where it would float? Could it navigate? Nope! Jupiter's pressure, density, and temperature curves are different from ours. At the point in Jupiter's atmosphere where the density is high enough for a submarine to float, the pressure is high enough to crush the submarine,[1]Which makes it more dense. and the temperature is high enough to melt it.[2]Which makes it harder to drive. The Hobbit: The Battle of the Five Armies - Billy Boyd Music Video - "The Last Goodbye" (2014) HD. LOTRO Essence Planner. LOTRO Trait Tree Planner. Lotro Tools. Helm's Deep template builder /! \ We are still working on the german translation, coming soon™ ! Aim Contribution. Oddly Developed Types. "It all depends on how you define 'alive.'" Charm: A weird sense of humor Adaptability: Superior Planning: Strategic Survival Preparations: Needs development Weapons Skill: Needs development Intelligence: Unmeasurable using current tests Warm Fuzzies: Iceman Leadership: Needs development INTPs have the best survival plans of all types.

Unfortunately, they won't act on them until it's too late. Try to look at the your present state of unpreparedness as an opportunity rather than as a disaster. True, you didn't do anything about your elegantly designed schemes, and now the world has ended. Grand Piano - "February Blues" IMG_0087.MOV. Mostrando IMG_0087.MOV. Guide to LotRO's Draigoch's Lair Raid. There is one fantasy staple that never gets old: good old-fashioned dragon-slaying. In some games, dragons are a dime a dozen, and you kill dozens of them shortly after you are done killing rats in the sewers, skeletons in the graveyard and goblins in the ruins. In the Lord of the Rings Online, there are currently only two, and of those two, Draigoch is the more archetypical fire-breathing death-tyrant. The quest chain to slay Draigoch first becomes available at level 75.

Deed Location Maps. Sari-surma Tier II Guide. I haven't seen a Sari-surma guide on the boards yet, so I thought I'd put one together. The Compassion Of Christ. I love Holy Week. Ever since my oldest was two, I have read the resurrection story to my children every day of holy week, and every year I learn more than they do. The student teaches the teacher, again. This year as we were reading about the Garden of Gethsemane, Darcy asked me why Jesus was so scared. Im Sexy and I Know it (Lotro Style) Deeping Wall Raid Tutorial Dwarrowdelf. Transcript from first deeping wall raid class - DoME - Dwarrowdelf - LOTRO - Kinship Hosting - Gamer Launch. LOTRO Fully Imbued Legendary Item Live.