Mortimer Adler, Great Books, Philosophy, Great Ideas. Threshold knowledge. Threshold knowledge is a term in the study of higher education used to describe "core concepts that once understood, transform perception of a given subject"[1] or one can describe individual threshold concepts. 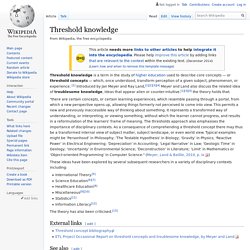 The theory was introduced by Jan Meyer and Ray Land, who have published frequently on it.[1][2][3][4] Meyer and Land also discuss the related idea of troublesome knowledge, ideas that appear alien or counter-intuitive.[1][3][4] These ideas have been explored by several subsequent researchers in a variety of disciplinary contexts.[5][6][7][8][9][10][11] The theory has also been criticised.[12] External links[edit] See also[edit] Eureka effect References[edit] ^ Jump up to: a b c Meyer J H F and Land R 2003 "Threshold Concepts and Troublesome Knowledge – Linkages to Ways of Thinking and Practising" in Improving Student Learning – Ten Years On. The Threshold Concept. Great books. The great books are those books that are thought to constitute an essential foundation in the literature of Western culture. 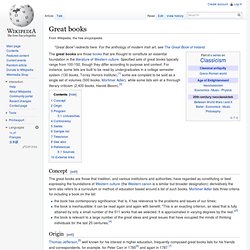 Specified sets of great books typically range from 100-150, though they differ according to purpose and context. For instance, some lists are built to be read by undergraduates in a college semester system (130 books, Torrey Honors Institute),[1] some are compiled to be sold as a single set of volumes (500 books, Mortimer Adler), while some lists aim at a thorough literary criticism (2,400 books, Harold Bloom).[2] 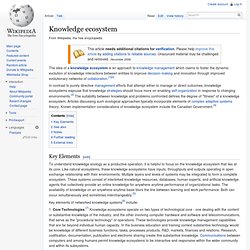 Compiled by Mortimer Adler, an American philosopher, under the guidance of Robert Hutchins, president of the University of Chicago, the volumes were billed as a collection of the 102 great ideas of the western canon. The term “syntopicon” was coined specifically for this undertaking, meaning “a collection of topics.”[1] The volumes catalogued what Adler and his team deemed to be the fundamental ideas contained in the works of the Great Books of the Western World, which stretched chronologically from Homer to Freud.

The Syntopicon lists, under each idea, where every occurrence of the concept can be located in the collection’s famous works. History[edit] The Syntopicon was created to set the Great Books collection apart from previously published sets (such as Harvard Classics). Purpose[edit] Popular Quotes. 103 Ideas. Great Conversation. The Great Conversation is a characterization of references and allusions made by authors in the Western canon to the works of their predecessors. 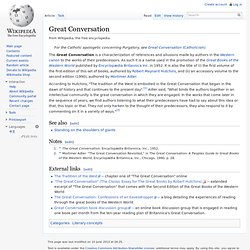 As such it is a name used in the promotion of the Great Books of the Western World published by Encyclopædia Britannica Inc. in 1952. It is also the title of (i) the first volume of the first edition of this set of books, authored by Robert Maynard Hutchins, and (ii) an accessory volume to the second edition (1990), authored by Mortimer Adler. According to Hutchins, "The tradition of the West is embodied in the Great Conversation that began in the dawn of history and that continues to the present day".[1] Adler said, "What binds the authors together in an intellectual community is the great conversation in which they are engaged. In the works that come later in the sequence of years, we find authors listening to what their predecessors have had to say about this idea or that, this topic or that. The_Great_Conversation.pdf. Open Mind Common Sense.

Open Mind Common Sense (OMCS) is an artificial intelligence project based at the Massachusetts Institute of Technology (MIT) Media Lab whose goal is to build and utilize a large commonsense knowledge base from the contributions of many thousands of people across the Web. 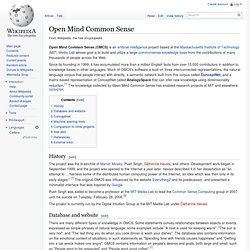 Since its founding in 1999, it has accumulated more than a million English facts from over 15,000 contributors in addition to knowledge bases in other languages. Much of OMCS's software is built on three interconnected representations: the natural language corpus that people interact with directly, a semantic network built from this corpus called ConceptNet, and a matrix-based representation of ConceptNet called AnalogySpace that can infer new knowledge using dimensionality reduction.[1] The knowledge collected by Open Mind Common Sense has enabled research projects at MIT and elsewhere.[2][3][4][5][6] History[edit] The project was the brainchild of Marvin Minsky, Push Singh, Catherine Havasi, and others.

Knowledge base. A knowledge base (KB) is a technology used to store complex structured and unstructured information used by a computer system. 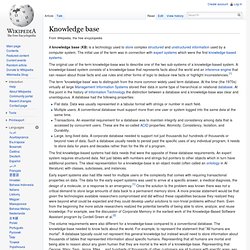 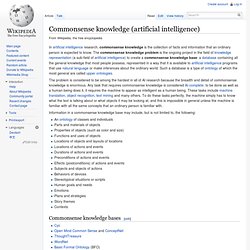 Any task that requires commonsense knowledge is considered AI-complete: to be done as well as a human being does it, it requires the machine to appear as intelligent as a human being. These tasks include machine translation, object recognition, text mining and many others. To do these tasks perfectly, the machine simply has to know what the text is talking about or what objects it may be looking at, and this is impossible in general unless the machine is familiar with all the same concepts that an ordinary person is familiar with.

Information in a commonsense knowledge base may include, but is not limited to, the following: Lenat, Douglas; Guha, R. Category:Knowledge bases. Stumble Upon Topics.

Culturomics. Most common words in English. The Reading Teachers Book of Lists claims that the first 25 words make up about one-third of all printed material in English, and that the first 100 make up about one-half of all written material.[4] Source: [1] Parts of speech Nouns timepersonyearwaydaythingmanworldlifehandpartchildeyewomanplaceworkweekcasepointgovernmentcompanynumbergroupproblemfact Verbs behavedosaygetmakegoknowtakeseecomethinklookwantgiveusefindtellaskworkseemfeeltryleavecall Adjectives goodnewfirstlastlonggreatlittleownotheroldrightbighighdifferentsmalllargenextearlyyoungimportantfewpublicbadsameable Prepositions toofinforonwithatbyfromupaboutintooverafterbeneathunderabove Others theandathatIitnotheasyouthisbuthistheyhersheoranwillmyoneallwouldtheretheir Source: [1] See also References. 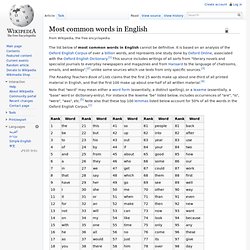