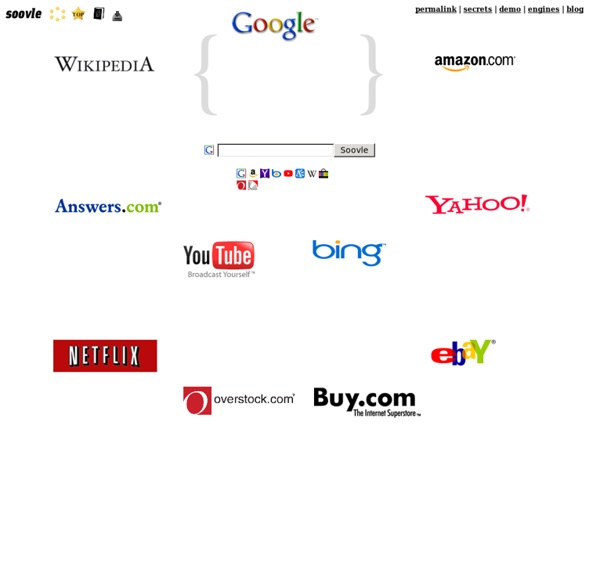 At the upper right of the screen ( to the right of the secrets box ) is a link titled "engines". Once clicked, the Engine Selector will open, a mini-diagram of Soovle is at the top and a collection of search engine options is below. To change your Soovle engines - Drag any engine icon onto a position in the mini-diagram of Soovle. Your Soovle page will immediately reflect your changes. Know of an engine we should include? Let us know: Contact us

Resources So you don’t have any idea where to start, right? Guess what—neither did I. I was clueless. Literally. When I started JeffBullas.com a few years ago, I had no idea how to start a blog. I could hardly spell HTML, let alone build a successful website and blog. The Flight From Conversation At home, families sit together, texting and reading e-mail. At work executives text during board meetings. We text (and shop and go on Facebook) during classes and when we’re on dates. Knowledge base A knowledge base (KB) is a technology used to store complex structured and unstructured information used by a computer system. The initial use of the term was in connection with expert systems which were the first knowledge-based systems. The original use of the term knowledge-base was to describe one of the two sub-systems of a knowledge-based system.

50 Top Tools for Social Media Monitoring, Analytics, and Management Use these platforms to manage, measure, and analyze your social media marketing initiatives. To succeed in today’s connected world, you need to build a community around your company, brand, and products. Over the last decade, social media monitoring has become a primary form of business intelligence, used to identify, predict, and respond to consumer behavior. Listening to what your customers, competitors, critics, and supporters are saying about you is key to getting great results from your social media campaigns. The Sexperience 1000 Welcome to The Sexperience 1000, an interactive journey through the sexual experiences and preferences of one thousand British individuals. What’s the favourite sexual position of iPhone users in the North? Do country music lovers over 55 prefer to do it in the dark?

Free Link Building Tools from BuzzStream Use our free tools to find link opportunities, conduct link research or automate link building tasks. Free Tools Email Research ToolEnter a name, company and website and this tool will generate Google searches to find their email address. Photo Inspiration Who doesn’t love baby photography, One of the most challenging and time consuming type of photography. It is easily one of the hardest kinds just because of the sheer amount of unexpected drama with the kids. It is also one of the most popular kind of photography too.

Open Mind Common Sense Open Mind Common Sense (OMCS) is an artificial intelligence project based at the Massachusetts Institute of Technology (MIT) Media Lab whose goal is to build and utilize a large commonsense knowledge base from the contributions of many thousands of people across the Web. Since its founding in 1999, it has accumulated more than a million English facts from over 15,000 contributors in addition to knowledge bases in other languages. Much of OMCS's software is built on three interconnected representations: the natural language corpus that people interact with directly, a semantic network built from this corpus called ConceptNet, and a matrix-based representation of ConceptNet called AnalogySpace that can infer new knowledge using dimensionality reduction.[1] The knowledge collected by Open Mind Common Sense has enabled research projects at MIT and elsewhere.[2][3][4][5][6]