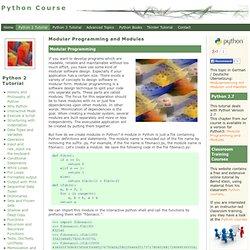 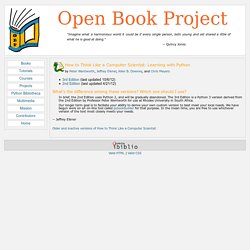 Downey, and Chris Meyers 3rd Edition (last updated 10/6/12)2nd Edition (last updated 4/21/12) What's the difference among these versions? Which one should I use? In brief, the 2nd Edition uses Python 2, and will be gradually abandoned. BeginnersGuide. The Python Tutorial — Python v2.7.1 documentation. Python is an easy to learn, powerful programming language.

It has efficient high-level data structures and a simple but effective approach to object-oriented programming. Python’s elegant syntax and dynamic typing, together with its interpreted nature, make it an ideal language for scripting and rapid application development in many areas on most platforms. The Python interpreter and the extensive standard library are freely available in source or binary form for all major platforms from the Python Web site, and may be freely distributed. The same site also contains distributions of and pointers to many free third party Python modules, programs and tools, and additional documentation. Style Guide for Python Code. Code should be written in a way that does not disadvantage other implementations of Python (PyPy, Jython, IronPython, Cython, Psyco, and such).For example, do not rely on CPython's efficient implementation of in-place string concatenation for statements in the form a += b or a = a + b. 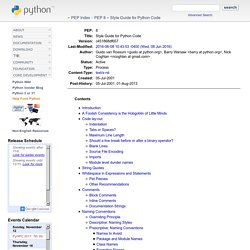 This optimization is fragile even in CPython (it only works for some types) and isn't present at all in implementations that don't use refcounting. In performance sensitive parts of the library, the ''.join() form should be used instead. This will ensure that concatenation occurs in linear time across various implementations.Comparisons to singletons like None should always be done with is or is not, never the equality operators.Also, beware of writing if x when you really mean if x is not None -- e.g. when testing whether a variable or argument that defaults to None was set to some other value.

The other value might have a type (such as a container) that could be false in a boolean context! BeginnersGuide/Programmers. Please Note Because this is a Wiki page, users can edit it. 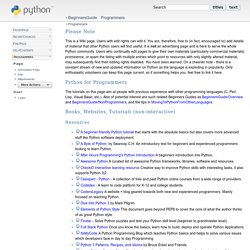 You are therefore free to add details of material that other Python users will find useful. It is not an advertising page, and is here to serve the whole Python community. Users who continually edit pages to give their own materials (particularly commercial materials) prominence, or spam the listing with multiple entries which point to resources with only slightly altered material, may therefore find their accounts are disabled.

The Mouse Vs. The Python - Nightly (Build 20110507043313) Python beginner's mistakes. Every Python programmer had to learn the language at one time, and started out as a beginner. 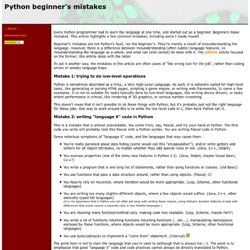 Beginners make mistakes. This article highlights a few common mistakes, including some I made myself. Beginner's mistakes are not Python's fault, nor the beginner's. They're merely a result of misunderstanding the language. However, there is a difference between misunderstanding (often subtle) language features, vs misunderstanding the language as a whole, and what can (and cannot) be done with it. To put it another way, the mistakes in this article are often cases of "the wrong tool for the job", rather than coding errors or sneaky language traps.

Welcome! Are you completely new to programming? Python exercises to hone your skills. Python Bibliotheca. Invent Your Own Computer Games with Python - Learn how to program with a free ebook programming tutorial. Python Programming Language – Official Website. Django. About web.py (web.py) PythonStyleGuide - soc - Style guide for Python code contributed to Melange - Project Hosting on Google Code. Melange follows the Google Python Style Guide; this document describes only those respects in which Melange's style differs from what is laid out in that document. 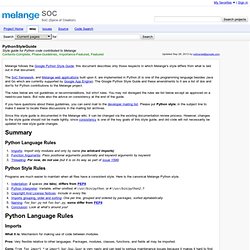 The SoC framework, and Melange web applications built upon it, are implemented in Python (it is one of the programming language besides Java and Go which are currently supported by Google App Engine). The Google Python Style Guide and these amendments to it are a list of dos and don'ts for Python contributions to the Melange project. The rules below are not guidelines or recommendations, but strict rules. You may not disregard the rules we list below except as approved on a need-to-use basis. But note also the advice on consistency at the end of the guide. If you have questions about these guidelines, you can send mail to the developer mailing list. Since this style guide is documented in the Melange wiki, it can be changed via the existing documentation review process. The Hitchhikers Guide to Python! — pythonguide 0.0.1 documentation. Greetings, Earthling! 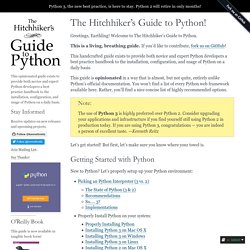 Welcome to The Hitchhiker’s Guide to Python. This is a living, breathing guide. If you’d like to contribute, fork us on GitHub!