15 Mythical Hotels From Around The Globe Everybody Should Stay In At Least Once. The Scale of the Universe 2. Facebook. The Evolution of the Web. Why Buy Local? [Infographic] The Internet of Things [INFOGRAPHIC] When we think of being connected to the Internet, our minds immediately shift to our computers, phones, and most recently tablets. 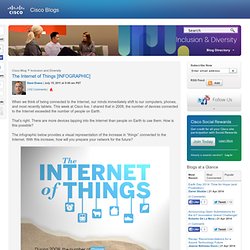 This week at Cisco live, I shared that in 2008, the number of devices connected to the Internet exceeded the number of people on Earth. That’s right. There are more devices tapping into the Internet than people on Earth to use them. How is this possible? The infographic below provides a visual representation of the increase in “things” connected to the Internet. Tags: IBSG, infographic, internet, network. Infographic: A Cheat Sheet For Seeing What Veggies And Fruits Are In Season. If you’re the sort of person who buys cherries in the winter and asparagus in the fall, then throws a fit because they taste like dirt, these posters are for you. 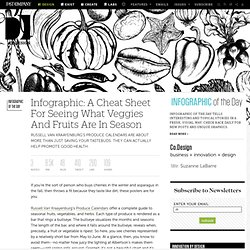 Russell Van Kraayenburg’s Produce Calendars offer a complete guide to seasonal fruits, vegetables, and herbs. Each type of produce is rendered as a bar that rings a bullseye. The bullseye visualizes the months and seasons. The length of the bar, and where it falls around the bullseye, reveals when, precisely, a fruit or vegetable is ripest. So here, you see cherries represented by a relatively short bar from May to June. Click to zoom. For Van Kraayenburg, a self-described creative director, photographer, and foodie, the calendars are about more than just saving your tastebuds. Produce Calendars are available for fruits, vegetables, and herbs. [Image: Nikiparonak/Shutterstock] Facebook. The Talk: Nonblack Version. There is much talk about “the talk.” “Sean O’Reilly was 16 when his mother gave him the talk that most black parents give their teenage sons,” Denisa R.

. (10a) Avoid concentrations of blacks not all known to you personally. Incredible Things That Happen Every 60 Seconds On The Internet. Videos. Seminars About Long-term Thinking. Upcoming Seminars Sep 16 Drew Endy “The iGEM Revolution” The Long Now Foundation's monthly Seminars were started in 02003 to build a compelling body of ideas about long-term thinking; to help nudge civilization toward our goal of making long-term thinking automatic and common instead of difficult and rare. Featured Seminar The Starships ARE Coming There is an appalling distance between here and the countless planets we’re discovering around stars other than our Sun.

Related:  CoP - Using Astronomy as an aid to teaching STEM   -  Useful   -  astronomy, outer space and our solar system   -  Reference   -  Astronomy   -  שיעורי מדעים   -  The Scale of the Universe 2   -  The Evolution of the Web   -  The Internet of Things [INFOGRAPHIC]   -  Incredible Things That Happen Every 60 Seconds On The Internet   -  BuyAerogel.com   -  The Trouble with the Electoral College   -  Family tree of the Greek gods - Wikipedia, the free encyclopedia - StumbleUpon   -  What Are The Odds?   -  Just Cool & Unique   -  Unique Stuff   -  Unique products   -  Unique   -  unique events   -  How to Turn a Sphere Inside Out - YouTube   -  Wheres My Cellphone?   -  Bento Laptop Tablet Hybrid by René Woo-Ram Lee » Yanko Design   -  Sphere Inside out Part - II - YouTube   -  Light Light's Sublime Levitating Lamps - Core77   -  Facebook Failures - List of Facebook Fails and Mistakes | WordStream   -  How Do We Prepare Students For Jobs That Don't Exist Yet? | Edudemic   -  20 Awesome Products And Design Ideas - Ned Hardy | Ned Hardy   -  The Deglon Meeting Knife Set Beautiful Life   -  The 50 Most Beautiful Natural Waterfalls in the World   -  Awesome Nature Photos Of Incredible Places - 39 Examples   -  Website Templates   -  What Successful People Do With The First Hour Of Their Work Day   -  10 Most Beautiful Natural Swimming Pools in the World | Globe Traveling   -  Top 10 World’s Strangest Natural Wonders –   -  Top 10 Most Beautiful Nature Spots Around the Austria | Austria Tourism   -  Education   -  Enterprise