Resources. Twitter/twurl: OAuth-enabled curl for the Twitter API. Images by Circos in Publications: Newspapers, Magazines, Books and Journals. Report on Business makes the connection between companies and perks in their January 2011 issue. Is your resume ready? What about your visualization? Stephens report on a phenomenon by which a cell accumulates a large number of rearrangements in a single catastrophic event. This phenomenon, which they call , can be seen in at least 2%–3% of all cancers and in about 25% of bone cancers. In a collaboration with Derek Baccus from Pearson Science , Martin Krzywinski designed the cover illustration for the 3rd edition of iGenetics by Peter Russell. 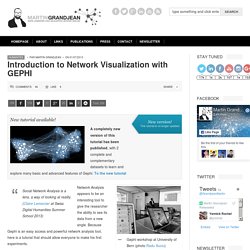 A completely new version of this tutorial has been published, with 2 complete and complementary datasets to learn and explore many basic and advanced features of Gephi: To the new tutorial Gephi workshop at University of Bern (photo Radu Suciu) Social Network Analysis is a lens, a way of looking at reality. (Claire Lemercier at Swiss Digital Humanities Summer School 2013) Network Analysis appears to be an interesting tool to give the researcher the ability to see its data from a new angle. I propose below, after a short introduction about the basis of SNA and some examples which shows the potential of this tool, a transcript of tutorial given during a workshop of the first Digital Humanities summer school in Switzerland (June 28. 2013), and kept up to date. 1. A network consists of two components : a list of the actors composing the network, and a list of the relations (the interactions between actors). 2. 3.

Top 5 Free Data Visualization Tools Online. Large data sets are meaningless in their raw form as they do not provide much analytical value. 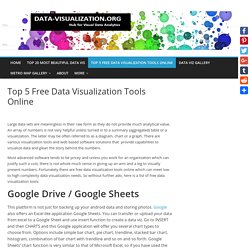 An array of numbers is not very helpful unless turned in to a summary (aggregated) table or a visualization. The latter may be often referred to as a diagram, chart or a graph. There are various visualization tools and web based software solutions that provide capabilities to visualize data and glean the story behind the numbers. Most advanced software tends to be pricey and unless you work for an organization which can justify such a cost, there is not whole much sense in giving up an arm and a leg to visually present numbers. Neo4j, the world's leading graph database - Neo4j Graph Database. Online GeoEditor - collaborative creating and editing of geographical data. DataBasic.io. Data transformation and analysis tool. Tad - A Desktop Viewer App for Tabular Data. Science of Science (Sci2) Tool Manual - Sci2 Manual - Confluence. Sci2 Tool : A Tool for Science of Science Research and Practice.

Colorgorical. To generate a palette with n colors, just enter the number of colors you want and click Generate. 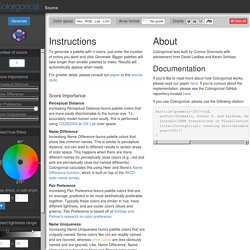 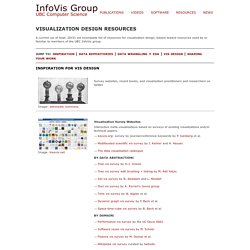