A collection to support my study of Information Visualisation (INFO 246) online through San Jose State University.

Traveling Back in Time With Colorful Isochrone Maps - Atlas Obscura. In the early 1880s, the mapmaker Francis Galton began to imagine a series of ideal trips. 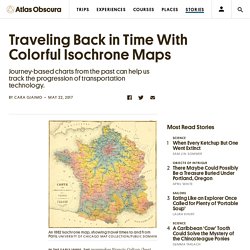 Each started in his home city, London, but from there they ranged far afield—to Greenland, or Morocco, or the distant reaches of the Pacific. By figuring out how long each of these trips would take, and drawing lines grouping those destinations that could be reached in an equal amount of time, he figured he could provide a service to travelers, sailors, and those who simply wanted to know how long it would take their mail to get someplace. Galton’s calculations presumed smooth sailing all the way: “I assume the seasons to be favorable, that immunity has been obtained from political obstructions, and that friends on the spot have made preparations to avoid delay,” he wrote.

For each trip, he consulted steamer timetables, estimated package-shipping times, and personal correspondence from friends at the Post Office. The above 1889 map, by J.G. Heather — Profile. Trend and variation. 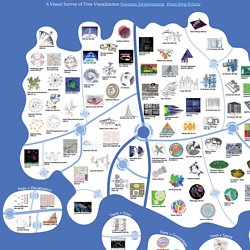 The Do's And Don'ts Of Infographic Design. Advertisement Today, too many websites are still inaccessible. 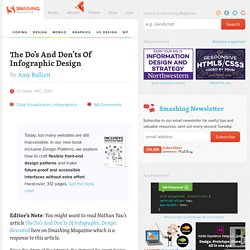 In our new book Inclusive Design Patterns, we explore how to craft flexible front-end design patterns and make future-proof and accessible interfaces without extra effort. The 100 best infographics. Every picture tells a story, as they say, but sometimes it takes a clever combination of words and pictures to tell a story quickly, concisely and in an entertaining fashion.

The best infographics may look like they were simple to create in Photoshop, but designing an effective piece of data visualization is usually anything but. There are several great tools to create infographics, but to these examples of infographics from around the web will show you how you can take it a step further and add a bit of style and personality to your data. A few of these are now several years out of date but they can still provide some inspiration for those of you looking to create an infographic from scratch. Some are funny, some more serious, and all are inspiring examples of the art.

If Rogue One has put you in the mood to immediately watch the original Star Wars, hold your horses just one second. 13 of the Year’s Best Infographics. Gareth Cook first became aware of the singular power of a good infographic back when he was working as a science reporter for The Boston Globe in the early aughts. 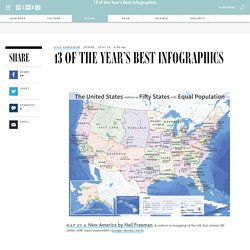 “I realized that in some cases, no matter what I did with words, I absolutely could not explain some things without visual help,” he says. Whose ratings should you trust? IMDB, Rotten Tomatoes, Metacritic, or Fandango? Should you watch a movie? 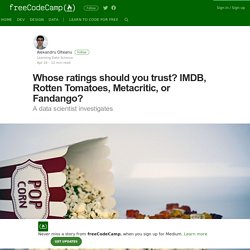 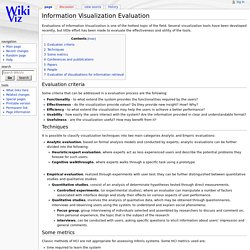 Several visualization tools have been developed recently, but little effort has been made to evaluate the effectiveness and utility of the tools. Evaluation criteria. Evaluating Information - Citing and Writing Help - SJSU Research Guides at San José State University Library. The five keys to a great infographic. Great infographics don't happen by accident; rather a carefully crafted infographic displays various attributes that contribute to its overall success. 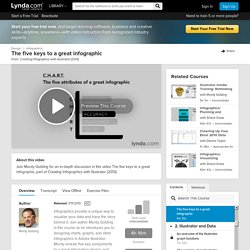 I've come up with a simple way to summarize these attributes into what I call CHART: the five keys to a great infographic. The first key is Contrast; Contrast in a design creates tension and displays a clear distinction or difference offering no ambiguity. In graphic design, Contrast can be used to draw a viewer's attention to a specific area. Trends. Ngram Viewer.

Sketchnotes: Tools and tactics for visual notetaking. About the presenter: Matt Miller has taught for more than a decade, integrating technology to engage students and create unique learning experiences. 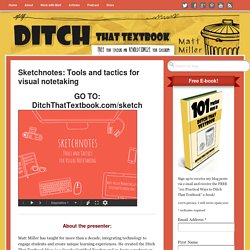 He created the Ditch That Textbook blog, is a Google Certified Teacher and co-hosts a podcast on the BAM Radio Network. The Surprising History of the Infographic. Tools - Misleading axes on graphs. The purpose of a publication-stage data visualization is to tell a story. 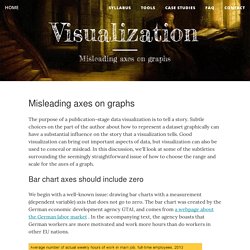 Subtle choices on the part of the author about how to represent a dataset graphically can have a substantial influence on the story that a visualization tells. Good visualization can bring out important aspects of data, but visualization can also be used to conceal or mislead. In this discussion, we'll look at some of the subtleties surrounding the seemingly straightforward issue of how to choose the range and scale for the axes of a graph. Bar chart axes should include zero. Tools - Proportional Ink. Hans Rosling: The best stats you've ever seen. The Joy of Stats. SAS enables visually impaired to 'visualize' data. 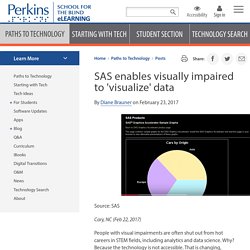