US election 2020: A really simple guide 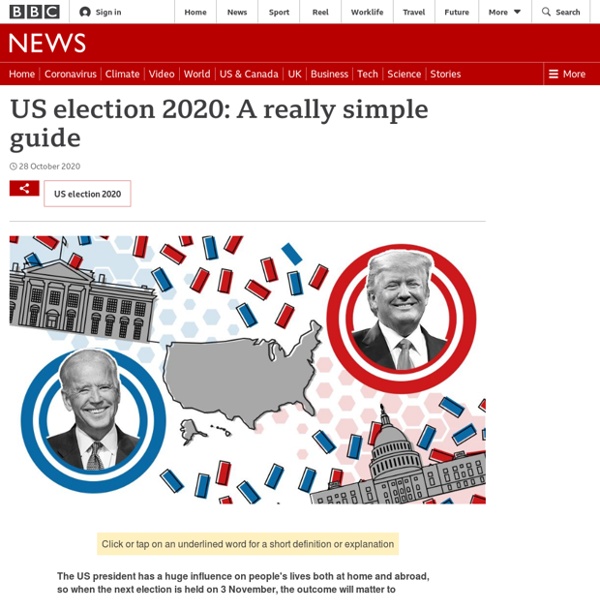 U.S. Elections: the Year of the Unknowns – Speakeasy News It’s already been an unusual election year in the U.S.A., with the later Democratic primaries cancelled because of Covid and delayed party conventions held online. As the virus continues to progress in the U.S.A., what are the possible consequences for the election? The parties are continuing as near to normal as they can. The focus, as usual, is on the presidential election, but 3 November is also the date when all of the seats in the House of Representatives will be up for re-election, and one third of the Senate. The Republican ticket for the presidential election is the incumbent President Donald Trump and Vice-President Mike Pence.

President Donald Trump's Economic Plan Republican Donald John Trump is the 45th president of the United States, defeating Democratic nominee Hillary Clinton on Nov. 8, 2016. His first term is from 2017 to 2021. In the 2020 election, he will run against Democrat Joe Biden. Trump's economic plan focuses on "making America great again." Presidential debate: Trump and Biden trade insults in chaotic debate Media playback is unsupported on your device President Donald Trump and his challenger Joe Biden have fiercely clashed in one of the most chaotic and bitter White House debates in years. Mr Trump frequently interrupted, prompting Mr Biden to tell him to "shut up" as the two fought over the pandemic, healthcare and the economy. The US president was challenged over white supremacist support and refused to condemn a specific far-right group.

US election 2020 : All you need to know about the presidential race Image copyright Getty Images The race for the White House has begun in earnest, and the outcome of the 2020 US general election will have an impact around the world. So what stage are we at now and how do you win the presidency? This will be a presidential campaign like no other. Just as the Democratic contest was winding down, and former Vice-President Joe Biden was strengthening his grip on his party's nomination, the US election was derailed by the outbreak of the novel coronavirus. Test Your Election I.Q. Two of the past three U.S. presidents—Donald Trump and George W. Bush—were elected to their position without winning the popular vote. How does this happen? It has to do with the Electoral College. Each state has a number of electors equal to its total number of senators and representatives.

Who Is Donald Trump? Donald Trump is the 45th and current President of the United States; he took office on January 20, 2017. Previously, he was a real estate mogul and a former reality TV star. Trump's 2020 campaign strategy: psychological warfare (Opinion) Four years later, here we are again. President Trump, once more, baselessly claims the entire electoral system is "rigged" to favor his adversary, now Joe Biden, and won't commit to abiding by the outcome. It's still not how democracy works. But now we know better. Trump has little interest in or respect for the democratic process. US election 2020: How do you become US president? Image copyright Getty Images People in the US state of Iowa are about to start the process of finding a Democratic candidate to take on President Trump in the 2020 US presidential race. This small agricultural state in the US Midwest is the first one to cast votes and will be followed by the other 49 and the US territories. The winner that emerges will do battle for the White House in the presidential election in November.

US Presidential Election, 7-B1 This theme page presents lesson plans and materials to learn about the US presidential election of 2020 in years 6-9 and above (A2-B1) of the Swedish Compulsory School. Related pages: U.S. Government, The USA Now, The Presidential Inauguration 2021 Last edited Jan 6th, 2021 2020 Presidential Candidate Positions on 67 Issues - 2020 Presidential Election Site - ProCon.org Privacy Preference Center When you visit any website, it may store or retrieve information on your browser, mostly in the form of cookies. This information might be about you, your preferences or your device and is mostly used to make the site work as you expect it to.

What’s at Stake CLINTON favors raising the federal minimum wage to $12 an hour and providing more tax breaks for working families. She wants the wealthiest Americans to pay higher taxes. She also wants the government to spend more on infrastructure projects like roads and bridges to provide jobs and grow the economy. TRUMP says the U.S. needs to renegotiate its trade deals to make them more beneficial to American companies and workers. Presidential debate: Trump and Biden's claims fact-checked Image copyright AFP President Trump and his Democratic challenger Joe Biden have gone head-to-head in the first of three televised debates before the US election in November. During a heated 90 minutes, the nominees clashed over everything from the state of the economy to the handling of the coronavirus pandemic. Reality Check has unpicked some of their claims. Trump: "We built the greatest economy in history" Verdict: That's not right - there have been times in US history when the economy was stronger.