Who Is Donald Trump? 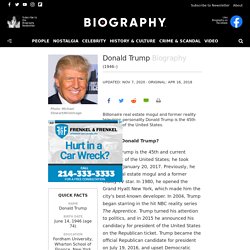 Donald Trump is the 45th and current President of the United States; he took office on January 20, 2017. Previously, he was a real estate mogul and a former reality TV star. Joe Biden - The United States' 47th Vice President. Www.franglish.fr. How to Elect a President – Speakeasy News. U.S. Elections: the Year of the Unknowns – Speakeasy News. US election 2020: A really simple guide. Donald Trump vs Joe Biden: How do the Republican and Democratic policies compare in the US election race? What’s at Stake. CLINTON favors raising the federal minimum wage to $12 an hour and providing more tax breaks for working families. 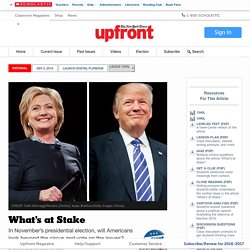 She wants the wealthiest Americans to pay higher taxes. She also wants the government to spend more on infrastructure projects like roads and bridges to provide jobs and grow the economy. TRUMP says the U.S. needs to renegotiate its trade deals to make them more beneficial to American companies and workers. He’s also proposed a 45 percent tariff on goods coming into the U.S. from China. To encourage economic growth, he wants to lower the corporate tax rate and simplify the tax code for everyone. CLINTON supports broad immigration reform and, like President Obama, says she favors protections for certain groups of undocumented immigrants, including young people brought here illegally as children. TRUMP promises to build a wall along the U.S.

American Politics: Did you know …? Before Watching 1. 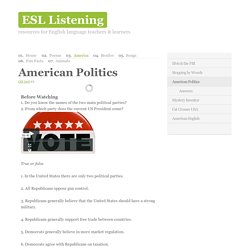 Do you know the names of the two main political parties? 2. CE Clinton. 20160919health. Eval. EDpuzzle. The 2016 US presidential election activities. Hillary Clinton Biography for Kids « Hillary Diane Rodham was born in Chicago, Illinois on October 26, 1947. 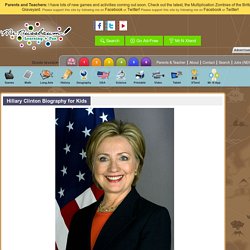 She has two brothers, Hugh and Anthony. She went to public schools where she participated in swimming, baseball, and other sports. She was also a Brownie and Girl Scout. In high school, Hillary was a member of the National Honor Society. She was president of her senior class at Wellesley College where she majored in political science and was the first student ever asked to deliver its commencement address. 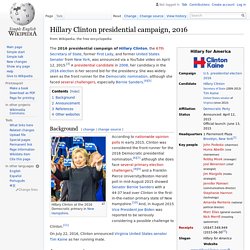 She was widely seen as the front runner for the Democratic nomination, although she faced several challengers, especially Bernie Sanders.[4][5] Background[change | change source] On July 22, 2016, Clinton announced Virginia United States senator Tim Kaine as her running mate. Announcement[change | change source] The Clinton campaign had planned for a delayed announcement, possibly as late as July,[12][13][14] but later determined the need to advance that timeline due to publicity surrounding Clinton's use of a private email server while Secretary of State.[15]

Donald Trump presidential campaign, 2016. Campaign slogan Trump declared, "We are going to make our country great again" and he made a commitment to become the "greatest jobs president. 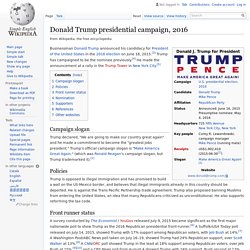 " Trump's official campaign slogan is "Make America Great Again. " (which was Ronald Reagan's campaign slogan, but Trump trademarked it).[2] Policies Trump is opposed to illegal immigration and has promised to build a wall on the US-Mexico border, and believes that illegal immigrants already in this country should be deported. Front runner status. Cartoon: Don't Go to Europe! - The English Blog. This cartoon by Ben Jennnings from The Guardian connects two stories to do with the US presidential election: Donald Trump's warning that Britain and Europe are 'not safe places' after the Brussels terror attacks, and the petition demanding that the organisers of this summer's Republican Convention allow people to carry legal weapons. 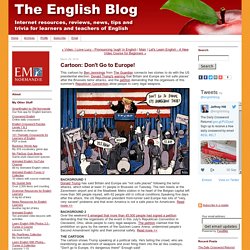 BACKGROUND 1Donald Trump has said Britain and Europe are "not safe places" following the terror attacks, which killed at least 31 people in Brussels on Tuesday. The twin blasts at the Zaventeem airport and at the Maalbeek Metro station in he heart of the Belgian capital left more than 360 people injured, with 62 people still in critical conditions.Speaking five days after the attack, the US Republican president front-runner said Europe has lots of "very, very severe" problems and that even America is not a safe place for Americans. Four Short Biographical Videos Of Donald Trump & Hillary Clinton. Here are two relatively accessible and objective video biographies of Donald Trump and Hillary Clinton. 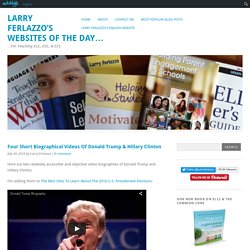 I’m adding them to The Best Sites To Learn About The 2016 U.S. Presidential Elections: Related English Language Learners Using Screencast-o-matic For Folktale Presentations This year, our School District loosened our Internet filter, so there are now many more options for tools we can use (though, of course, our antiquated tech does create some barriers). November 6, 2013. What Trump's hand gestures say about him. US election 2016: Six reasons it will make history. Image copyright Reuters. 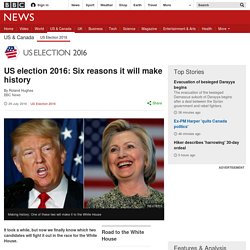 Where Donald Trump and Hillary Clinton stand on 2016's key issues. It has been described as the most polarising election in decades, a stark choice between two visions of America. 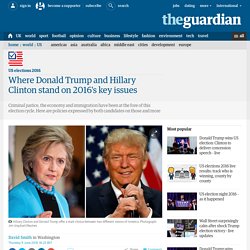