Cat 653. Debunking the myths of OCD - Natascha M. Santos. OCD: The War Inside. Extreme OCD Camp Episode 1 BBC documentary 2013 journey to the American wilderness. Living With #OCD. Celine's depression: 'My selfies tell a story' Image copyright CELINE BALLANTINE Celine is a 19-year-old law student at the University of Hull who has suffered with depression and anxiety for much of her life. 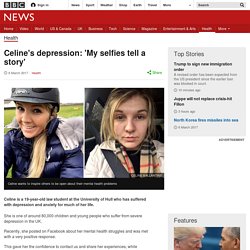 She is one of around 80,000 children and young people who suffer from severe depression in the UK. Recently, she posted on Facebook about her mental health struggles and was met with a very positive response. This gave her the confidence to contact us and share her experiences, while receiving treatment at Cygnet Hospital Harrogate. More than anything, she wants to inspire others to be open about their mental health. This is her story. Image copyright Celine Ballantine "Since as long as I can remember I have felt unhappy, unmotivated overall unsuccessful, with dark thoughts lingering in my mind.

"People say we cannot see mental health, but I don't agree. "It can be seen in the hair that I couldn't be bothered to brush anymore, in the lack of make-up, because - what was the point? Emetophobia: 'I'm terrified of vomiting - chicken scares me' Image copyright Hannah Ellis Nobody likes being sick. 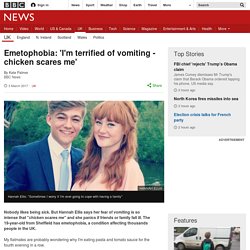 But Hannah Ellis says her fear of vomiting is so intense that "chicken scares me" and she panics if friends or family fall ill. The 19-year-old from Sheffield has emetophobia, a condition affecting thousands people in the UK. My flatmates are probably wondering why I'm eating pasta and tomato sauce for the fourth evening in a row. Is positive thinking making us depressed? Spider phobia brain 'processes unconscious fear' Image copyright Science Photo Library Showing arachnopohobes images of spiders so briefly they remain unaware of them could help them overcome their fear, US researchers suggest. 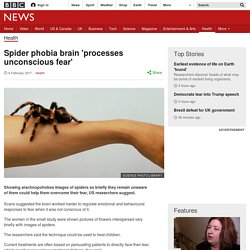 Scans suggested the brain worked harder to regulate emotional and behavioural responses to fear when it was not conscious of it. The women in the small study were shown pictures of flowers interspersed very briefly with images of spiders. The researchers said the technique could be used to treat children. Current treatments are often based on persuading patients to directly face their fear, which could cause serious emotional distress, they said. A phobia is an irrational fear of an object, place, situation, feeling or animal.

Phobias are more pronounced than fears, and can become overwhelming and affect day-to-day life. They are particularly common in women. It is possible to find happiness again after major depression. Living through depression can feel like being in an emotional prison, but there is a way out, at least for some. 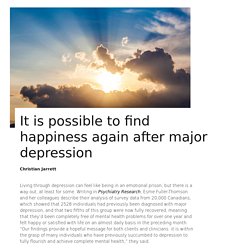 Writing in Psychiatry Research, Esme Fuller-Thomson and her colleagues describe their analysis of survey data from 20,000 Canadians, which showed that 2528 individuals had previously been diagnosed with major depression, and that two fifths of this group were now fully recovered, meaning that they’d been completely free of mental health problems for over one year and felt happy or satisfied with life on an almost daily basis in the preceding month. “Our findings provide a hopeful message for both clients and clinicians: it is within the grasp of many individuals who have previously succumbed to depression to fully flourish and achieve complete mental health,” they said.

A fear of feeling guilty might be key to some forms of OCD. There's increasing recognition that our vulnerability to mental health problems isn’t just about how much we are prone to certain emotions such as anxiety and low mood, but also how we relate to those emotions. 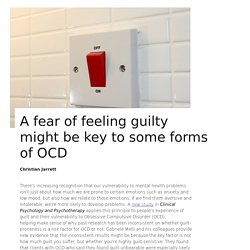 If we find them aversive and intolerable, we’re more likely to develop problems. The Truth about Depression BBC Full Documentary 2013 YouTube. Conquering depression. The mindful way through depression: Zindel Segal at TEDxUTSC. Analysis of a five year old boy Freud. Systematic Desensitisation - Capafons. Shiny ‘app-y people: Treating depression from your smart phone. Earlier this year I wrote about some research I was involved in, which reduced aggressive behaviour in young offenders by manipulating their perception of ambiguous facial expressions. 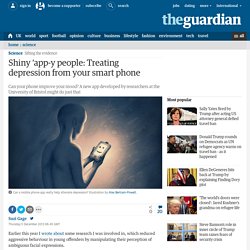 A similar principle is behind a new app, called HappyPlace, which has been developed as an attempt to combat low mood (full disclosure: this is the same group as the above research, and so conducted in the lab where I work). Past research has suggested that depression may be partly caused or maintained by biased ways of thinking, particularly around the processing of ambiguous faces. Consider walking down the street, and seeing a friend. Hanging out with virtual reality spiders helps arachnophobes see real spiders as smaller and less scary. A little fear can be a good thing but when it develops into a phobia, it can become debilitating. 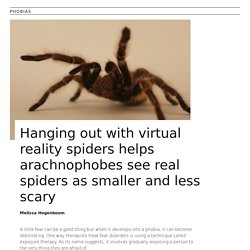 One way therapists treat fear disorders is using a technique called exposure therapy. As its name suggests, it involves gradually exposing a person to the very thing they are afraid of. The problem is that in the comfort of a therapist's office, recreating the fearful event is not always straightforward. This means patients may not be able to realistically confront what they most fear. Consider recreating a bomb going off in a war zone, confronting a fear of heights, or coming face to face with a large, hairy spider. It is therefore becoming more popular for cognitive psychologists to use virtual reality (VR) both to study and to treat fear disorders.

Previous studies have shown that our brain can easily be tricked in a virtual world, even though we know the world is not real. The researchers say that there were two related changes after the VR exposure.