Is everything you think you know about depression wrong? 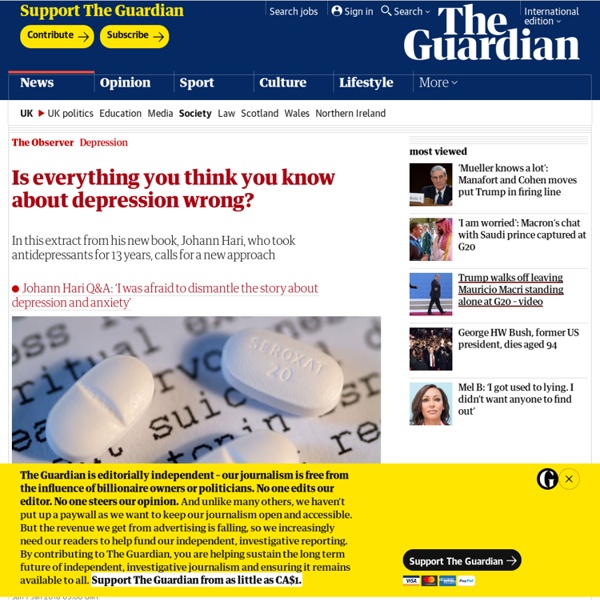 In the 1970s, a truth was accidentally discovered about depression – one that was quickly swept aside, because its implications were too inconvenient, and too explosive. American psychiatrists had produced a book that would lay out, in detail, all the symptoms of different mental illnesses, so they could be identified and treated in the same way across the United States. It was called the Diagnostic and Statistical Manual. In the latest edition, they laid out nine symptoms that a patient has to show to be diagnosed with depression – like, for example, decreased interest in pleasure or persistent low mood. For a doctor to conclude you were depressed, you had to show five of these symptoms over several weeks. The manual was sent out to doctors across the US and they began to use it to diagnose people. The authors conferred, and they decided that there would be a special clause added to the list of symptoms of depression. I was a teenager when I swallowed my first antidepressant.

If elephants aren’t persons yet, could they be one day? Have you ever stood in a field full of cows? It’s obvious that they’re aware of one another, but in a minimal kind of way. They tend to stay loosely clumped together as they graze, and they don’t deliberately knock into other members of the herd. Shouting gets their attention, but it tends to elicit a flickering inspection at most, which subsides into cud-munching indifference when they realise you represent neither a threat nor a treat. A Neural Code That Predicts Behavior Greater activation of neurons on one side of the superior colliculus versus the other signals the detection of a relevant event. Credit: James Herman, Ph.D., NEI Scientists at the National Eye Institute (NEI) have found that neurons in the superior colliculus, an ancient midbrain structure found in all vertebrates, are key players in allowing us to detect visual objects and events. This structure doesn’t help us recognize what the specific object or event is; instead, it’s the part of the brain that decides something is there at all. By comparing brain activity recorded from the right and left superior colliculi at the same time, the researchers were able to predict whether an animal was seeing an event.

The Love Books of Ovid: The Art of Love: Book I IF there be anyone among you who is ignorant of the art of loving, let him read this poem and, having read it and acquired the knowledge it contains, let him address himself to Love. By art the swift ships are propelled with sail and oar; there is art in driving the fleet chariots, and Love should by art be guided. Automedon was a skilled charioteer and knew how to handle the flowing reins; Tiphys was the pilot of the good ship Argo. I have been appointed by Venus as tutor to tender Love.

Astrocytes Show Unexpected Role in Brain Plasticity Astrocytes are the main cell type in the brain producing Chrdl1. Through a technique called fluorescence in situ hybridization, the RNA of different proteins is tagged with fluorescent labels. In the image, Chrdl1 is in red, astrocytes in cyan (teal) and neurons in dark blue, in the upper layers of the mouse visual cortex. undefined Abstract Theories of choice from economics and philosophy suggest information requirements for good choices. In view of these requirements, we can see why current menus lead toward regrettable and isolating choices.

Key Molecule Responsible for Learning and Memory Discovered Unlike old dogs, old adults can indeed learn new tricks thanks to a protein molecule called netrin. Netrin is known to help set up the healthy nervous system in an infant's developing brain by directing brain cells to make appropriate connections with other brain cells. New research conducted by scientists at The Neuro has found that netrin in the adult brain can make neural connections stronger, which is crucial not only for learning new tricks but also for maintaining a good memory. "It was a mystery why neurons would continue making netrin in the adult brain after all the connections had already been made in infancy," says Timothy Kennedy, a researcher at The Neuro and senior author of the paper published in the Oct. 2 edition of Cell Reports. "We found that when a neuron is active, the activity causes it to release netrin. The netrin acts to strengthen the connection between the neuron and a neighbouring neuron at the activated synaptic junction.

Buddhist Principles Buddha laid down the eightfold path for his followers and enunciated that by following this path, they could put an end to their suffering. This eightfold path, as laid down by Buddha, helps an individual attain the state of Nirvana by freeing him from attachments and delusions and thereby helping him understand the innate truth of all things. This path, therefore, helps a person with his ethical and mental growth and development. Buddha laid great emphasis on implementing the teachings since a higher level or existence can be attained only by putting translating thoughts into actions. The eightfold path suggested by Buddha involves adherence to: 1. Study of advanced Buddhist meditators suggests inducing near-death experiences can be learned and perfected Near-death experiences are profound psychological events that typically occur in people close to actual or perceived death. New research has examined some Buddhist meditation practitioners who can willfully induce these experiences. The study was published in Mindfulness. “The practice of using meditation to gain a better understanding of death is longstanding, particularly in Buddhism where ancient texts exist that aim to help spiritual practitioners prepare for, or gain insight into, the process of dying,” said study author William Van Gordon of the University of Derby and

Autocracy: Rules for Survival “Thank you, my friends. Thank you. Thank you. Sleep Deprivation Effective as an Anti-Depressant for Nearly Half of Depressed Patients Sleep deprivation – typically administered in controlled, inpatient settings – rapidly reduces symptoms of depression in roughly half of depression patients, according the first meta-analysis on the subject in nearly 30 years, from researchers at the Perelman School of Medicine at the University of Pennsylvania. Partial sleep deprivation (sleep for three to four hours followed by forced wakefulness for 20-21 hours) was equally as effective as total sleep deprivation (being deprived of sleep for 36 hours), and medication did not appear to significantly influence these results. The results are published today in the Journal of Clinical Psychiatry.

How a TV Sitcom Triggered the Downfall of Western Civilization I want to discuss a popular TV show my wife and I have been binge-watching on Netflix. It’s the story of a family man, a man of science, a genius who fell in with the wrong crowd. He slowly descends into madness and desperation, lead by his own egotism. With one mishap after another, he becomes a monster. I’m talking, of course, about Friends and its tragic hero, Ross Geller. You may see it as a comedy, but I cannot laugh with you.

Navigating our Thoughts: Fundamental Principles of Thinking It is one of the most fundamental questions in neuroscience: How do humans think? Until recently, we seemed far from a conclusive answer. However, scientists from the Max-Planck-Institute for Human Cognitive and Brain Sciences (MPI CBS) in Leipzig, Germany, have combined the available evidence, in collaboration with Nobel Prize laureate Edvard Moser from the Kavli Institute for Systems Neuroscience in Trondheim, Norway and Peter Gärdenfors from Lund University in Sweden, to paint a new, comprehensive picture in the current issue of the journal Science: Humans think using their brain’s navigation system. When we navigate our environment, two important cell types are active in our brain.