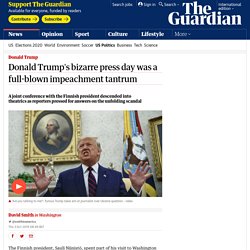 He likely saw Abraham Lincoln’s top hat, memorabilia from Barack Obama’s election campaign and reminders of other leaders who, whatever their flaws, strove for a more perfect union. Then he ran into Donald Trump. Not once, but twice, Niinistö had to wear a so-this-is-perfectly-normal expression in public as the US president ranted and raved during two question and answer sessions with reporters, playing an even more extreme version of himself (not that the original was middle of the road).

Impeachment, it seems, has got under Trump’s skin like nothing else. Over the past week his tone has become more frantic, frenzied and apocalyptic. “So *NOW* can we *FINALLY* have a serious national conversation about the psychological condition of the President of the United States?” Then, an unexpected turn. No, not really. Then a reporter got his turn. Both leaders chuckled. 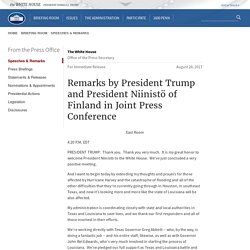 Thank you very much. It is my great honor to welcome President Niinistö to the White House. We've just concluded a very positive meeting. And I want to begin today by extending my thoughts and prayers for those affected by Hurricane Harvey and the catastrophe of flooding and all of the other difficulties that they're currently going through in Houston, in southeast Texas, and now it's looking more and more like the state of Louisiana will be also affected. My administration is coordinating closely with state and local authorities in Texas and Louisiana to save lives, and we thank our first responders and all of those involved in their efforts. We're working directly with Texas Governor Greg Abbott -- who, by the way, is doing a fantastic job -- and his entire staff, likewise, as well as with Governor John Bel Edwards, who's very much involved in starting the process of Louisiana. Tragic times such as these bring out the best in America's character. Video: Niinistön ja Trumpin tiedotustilaisuudesta – Trump: "Rakastamme suomalaisia" - Kotimaa - Uutiset - MTV.fi.

How to survive in Finland? Movie Segments to Assess Grammar Goals: While You Were Sleeping: Reported Speech. This a very funny scene. 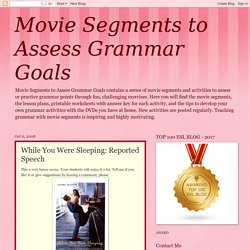 Your students will enjoy it a lot. Tell me if you like it or give suggestions by leaving a comment, please. Before you watch the segment:Talk to a partner about the following situations. Decide what you would do: 1) What would you do if you saw someone falling on the subway tracks? Refugee crisis: eight life stories from Budapest's Keleti station. ‘I want to go back to my country and teach people’ Majd Haaj Hassan is as quick with a Shakespeare quotation, reeling off Sonnet XVIII in a grubby refugee camp, as he is with a political analysis of Syria’s woes. 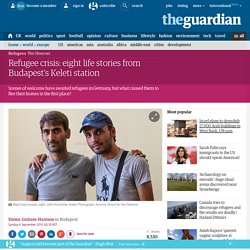 Like many of those who could afford the steep smugglers’ fees to cross the first borders into Europe, the English literature student, who is still determined to graduate from some university, somewhere, comes from a wealthy family. “We had six houses, two cars, 1,000 hectares of land with olive trees,” he says. “For five years we had patience, but now the situation is different.” He is travelling with his brother, Walid, who operated a concrete-mixer truck in Idlib, Walid’s wife and two young children and several other friends and relatives. The two specific triggers for their departure were a battle between Jabhat al-Nusra and Isis that levelled two houses in their small town, and a drawing his six-year-old niece made one day when he brought her a pack of crayons and some paper. True or False? Yle tackles Finland’s top ten complaints about asylum seekers.

More than half of all people seeking asylum in Finland are turned down and forced to leave. 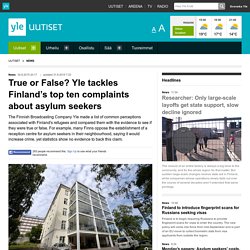 The average time it takes to process an asylum application is about six months, a period that can be extended if there are a large number of asylum seekers, but additional resources have been promised to help speed up the process. Since the end of July, the Finnish Immigration Service has granted asylum to 40 percent of applicants (946 people). Of those that were allowed to stay, some 500 were granted asylum outright and the rest were accepted for their secondary or humanitarian protection or other reasons.

Asylum is granted if a person fears persecution in their home country due to their origin, religion, nationality, membership in a certain social group or political opinions. 1. False. 2. False (in most cases). The amount of financial support granted to asylum seekers is therefore smaller than the social allowance and many other benefits granted to Finnish residents. The Speech that Made Obama President. Fear Factor Taste Test: Foreigners eating Finnish Black 'salty' Licorice Salmiakki in Finland.