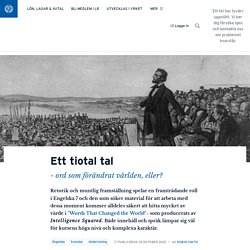 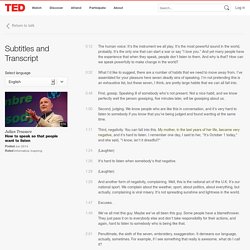 "And yet many people have the experiencethat when they speak, people don't listen to them.And why is that? How can we speak powerfully to make change in the world? What I'd like to suggest,there are a number of habits that we need to move away from.I've assembled for your pleasure here seven deadly sins of speaking.I'm not pretending this is an exhaustive list,but these seven, I think, are pretty large habits that we can all fall into. First, gossip.Speaking ill of somebody who's not present.Not a nice habit, and we know perfectly wellthe person gossiping, five minutes later, will be gossiping about us. Second, judging.We know people who are like this in conversation,and it's very hard to listen to somebodyif you know that you're being judged and found wanting at the same time. 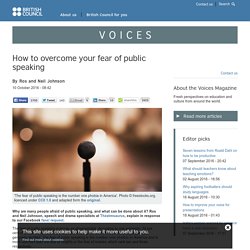 Ros and Neil Johnson, speech and drama specialists at Theatresaurus, explain in response to our Facebook fans' request. The fear of public speaking is known as glossophobia. According to one estimate, 74 per cent of people suffer from various forms of this phobia and ten per cent of people are genuinely terrified. The fear of public speaking is the number one phobia in America and is more common than the fear of heights or the fear of snakes, which rank two and three respectively.

The symptoms of glossophobia Symptoms of glossophobia range from knots in the stomach, sweaty palms, dry mouth, shaky legs and tightness in the throat. Most of these symptoms are due to the increase in adrenaline produced by our bodies because we are experiencing the flight-or-fight reaction. Many famous people have had a fear of public speaking How to help yourself relax and control your breathing Exercise 1 – Learning to relax.

Sentence Stress. How to use rhetoric to get what you want - Camille A. Langston. Aristotle, the student of Plato, taught first in Plato’s Academy and then tutored Alexander the Great, and finally established his Athenian philosophical school the Lyceum. 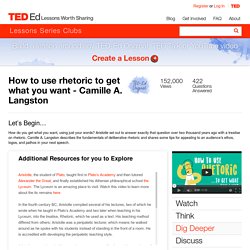 The Lyceum is an amazing place to visit. Watch this video to learn more about the its remains here. In the fourth century BC, Aristotle compiled several of his lectures, two of which he wrote when he taught in Plato’s Academy and two later when teaching in his Lyceum, into the treatise, Rhetoric, which he used as a text. His teaching method differed from others; Aristotle was a peripatetic lecturer, which means he walked around as he spoke with his students instead of standing in the front of a room. He is accredited with developing the peripatetic teaching style.

Aristotle was not born in Athens and was not an orator like the sophists, and one of the most famous orators of the age, Cicero, were. English Club. A video tutorial by TED-Ed Club Members on public speaking…and more. Imagine that you’re a student with a question about public speaking. 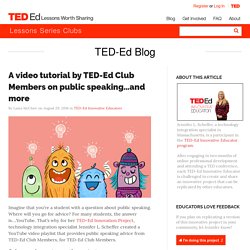 Where will you go for advice? For many students, the answer is…YouTube. That’s why for her TED-Ed Innovation Project, technology integration specialist Jennifer L. Scheffer created a YouTube video playlist that provides public speaking advice from TED-Ed Club Members, for TED-Ed Club Members. Below are her notes on the project: Working with students is the most rewarding part of my job. For this video advice series, I chose to film TED-Ed Club Member Timmy Sullivan, a two-time TEDxYouth@BHS speaker. Watch the student video advice series here. Student feedback: “As a veteran TED-Ed Club Member and TEDxYouth@BHS speaker, I feel privileged to be a part of this project,” says Timmy Sullivan. Get involved with TED-Ed Clubs here. Art credit: Sarah Rebar/TED-Ed Blog.

The Final Speech from The Great Dictator.