Astonished divers come across a massive jellyfish off the coast of England. If there's still a place for giants on this planet, it's in the depths of the seemingly endless ocean. 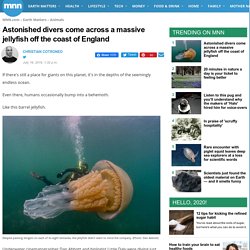 Even there, humans occasionally bump into a behemoth. Like this barrel jellyfish. Despite packing stingers on each of its eight tentacles, the jellyfish didn't seem to mind the company. (Photo: Dan Abbott) Alternative Reality Website. YesterYear Once More. THE OLD CLOCK.GUY CARLTON.I.The old clock croons on the sun-kissed wall — Tick, tock! 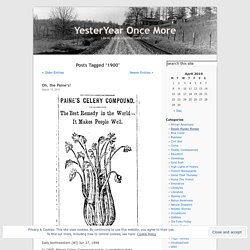 Tick tock! The merry seconds to minutes call: Tick, tock! ‘Tis morn.A maiden sits at the mirror there, And smiles as she combs her golden hair; O, in the light but her face is fair! Tick, tock! Tick, tock! The Oshkosh Northwestern (Oshkosh, Wisconsin) May 16, 1883 THE KITCHEN CLOCK. The Bismarck Tribune (Bismarck, North Dakota) Sep 19, 1884 My Little Bo-PeepBy S.B. Extremophiles 101. 21 Friedrich Nietzsche Quotes That'll Change The Way You Think. Friedrich Nietzsche was an influential German philosopher, widely known for his unconventional ideas about morality and religion. 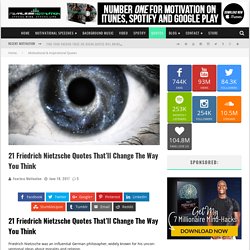 Although his ideas were controversial among the traditional thinkers, he showed people the true nature of life and how individuals can shape their future with independent thought. No matter how young, rich, or happy you are, Friedrich Nietzsche’s philosophy will have a lasting impact on your mind. Here are the 21 greatest Friedrich Nietzsche quotes to change your life for the better: 1. That which does not kill us makes us stronger. If you think life is hard, keep going. 2. To fight terrorism, soldiers have to become ruthless themselves. 3. If you have an incredibly meaningful purpose, you won’t give up no matter how tough it gets. 4. Individuals often know how life works and what the truth really is. 5. People often chase money and things, when all it takes to be happy is music and a good company. 'Planet Earth' Got Zombie Cordyceps Fungus Wrong, Study Suggests.

Video Game Physics - Gif Finder - Find and Share funny animated gifs. Planet Earth II. The House Made of Newspapers. If you go to Rockport someday, in Massachusetts, the United States, take some time to drive down Pigeon Hill Street and look out for a sign that says “Paper House”. 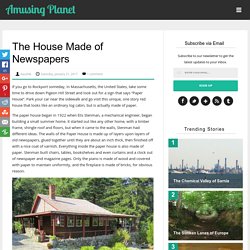 Park your car near the sidewalk and go visit this unique, one story red house that looks like an ordinary log cabin, but is actually made of paper. The paper house began in 1922 when Elis Stenman, a mechanical engineer, began building a small summer home. It started out like any other home, with a timber frame, shingle roof and floors, but when it came to the walls, Stenman had different ideas. The walls of the Paper House is made up of layers upon layers of old newspapers, glued together until they are about an inch thick, then finished off with a nice coat of varnish. Everything inside the paper house is also made of paper. Photo credit: Danielle Walquist Lynch/Flickr No one is sure what motivated Stenman to use newspapers. After Stenman’s death in 1942, the house was turned into a museum. Photo credit: Casey Bisson/Flickr. Sigiriya: The Lion Rock of Sri Lanka. Deep in the middle of Sri Lanka, a massive column of rock juts out from the green tropical forest. 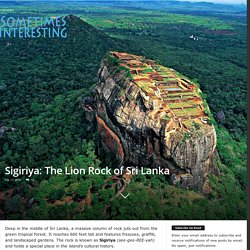 It reaches 660 feet tall and features frescoes, graffiti, and landscaped gardens. The rock is known as Sigiriya (see-gee-REE-yah) and holds a special place in the island’s cultural history. It was established as the stronghold of a rogue king over 1,500 years ago, and today the Sigiriya complex stands as one of the earliest preserved examples of ancient urban planning.

Ultimately the rock was unable to save its king, but it succeeded in preserving ancient Sinhalese culture. Geography Sri Lanka lies just off the southeastern coast of India, a small island about the size of West Virginia (or a tad smaller than Austria or Scotland for European readers).