Lyme and Morgellons, to my current understanding, are very similar with the main difference being technology. 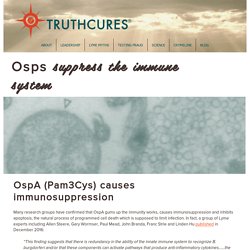 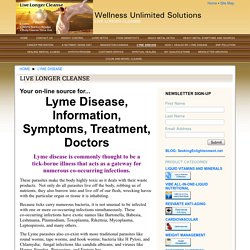 These parasites make the body highly toxic as it deals with their waste products. Not only do all parasites live off the body, robbing us of nutrients, they also burrow into and live off of our flesh, wrecking havoc with the particular organ or tissue it is inhabiting. Because ticks carry numerous bacteria, it is not unusual to be infected with one or more co-occurring infections simultaneously. CDC-SmithKline patents show HLA differences; CDC knows Dearborn is invalid. See the letter to Henry Waxman (July, 2007), below, in which I reveal what is in CDC's staff members' patents regarding our current crooked blood testing for Lyme. 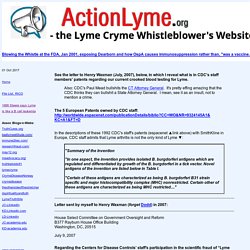 Lyme Disease: The CDC’s Greatest Coverup & What They Don’t Want You To Know. Managing Brain and Nerve Health, Oxidative Stress, and Mitochondria in CFS, FM, and Lyme Disease. Monday, May 23, 2016 By: Linda J. 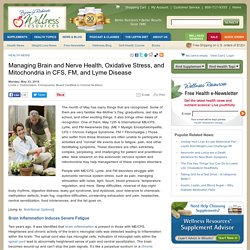 Dobberstein, Chiropractor, Board Certified in Clinical Nutrition The month of May has many things that are recognized. Some of them are very familiar like Mother’s Day, graduations, last day of school, and other exciting things. It also brings other dates of recognition. Lyme Example Video. Borrelia Syndromes in Deep Tissues and in Chronic Infections. Lyme, MSH deficiency and why the HPA axis goes awry - Lyme Disease. I found some very interesting info today after I got back from my appt w/ gastro specialist-turned functional alternative integrated MD with knowledge about LYME. 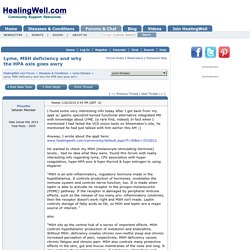 (a rare find, indeed) In fact when I mentioned I had failed the VCS vision tests on Shoemaker's site, he mentioned he had just talked with him earlier this AM ;) Anyway, I wrote about the appt here:www.healingwell.com/community/default.aspx? F=30&m=3310012 He wanted to check my MSH (melanocyte stimulating hormone) levels… had no idea what they were. Advanced 2015 Babesia Care: Profound Testing Defects and Preventing Disability and Death - Public Health Alert. US Government Admits Lyme Disease Is A Bioweapon. Assassins of Lyme Bacteria - Dr. David Jernigan, Hansa Center for Optimum Health. Lyme Spirochetes: My Blood Microscopy. Exploring Lyme Disease Therapies in the 21st Century. Youtube. Elize's Lyme Disease Recovery - Elize St. Charles, Ph.D (Dec 2016) 1976, US Mil, Biology of Parasitic Spirochetes ("permanent brain infections") 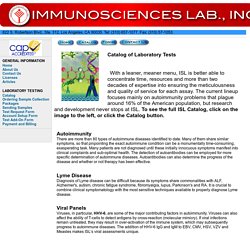 The current lineup focuses mainly on autoimmunity problems that plague around 16% of the American population, but research and development never stops at ISL. To see the full ISL Catalog, click on the image to the left, or click the Catalog button. Autoimmunity There are more than 80 types of autoimmune diseases identified to date. US Govt Admits Lyme Disease a Bioweapon. "SAN ANTONIO (AP) - The $10.6 million Margaret Batts Tobin Laboratory Building will provide a 22,000-square-foot facility to study such diseases as anthrax, tularemia, cholera, lyme disease, desert valley fever and other parasitic and fungal diseases. 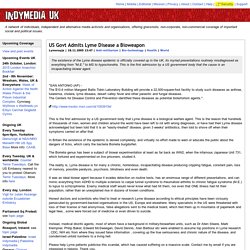 The Centers for Disease Control and Prevention identified these diseases as potential bioterrorism agents. ". This is the first admission by a US government body that Lyme disease is a biological warfare agent. This is the reason that hundreds of thousands of men, women and children around the world have been left to rot with wrong diagnoses, or have had their Lyme disease acknowledged but been told that it is an "easily-treated" disease, given 3 weeks' antibiotics, then told to shove off when their symptoms carried on after that. In Britain the existence of the epidemic is denied completely, and virtually no effort made to warn or educate the public about the dangers of ticks, which carry the bacteria Borrelia burgdorferi. Lisa. ALZHEIMER PLAQUES ARE BIOFILM COMMUNITIES OF BORRELIA. Lyme Disease. Natural News Blogs Lyme Disease Rate 10 Times Higher Than Previously Believed. Arizona Center for Advanced Medicine.

Lyme disease gives rise to the growing school of thought that we can never get rid of all the bugs that do harm; it's about learning to minimize them and live with them. 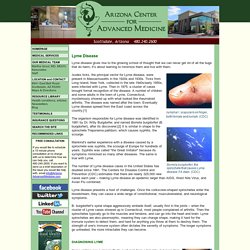 Ixodes ticks, the principal vector for Lyme disease, were present in Massachusetts in the 1920s and 1930s. Ticks from Long Island, New York, collected in the late 1940s/early 1950s, were infected with Lyme. Then in 1975, a cluster of cases brought formal recognition of the disease. LymeBlog - Lyme Disease and Dementia presentation by Dr Alan MacDonald. Lymephotos. Dr. Mercola Interviews Dr. Dietrich Klinghardt about Lyme Disease. Multiple sclerosis is Lyme disease: Anatomy of a cover-up. Perhaps the biggest ongoing medical scandal of the past hundred years is the fact that it has been known since 1911 that Multiple Sclerosis is caused by a bacterium, and that the Big-Pharma-controlled medical-industrial complex covered this up in order to make money selling symptom relievers to MS patients. 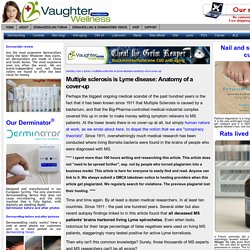 At the lower levels there is no cover-up at all, but simply human nature at work, as we wrote about here, to dispel the notion that we are "conspiracy theorists". Since 1911, overwhelmingly much medical research has been conducted where living Borrelia bacteria were found in the brains of people who were diagnosed with MS. **** I spent more than 100 hours writing and researching this article.

This article does not "need to be spread further", esp. not by people who turned plagiarism into a business model. This article is here for everyone to easily find and read. Time and time again. Then why isn't this common knowledge? Let's examine the reality on the ground. 1. 2. 3. 4. “CDC Lyme Group Violates Law with Preferential Treatment of IDSA,” Advocates Say. Atlanta, GA – WEBWIRE – Tuesday, October 20, 2015. 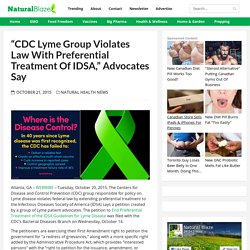 The Centers for Disease and Control Prevention (CDC) group responsible for policy on Lyme disease violates federal law by extending preferential treatment to the Infectious Diseases Society of America (IDSA) says a petition created by a group of Lyme patient advocates. The petition to End Preferential Treatment of the IDSA Guidelines for Lyme Disease was filed with the CDC’s Bacterial Diseases Branch on Wednesday, October 14. The petitioners are exercising their First Amendment right to petition the government for “a redress of grievances,” along with a more specific right added by the Administrative Procedure Act, which provides “interested persons” with the “right to petition for the issuance, amendment, or repeal of a rule.”

A related article, Why is the CDC Allowing a Private Group to Determine Federal Policy on Lyme Disease? According to the article: Lyme Disease’s Staggering New Numbers. No aspect of the bitter and enduring debate about Lyme disease—which I addressed in the magazine a few weeks ago—has been more contentious than the dispute over how many people actually become infected each year. Last year, the Centers for Disease Control and Prevention reported that thirty thousand Americans were diagnosed with Lyme disease, the most commonly reported tick-borne illness in the United States. Today, it bumped the number a bit—to “around” three hundred thousand. The shocking difference is not as bizarre as it might seem. The C.D.C. has always said that the lower number represented solely those diagnoses confirmed by laboratories or reported by physicians; officials acknowledged that the real case load was higher.

But this new number is pretty damn high, and it includes just those who have been diagnosed with the disease.