DOUBLE MOONS OVER DUBAI. (1) The Illusion Only Some Can See. Image result for optical illusion. (1) Shadow Optical Illusions w/ Zach King. 9 famous mirages that play tricks on the eyes. Magnetic hill A magnetic hill or gravity hill has more in common with artificial optical illusions than light-based mirages. 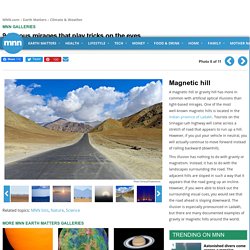 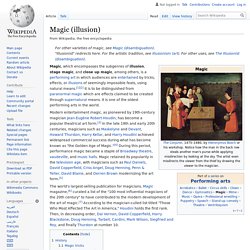 In ancient times, Greeks and Persians had been at war for centuries, and the Persian priests, called magosh in Persian, came to be known as magoi in Greek. Ritual acts of Persian priests came to be known as mageia, and then magika — which eventually came to mean any foreign, unorthodox, or illegitimate ritual practice. To the general public, successful acts of illusion could be perceived as if it were similar to a feat of magic supposed to have been able to be performed by the ancient magoi. The performance of tricks of illusion, or magical illusion, and the apparent workings and effects of such acts have often been referred to as "magic" and particularly as magic tricks.

Opinions vary among magicians on how to categorize a given effect, but a number of categories have been developed. Many of the principles of stage magic are old. Magic is often described according to various specialties or genres. How real magic happens when the brain sees hidden things. The Amazing Johnathan pretends to cut his arm with a big knife. 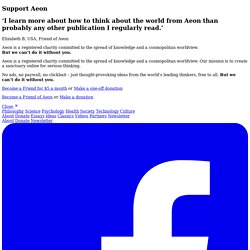 ‘What you are about to see,’ he says, ‘is just a trick.’ He only scratches the surface, but you can already see some blood. ‘It is stage blood. It is riding on the surface of my arm, it is not penetrating my arm, that would be real, this is an illusion.’ And then, all of a sudden, he exclaims: ‘This is real!’ 1 of these 3 Illusions Will Make You Question Your Eyesight. Opitcal (or visual) illusions have a way of captivating us and shaking up our reality. 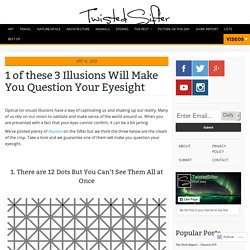 Many of us rely on our vision to validate and make sense of the world around us. When you are presented with a fact that your eyes cannot confirm, it can be a bit jarring. We’ve posted plenty of illusions on the Sifter but we think the three below are the cream of the crop. Take a look and we guarantee one of them will make you question your eyesight. 1. Created by Jacques Ninio An optical illusion from 2000 by Jacques Ninio entitled Ninio’s Extinction Illusion, there are 12 black dots at the intersections of this image but most people can’t see them all due to our poor periphery vision. “When the white disks in a scintillating grid are reduced in size, and outlined in black, they tend to disappear. 2. Illusions: How Our Brain Can Trick Us.

It feels like we have direct access to reality but, in order to produce that feeling, our brain is stitching together all the different information from our senses and filling in the gaps using its best guess as to what is out there in the world. 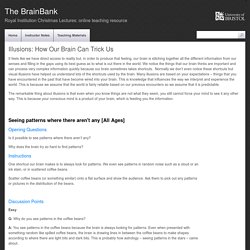 We notice the things that our brain thinks are important and can process very complex information quickly because our brain sometimes takes shortcuts. Normally we don’t even notice these shortcuts but visual illusions have helped us understand lots of the shortcuts used by the brain. Your Eyes are Playing Tricks on You, All of the Horizontal Blue Lines are Straight.

In this modern interpretation of the classic ‘Cafe Wall Illusion‘ our mind tricks us into thinking the horizontal blue lines are curved and bending. 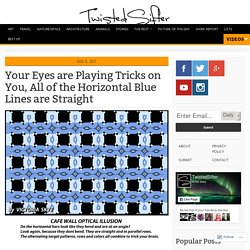 The illusion was made by professional magician and illusion artist Victoria Skye. According to Skye, the key to the illusion are the black and white diamond ‘targets’ at each intersection. When looking at the lines vertically, one can see that the squares that make up the diamond alternate their position. These alternating targets create the effect. [source] “In my version of the famous Café Wall illusion, I have mixed together both the original Café Wall illusion that was made famous by Richard Gregory – and which showcases the brickwork laid on the wall of a café in Bristol, England – with the work of Akiyoshi Kitaoka, who has developed a number of different versions using the same underlying effect” [source] When you blur the image the effect disappears because you can no longer resolve the tiny white-black interactions.

10 Optical Illusions That Will Blow Your Mind. The Banach–Tarski Paradox. "YOU WON'T BELIEVE YOUR EYES!" - Smarter Every Day 142.