Visuino - Visual Development for Arduino by Mitov Software. Users of the Visuino (Software) must accept these terms of license. 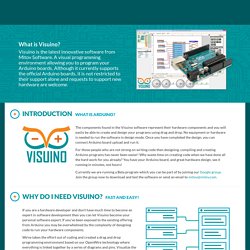 If you refuse to accept the terms of license, you may not use this software, and you have the right to return it within 30 days of the purchase date, and to receive your money back. For your convenience a copy of this license agreement will be stored on your system during the installation. This license grants you the following rights: You have a non-exclusive license to the Software. The Title and all intangible rights to the Software are the property of Mitov Software. You may install and use one copy of the Software per computer assuming only one and the same person will use the Software on all of the computers. You may distribute any application built with Software without any additional royalties beyond your initial license registration fee. Description of the limitations. Free PCB Design Tools. Running Minecraft on a Raspberry Pi. Minecraft is a hugely popular game that runs on PC, Xbox, PlayStation, and even smartphones. 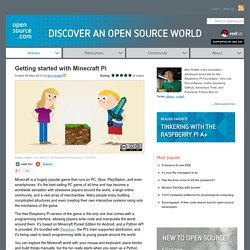 It's the best-selling PC game of all time and has become a worldwide sensation with obsessive players around the world, a large online community, and a vast array of merchandise. Many people enjoy building complicated structures and even creating their own interactive systems using only the mechanics of the game. The free Raspberry Pi version of the game is the only one that comes with a programming interface, allowing players write code and manipulate the world around them. It's based on Minecraft Pocket Edition for Android, and a Python API is provided. It's bundled with Raspbian, the Pi's main supported distribution, and it's being used to teach programming skills to young people around the world. Raspberry Pi e Windows 10. No dia 29 de Abril a Microsoft entrou de cabeça no mundo Maker. 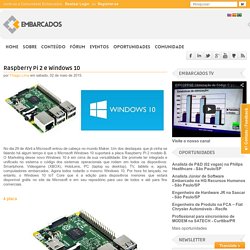 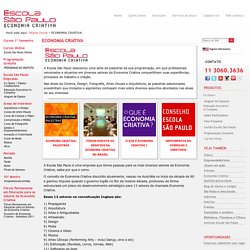 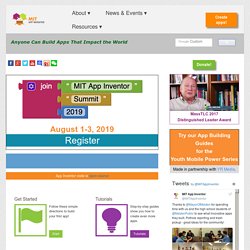 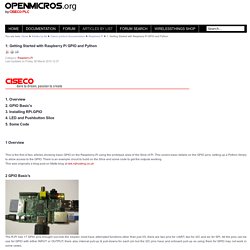 Overview 2. 3. 4. 5. Razzpisampler. Solution The Arduino IDE is available for the Raspberry Pi. 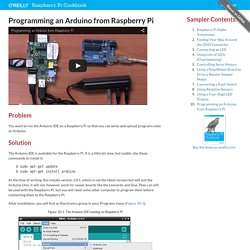 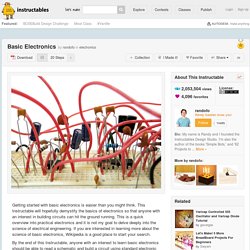 It is using all of the parts that we have just gone over to automatically blink an LED. Any general purpose NPN or PNP transistors should do for the circuit, but should you want to follow along at home, I am using 293904 (NPN) and 2N3906 (PNP) transistors. I learned their pin layouts by looking up their datasheets. For instance, from the datasheet for the 2N3904 transistor, I was quickly able to see that pin 1 was the emitter, pin 2 was the base, and pin 3 was the collector. Aside from the transistors, all of the resistors, capacitors, and LED should be straight-forward to connect. Sign up: Electronics Project Kits for Kids. Introductory Electronics for Kids - Intro. Portable Pi Power: Raspberry Pi to Go. Raspberry Pi computer powered by 18-volt rechargeable drill battery. 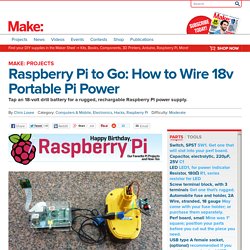 The versatile system-on-a-chip Raspberry Pi board seems to have something for everyone: plenty of ports for display, sound, and USB peripherals; a pin header for relaying inputs and outputs from the physical world; and space for a dedicated camera module, which makes it great platform for all sorts of video experiments. Still, there’s one thing the Raspberry Pi doesn’t come with: a good battery power supply. Powering the board from a wall wart is fine when there’s AC power handy — but a long-lasting and reliable battery source is essential to getting the Pi away from the desk and out in the world, where it belongs. 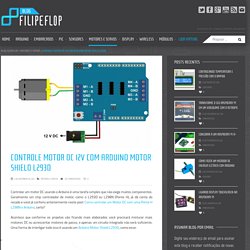 Read the installation instructions below. How To Raise The Next Zuckerberg: 6 Coding Apps For Kids. If you want to give your kid every opportunity to succeed, it’s hard to argue with teaching them to code. Some of the wealthiest and most influential people of our time began programming young, and who wouldn’t want that kind of future for our kids? Yesterday, we reviewed Hopscotch, an iPad app that teaches children the basics of any modern programming language.

However, that’s just one of the many options out there. Coding for Kids: Free Websites That Teach Kids Programming. New Tool for Teaching Kids to Code. [youtube] Intro to computer science just became Harvard’s most popular freshman class, outpacing economics, the campus paper reports. At Stanford, computer science is the #1 major. Yet in most K-12 classrooms, the subject is rarely taught. To change that equation, Code.org, a nonprofit whose mission is to get more kids to learn programming, has launched Code Studio — a set of tools, lesson plans, and curriculum to help students in kindergarten through high school explore the underlying concepts behind coding. Instead of learning a language such as Java or Python, as they would in an Advanced Placement or college course, students manipulate blocks of logic that, if properly sequences, will draw a shape or move a character. 5 Reasons to Teach Kids to Code. CodeCombat - Learn how to code by playing a game.

Cool Tools to Help Kids Learn to Code. When your kid starts talking about loops, go-to commands, and branches, it probably means she's learning to code, and that's a very good thing. In a technology-fueled world, coding is quickly becoming a prized, 21st-century skill. Plus, it encourages kids to become creators, not just consumers, of the technology they use. Coding apps come in a range of formats designed for different ages and abilities.

They often incorporate bright colors, cute characters, and elements of game design to appeal to kids. Code Avengers: learn to code games, apps and websites. TouchDevelop. Bitsbox - Monthly Code Projects for Kids. Why coding is for kids. The IT job market is growing by leaps and bounds – and governments and other organizations are ensuring children’s computer skills do, too If you’re reading this, you know how important digital literacy is for young people, not only in terms of their careers, but also their success in the wider world. Increasingly, politicians recognize this and a number of countries are finding ways to embed computer skills in their educational systems – and from a very young age. The UK is one of these countries. 5 Tools to Introduce Programming to Kids.

Digital Tools Arduino It’s hard to argue with the importance of teaching students how to use computers — how to turn on, log on, search the Web, and use applications.