AFR May 15. May 15. Jobless obsession offers PM’s best chance of survival Sydney Morning Herald, 5 18 2020. Future Outlook. The future of Australian jobs is strong, with the number of workers in most industries expected to grow over the next five years. 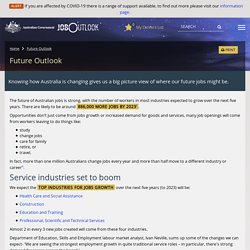 There are likely to be around 886,000 more jobs by 2023i. Opportunities don’t just come from jobs growth or increased demand for goods and services, many job openings will come from workers leaving to do things like: study change jobs care for family retire, or travel. In fact, more than one million Australians change jobs every year and more than half move to a different industry or careerii. Service industries set to boom We expect the top industries for jobs growth over the next five years (to 2023) will be: Almost 2 in every 3 new jobs created will come from these four industries. Australianjobs2019. 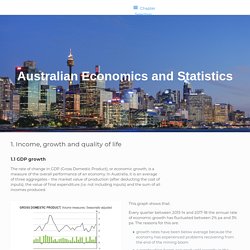 The reasons for this are: growth rates have been below average because the economy has experienced problems recovering from the end of the mining booma construction boom occurred until recently in the building of houses and home unitsgovernment infrastructure projects and mining exports are again contributing to growth. Australia has survived another economic shock, i.e. the slower rate of mining investment, and has maintained its long period of economic growth. We have now had 27 years without a recession. Australias Welfare Chapter 5 summary 18Sept2019. Centre for Future Work. Skills, Technology and the Future of Work.

Australia labour market – getting worse as unemployment and underemployment rise – Bill Mitchell. The Australian Bureau of Statistics released of its latest data today (February 20, 2020) – Labour Force, Australia, January 2020 – which continues to show that the Australian economy is in a weak state with a fairly moderate labour market performance being recorded for the start of 2020. 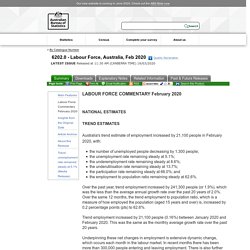 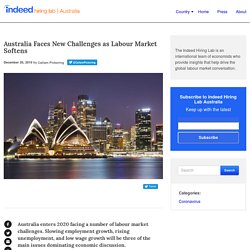 Wage growth has softened to 2.2% and remains below its average over the past decade in every industry except healthcare.Australia still has a youth unemployment problem, with young men struggling to find work and young women wanting more hours. The Australian labour market is showing signs of fatigue, with employment growth softening and unemployment drifting up. The economy has struggled throughout 2019, growing at its slowest pace since the beginning of the global financial crisis and prompting concern over the outlook for jobs. Calls are getting louder for greater fiscal stimulus in the form of programmes that promote economic growth and boost employment. Australia Labor Force Participation Rate. Labor Force Participation Rate in Australia decreased to 66 percent in February from 66.10 percent in January of 2020. 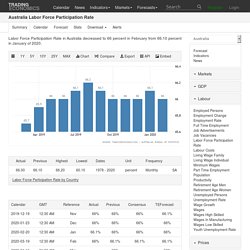 Labour Market Trends unemployment/underemploymentpart-time workcasualisation of workoutsourcingcontractorssub-contracting Unemployment/underemployment WATCH: Unemployment (YouTube clip by mjmfoodie) Part-time work and Casualisation of work Outsourcing, Contractors and Subcontractors Economic issues TASK: After reading and watching all the above material (and conducting further research), complete the following in detail:Assess the impact of labour market trends on individualsInvestigate the reasons for gender differences in labour market outcomes - is this guy right? 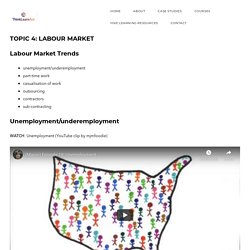